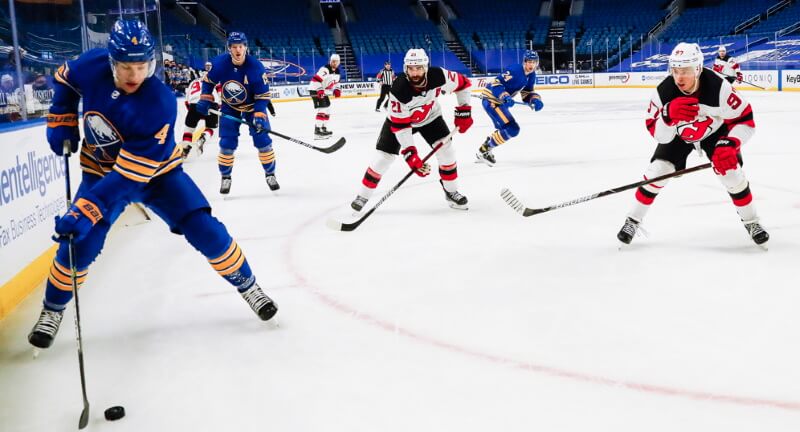 We’re almost a quarter of the way through the season – at least, most of the teams are. If your league is like mine, you’ve seen a ton of postponed players and red flags throughout your lineup. Covid-19 has hit the NHL in a massive way, but that doesn’t mean the games won’t be played. Is there a way you can take advantage of these postponed games? Let’s dive in and figure out three fantasy hockey trade targets to buy low and three players to sell high on.

When you look for trade targets to improve your fantasy hockey team, you should try to find players who have more to give than what they’ve done so far. Look for a player’s shooting percentage – is it lower than it normally is in their career? Have a look at their time-on-ice, specifically if they’re playing a lot on the powerplay. A powerplay can go hot and cold at any minute and it’s possible a player just hasn’t had the puck luck yet they need. Let’s look at some examples of trade targets we can buy low on:

What happened to Mike Zibanejad? After a large breakout season where he scored 41 goals in 57 games, Zibanejad is sitting at ten games played and only has one goal and two assists to show for it. He was bound to have some shooting regression after firing in 19.7% of his shots in 2019-20, but there’s no chance he finishes at only a 3.1% shooting clip this season.

Zibanejad still plays on the top powerplay unit and still has superstar Artemi Panarin to feed him pucks. He also has a good rate of 3.2 shots per game. Zibanejad scored 27 and 30 goals in the two seasons prior to this one on about a 12% clip, so those goals are coming VERY soon. All of this makes him a solid trade target. Find an owner who is worried and buy low.

I’m not going to lie – Malkin has looked rough at times this season. He has one goal through the first ten games and is only averaging two shots per game. Malkin tends to be a player who has extreme ups and downs but if you catch him on a hot streak, he’ll go bananas. He won’t shoot 5% all season long and the Penguins powerplay is only 24th in the league right now at 13.9% success.

That may turn around soon with their elite talent. Assistant coach Todd Reirden at Pittsburgh’s last practice specifically focused on the powerplay. The good news is Malkin was designated as the trigger man. Reirden was the head coach of Washington last season and, while their powerplay was only around 19%, Alex Ovechkin had a ton of chances to score and Reirden envisions Malkin as his “Ovechkin” for this top unit. Malkin is about to find himself with more opportunities to score. You could buy low with the right offer for a frustrated owner.

Hall is looking fantastic as a Sabre – this buy low play is more due to the Buffalo Sabres being one of the latest teams to have to postpone games due to Covid-19. Hall only has one goal so far but has been able to rack up eight assists on Buffalo’s potent powerplay. Despite this, maybe due to the lack of goal-scoring and rosters full of postponed players, Hall lost 0.7% of ownership among Fantrax poolies who simply dropped him to the waiver wire. That’s insane!

An owner could be tempted to pull the trigger if you offer them a player playing games right now who is slightly lesser in quality. Hall is only shooting around 3% right now and while he tends to be more of a volume shooter that hovers around a 9% finish rate at the end of a season, he’s playing with Jack Eichel, so that could skyrocket.

Other players I like if you have room to grab postponed players as trade targets include Kevin Fiala and Kirill Kaprizov of the Minnesota Wild and Nazem Kadri on the Colorado Avalanche – you could find great value taking on a postponed player who gives you more games at a later date.

It’s really hard to sell high on a player who is hot – nobody wants to trade someone who is producing a lot. The key is to look at future production potential for your squad. A player might have already produced a good portion of his final total. I like to look at players with an extremely high shooting percentage compared to their career average. It may be a sign a dry streak is coming soon. Let’s look at three players we can sell high on.

Toffoli is an amazing story so far this season. He is absolutely tearing up his former team in Vancouver with eight of his nine goals coming against them. He also is a strong possession player who shoots a lot every season. Sustaining 23.7% shooting though will be very hard. We can expect Toffoli to have a cold stretch at some point this season. It’s also wise to factor in Montreal’s multiple winger weapons who also can score goals and steal ice time. so right now if you can find an owner willing to pay you a star player with a proven track record, I’d sell high and cash in. Good sign? He’s still 16th in the NHL in shots on goal.

I love Joe Pavelski as a player and I took him in leagues this season. I felt great value in lower rounds after he only scored 31 points last year. He followed that up with 19 playoff points and then exploded to start this season with 15 points in 8 games, which includes two four-point outings.

We have to keep in mind that he’s 36 years old and shooting 30%, which is definitely unsustainable. Dallas is also firing a whopping 40% of their powerplay attempts into the net. In comparison, the deadly Edmonton Oilers powerplay last season fired at a 29.5% clip to lead the league. Dallas will hit more of an offensive wall as teams tighten up.

I’d be shopping him around to see what kind of big fish I could sell high for with more potential going forward. Good sign? He’s getting a ton of minutes (20 per game) because Dallas has a lack of center depth without Tyler Seguin. This includes plenty of top unit powerplay opportunities.

I have a few concerns about how well Patrik Laine will do in Columbus. I’m not sure who will be able to feed him for prime shots. Max Domi and Alexandre Texier are talented players but they’re not fantasy studs such as Blake Wheeler, Mark Scheifele, or Kyle Connor.

A lack of Columbus weapons may lead to teams shadowing him on the powerplay, which we saw already done by Dallas. I’m also a bit worried that John Tortorella has a tendency to bench players for bad defensive performances and Laine is not a very strong two-way winger, which on certain nights could cut into his playing time.

Laine will still shoot a lot and he’ll score. I also think he has big name value in pools with hype and buzz from the big trade. I’d be tempted to dangle him to sell high for a big package or player. Good sign? Although Tortorella has had run-ins with stars, he has found a way to make big names like Martin St. Louis, Vincent Lecavalier and Artemi Panarin put up large numbers.

For more help on the fantasy ice, check out this week’s Fantasy Hockey Waiver Wire!