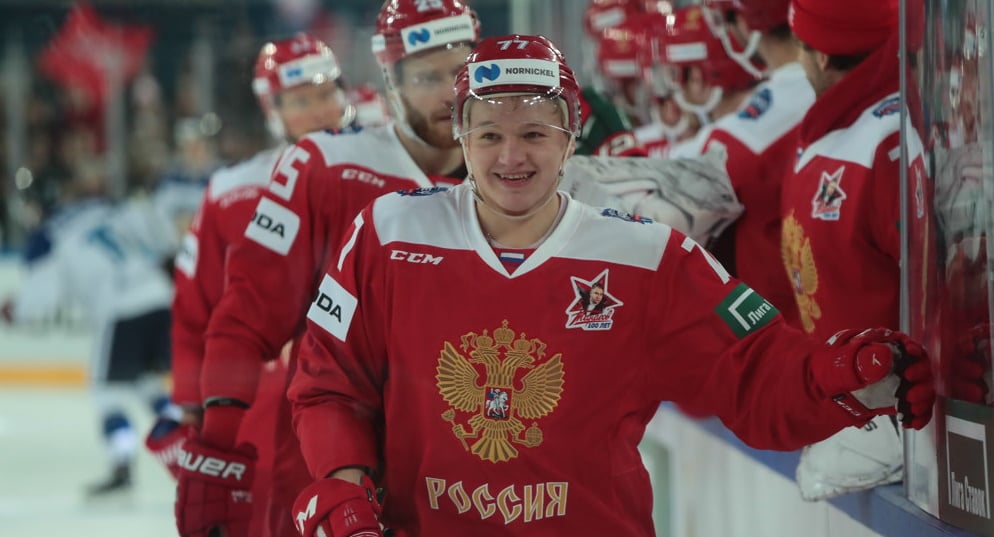 The first round of the 2020 NHL entry draft is in the books, and we now know where all the top talents are heading. Detecting who will be the top rookies is never easy, and there’s always some that have underwhelming starts, while others take the hockey world by storm. Here are the top 10 fantasy hockey rookies to watch for in the 2020-21 campaign.

The number one selection of the 2020 NHL entry draft, and it was no surprise. Lafreniere separated himself as the best in the draft class and should have no trouble cracking the Rangers roster. However, Lafreniere finds himself in a different situation than most players chosen first overall. The Rangers are a good hockey team, as evidenced by their 37-28-5 record this past season. They already have talented wingers, including Artemi Panarin, Chris Kreider, Pavel Buchnevich, and the 2019 second overall pick, Kaapo Kakko. This means Lafreniere could find himself in a reduced role in his rookie campaign.

He’s still an extremely talented player and there should be no hesitation in drafting him in keeper or dynasty leagues. Just be prepared for a possible slow start fantasy-wise.

The second overall selection in the 2020 draft, Byfield can be considered the successor to Anze Kopitar. He will likely start as the team’s third-line center, as the Kings have another rookie that could earn the second-line role. Byfield is a bigger body at 6’4″ and could learn to use his frame to play a physical game to match the Kings’ style. He has a very high ceiling, but like Lafreniere, may get a lower role to start out his career.

Taken third overall, Stutzle brings tremendous skill to the Senators. He should slot into their top six and could play either center or wing. He should play a prominent role, including power play time, and be a nice building block for the franchise. He’ll get plenty of chances to showcase his talent to the nation’s Capital. Don’t be surprised if he finishes the year with more points than Lafreniere and Byfield.

The 2015 fifth-round pick is looking like a steal for the Minnesota Wild. Kaprizov has been thriving with CSKA Moskva of the KHL, scoring 33 goals and 62 points in 57 games during the 2019-20 season. There was some hope that he could make his NHL debut during the play-in round vs Vancouver, but Wild fans will have to settle for this upcoming season instead.

Kaprizov should find himself in a top-six role for the Wild, possibly on a line with Kevin Fiala — the hottest player in the league before the pause in March. Don’t be surprised if he wins the Calder Trophy as the league’s best rookie this coming season.

Selected ninth overall in the 2019 entry draft, Zegras was considered one of the top playmakers in the draft class. He has the skill set to be a building block for the Anaheim Ducks moving forward, and he could get a chance to prove that this year. He will have to compete for ice time among Ryan Getzlaf and Adam Henrique, but if he can land a full-time role as a middle-six center with some power-play time, he could be an under the radar rookie to watch for.

Drafted 11th overall in 2017, Vilardi has been riddled with back injuries. Many were questioning if his career could be derailed, as he had played just a mere four games in total during the 2018-19 season. However, he made his recovery and got to work for the Ontario Reign of the American Hockey League. He posted 25 points in 32 games and earned a call up to the Kings. He surpassed expectations, scoring seven points in 10 games as the Kings were one of the hottest teams before the league paused. Vilardi could slot in as the team’s No. 2 center, flanked by Adrian Kempe and Jeff Carter.

Drafted fourth overall in the 2019 draft, there were thoughts that Byram could crack Colorado’s starting lineup last year. Now a year older and with some more development, Byram looks ready to take the next step. The Avalanche already have the 2019-20 Calder Trophy winner in Cale Makar, and could have another future top-pair defenseman right here. With the amount of firepower on the club between Nathan MacKinnon, Mikko Rantanen, Gabriel Landeskog, and Makar, Byram has plenty of quality teammates to generate offense with.

A second-round pick from the 2018 NHL draft, Romanov has been garnering plenty of attention, and Canadiens fans are eager to see him suit up for the club. He could find himself on a pairing with either Jeff Petry or newly acquired Joel Edmundson. Both are veteran defenseman that can mentor Romanov and allow him to take chances offensively. There is also an opening on the second power-play unit for Romanov to take advantage of.

Once he was given the net, the highly touted goaltender made the most of it. He posted a remarkable 10-2-0 record with a 2.52 GAA and .932 save percentage. He very quickly asserted himself as the top netminder for the Rangers. As a result, the Rangers bought out the life long Ranger and future Hall of Famer Henrik Lundqvist. Shesterkin will share the crease with Alexandar Georgiev, forming a formidable tandem.

Another highly touted goaltending prospect, Ilya Sorokin will look to make an impact as well. With Thomas Greiss bound for free agency, Sorokin can split the net with fellow countryman Semyon Varlamov. The Islanders are an incredibly stingy team defensively, which will make the transition to the NHL smoother for Sorokin. While it may be difficult for him to take the starting job from Varlamov, there’s no doubt that Sorokin is the future in net.

We’ll be pumping out more offseason hockey content than ever before. Check back soon on our full slate of offseason fantasy hockey news.