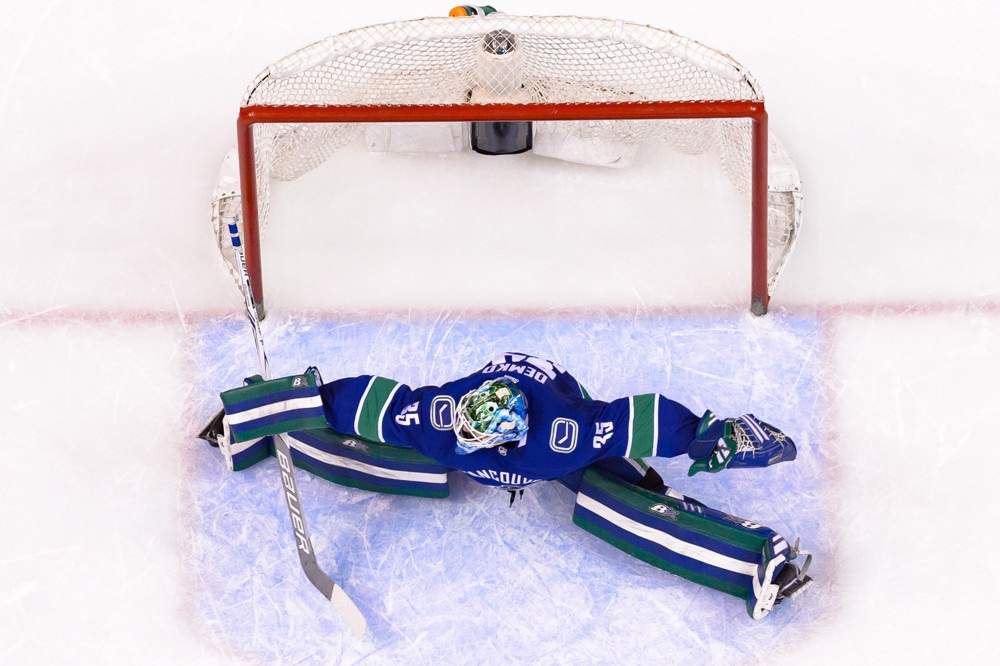 We are almost a third of the way through this chaotic season and maybe you have rocketed to the top of your fantasy hockey league like Bitcoin to the moon. Or maybe your plans for glory have already crashed faster than GameStop stock. Or, like most of us, you are somewhere in the mucky middle not knowing what to buy. In any case, making bets on fantasy hockey goalie streams for week 5 can make or break your matchups and here at FantraxHQ, we’ve got your back.

Today we are going to look at a handful of goalies with low ownership and analyze which ones are good buys for your fantasy hockey team this week.

The Buffalo Sabres play a back-to-back at home against the New York Islanders to start the week on Monday/Tuesday. There’s a good chance one or both of Ullmark and Hutton are available in your league. It is very likely they split those games versus an Islanders team that sits fourth to last in the NHL, scoring only 2.33 goals-per-game.

With Petr Mrazek (80%) still out following thumb surgery, Reimer will continue to get the bulk of the starts for the Carolina Hurricanes. The Canes have a very favorable schedule this week with four games at home. Reimer will probably play in at least three of those contests and might be available in your league. He will face the Columbus Blue Jackets on Monday, the Florida Panthers on Wednesday, and at least one of the back-to-back games against the Chicago Blackhawks on Friday/Saturday.

Keep an eye on whether or not Mrazek will be back for one of those back-to-back games. If not, have a look at Alex Nedeljkovic (19%), a high upside goalie, as he may get a chance to sneak a game in on the weekend.

Chicago Blackhawks rookie Kevin Lankinen is no longer a secret. With five wins in ten games played, Lankinen is sporting a respectable 2.55 GAA and a very attractive .924 SV%. The Blackhawks play four games this week with the first two on Monday/Wednesday in Detroit. The Red Wings are last in the NHL with 1.93 goals-per-game. If Lankinen hasn’t been scooped up in your league there is value to be had here.

Edmonton Oilers coach Dave Tippett loves Mike Smith. This week, so should you. Smith recently came off LTIR and has looked great in his first two starts. He allowed only one goal against in his first game versus Ottawa followed by a 38 save shut out of the Montreal Canadiens. The Oilers play four games this week, with a pair each versus the Winnipeg Jets and the Calgary Flames. You can bet Tippett will want to ride the hot hand and rest the struggling Mikko Koskinen (84%) who has played the most games (13) of any goalie in the NHL to date.

Sergei Bobrovsky (86%) makes all the money in Florida. But so far it’s Chris Driedger (41%) who is the money. The Panthers have a back-to-back on Friday/Saturday against the low scoring Red Wings.  Driedger (1.97 GAA and .937 SV%) is a great spot start if you need one.

Petersen has slowly been taking over the starting job in LA. In eight games played for the Los Angeles Kings Petersen only has two wins. However, his peripheral numbers (2.49 GAA and .924 SV%) are solid.  The Kings play at home on Tuesday against the Minnesota Wild and then two away to the Arizona Coyotes on Thursday/Saturday.  Both of those teams are in the bottom third of the league in scoring. Starting any Kings goalie comes with considerable risk as they allow a lot of shots. However they have also been scoring goals lately and Petersen should be up for the challenge.  If your league counts saves then consider picking up Petersen.

That’s it for fantasy hockey goalie streams for week 5. But while you are here, check out Fantasy Hockey Trade Targets – Buy Low, Sell High For Week 5, by Brennan Klak.