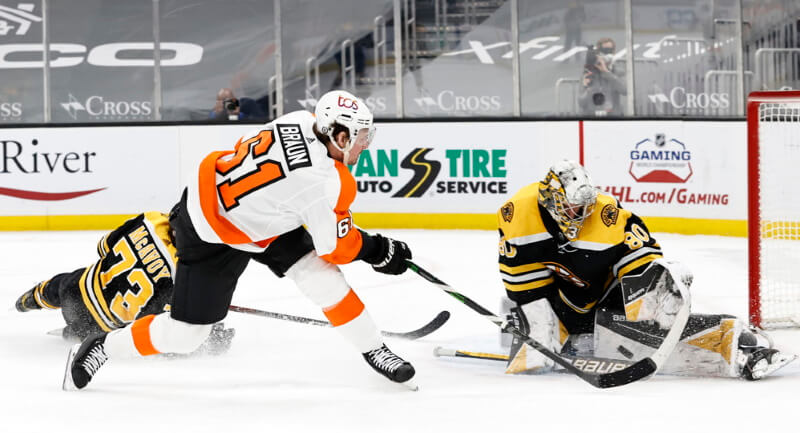 It’s crunch time now. Many of you are entering your weekly head-to-head playoffs or the stretch run in your rotisserie leagues. It’s as important as ever to make sure you are covered for your fantasy hockey goalie streams for week 13.

With Jaroslav Halak (69%) and Tuuka Rask (92%) still both on the shelf, we picked Dan Vladar last week as a good streaming option. Vladar did get an early start last Monday but he lost in overtime. As of this writing on Sunday afternoon, he is set to get his second game on the road versus Washington which won’t be an easy one. What we didn’t anticipate was the other Bruins rookie, Jeremy Swayman, getting three starts in a row in between. Swayman was wonderful in his first two career NHL games, winning both and making 71 saves out of the 75 shots he faced. His third game wasn’t as successful.  Swayman lost 3-2 in Philadelphia against the Flyers. Early indications are, however, that Swayman has a long career ahead of him.

Halak is considered day-to-day at this point so we don’t know exactly when he will be back but it could be soon. The Bruins play four times this week, all at home. They should win on Tuesday against Buffalo. It’s tough to say who will start that game. It may depend on how Vladar fares against Washington, but it could also depend on the health of Halak. Keep your eye on this as either Vladar or Swayman would be a good pick up if they get the call. Later in the week Boston plays a back-to-back versus the New York Islanders and then they end the week versus Washington again on Sunday. Monitor this situation and react as needed.

With Pavel Francouz (52%) now out for the season, the Colorado Avalanche decided to get some insurance for Philip Grubauer (98%). The Avs are expecting to go on a long playoff run. They probably feel recently acquired Jonas Johansson (9%), despite a shutout in his last game, is not going to give them the goalie depth they want.  Dubnyk has not been great the last couple of seasons. However, playing behind the third stingiest defence in the league should help him regain his form.

The Avalanche play four times this week. Monday at home to Arizona, Wednesday in St. Louis and then two at home versus the Los Angeles Kings on Friday and Sunday. Don’t be surprised if Dubnyk gets one or two of these starts including one of the easier match ups on the weekend.

So by now Campbell is definitely not a secret. He’s now 11-0 on the season and breaking Toronto Maple Leafs and NHL records. He is however still available in 30% of leagues somehow. If that’s your league then stop reading and go get him. The Leafs play four games this week. They start out versus Montreal and Calgary on Monday/Tuesday. Then they play Winnipeg on Thursday and Vancouver on Saturday.

We aren’t going to anoint Campbell the second coming of Patrick Roy. However, this is a great story that you can make part of your own fantasy hockey legacy. Assuming his health is 100%, you can expect Campbell to get three starts this week.  You can also expect Campbell to have a high chance of continuing his amazing streak.

Don’t look now but Martin Jones has been winning a lot of games lately. He has managed five wins in his last seven starts. With Devan Dubnyk traded the net is all his. The Sharks play four times this week with two against the Anaheim Ducks on Monday/Wednesday and then a back-to-back on the weekend in Minnesota versus the Wild. Recently promoted rookies Josef Korenar (3%) or Alexei Melnichuk (8%) could also get a chance especially in one of those back-to-backs.

That’s it for your fantasy hockey goalie streams for week 13. Check out our Top 5 NHL Ready Defensive Prospects For Your Keeper League.