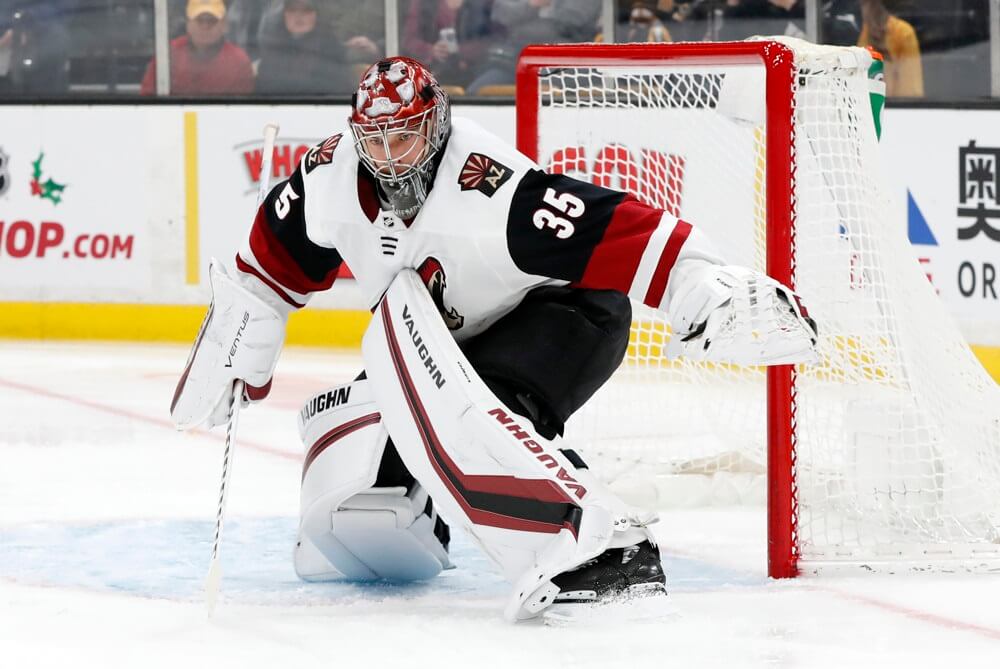 There’s just a month left in the season, which likely means your league is starting its playoffs or it’s right around the corner. See how goaltending around the NHL looks is the Fantasy Hockey Goalie Report.

Darcy Kuemper, ARZ: Kuemper has excelled lately, winning 10 of his past 12 games. He’s posted two shutouts over that span, most recently a 2-0 victory over the Flames.  He only allowed 22 goals during that 12-game stretch, and is giving the Coyotes a fighting chance to make the post season – despite all their injuries saying they have no business even being in the race. Even if Antti Raanta plays again this season, he’s be hard pressed to take the net away from Kuemper given his level of play. The Coyotes will visit Chicago and St. Louis in a back-to-back, before hosting Anaheim and Edmonton to close out the week.

Robin Lehner, NYI: Lehner missed Thursday’s contest in Ottawa after suffering an upper body injury. He was hit up high, so there’s concern it could be a concussion. Lehner has alternated between wins and losses over the past dozen games he played, but still remains one of the top options in the fantasy realm with his 2.19 GAA and .927 save percentage. Thomas Greiss receives an uptick in value as he becomes the definite starter in Lehner’s absence. There’s no word on how long Lehner will be out, but with the Islanders looking like a safe bet to make the playoffs, there’s no reason for them to rush him back. The Isles will face the Blue Jackets, Canadiens, Red Wings, and Wild. The latter two being a back-to-back, so if Lehner isn’t healthy by then, expect third string Chris Gibson to get a start on the weekend.

Carter Hart, PHI: Hart has missed the past six contests with his lower body injury, staying out of the lineup a little longer than initially expected. He’s gotten back on the ice, meaning his return could be happening this week.  Brian Elliott had been performing well going 3-0-1 before getting the hook in Wednesday’s matchup with the Capitals. Cam Talbot has finally seen some time in the Flyers crease, winning his one and only start. His other appearance with replacing Elliott. The Flyers will host the Senators and Capitals, before heading out to Toronto and Pittsburgh. Philadelphia can’t afford to take many more losses if they hope to remain in the playoff race.

James Reimer, FLA: Reimer is back to full health after missing five games with an undisclosed injury. He hasn’t returned to the crease though, and it looks like the Panthers are going to run with three goalies. Roberto Luongo is winless in his last five outings, coming close to a victory in Boston Wednesday night, before allowing two late goals to leave empty handed. Rookie Samuel Montembeault got his first career NHL win, stopping 25 of 27 shots against the Wild on Friday. He’s 1-0-1 in his young career. Florida is off until Thursday, then they head out on a California road trip, facing San Jose, Los Angeles, then Anaheim. It’s possible all three goalies each receive one start this week.

Cam Ward, CHI: Ward will be out for a week with a knee injury. Corey Crawford is healthy again and started three of Chicago’s past four games, with Collin Delia call up to serve as backup. Chicago will meet the Coyotes, Maple Leafs, and Canadiens this week.

Columbus in particular has two sets of back-to-backs. This means just two starts for Sergei Bobrovsky, perhaps even fewer considering he was scratched for Thursday’s contest against Pittsburgh. Joonas Korpisalo will get more time in the crease, or perhaps Keith Kinkaid will get his first start in a Blue Jackets uniform.

NHL Team with the Fewest Games

Los Angeles Kings: The Kings continue to struggle. Jonathan Quick has just one win in his last 10 games, with him posting a save percentage below .900 in eight of those appearances. Jack Campbell is doing well all things considered. His 2.24 GAA and .927 save percentage have him tied for fifth in the league. However this wouldn’t be the week to pick him up. The Kings will host the Predators and Panthers this week.

Vegas Golden Knights: Marc-Andre Fleury continues to be lights out, as he’s riding a four-game win streak that includes a pair of shutouts. The Knights are off until Friday, when they’ll head out to Dallas, before hosting the Oilers on Sunday. Expect Malcolm Subban to see some crease time as Vegas would be wise to give Fleury some rest ahead of the playoffs.

Did you find Brandon’s Fantasy Hockey Goalie Report helpful? For more great stuff on the fantasy ice check out our full slate of NHL content.