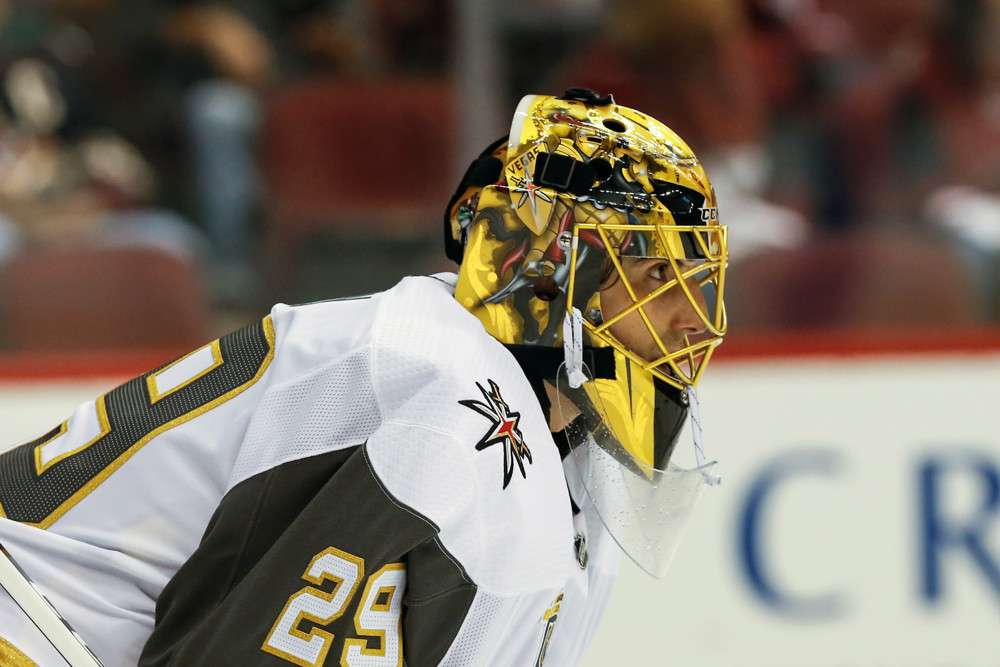 Welcome to the final edition of the Fantasy Hockey Goalie Report for 2018-19. Whether you’re making a late season push, or in the thick of the playoffs, this time of year is always critical. We have a few injuries, but the main focus today will be on the remaining schedules. Starters will get rested, so it’s key to know which team’s goaltending you should target, and which ones you should avoid. See it all in the Fantasy Hockey Goalie Report.

Marc-Andre Fleury, VGK: Fleury is day to day with a lower-body injury. It’s caused him to miss the past three contests, giving Malcolm Subban some playing time. Subban won those three starts, and should be a prime target with Fleury sidelined. The Golden Knights are sitting comfortably in a playoff spot, allowing the club to take their time and ease Fleury back into action.

Sergei Bobrovsky, CBJ: Bobrovsky is out with an undisclosed injury that saw him miss Thursday’s matchup. There’s no word on the severity of his ailment, but this makes Joonas Korpisalo an appealing option. Granted Korpisalo hasn’t won a game since January 15, he’s bound to get back in the win column. The team in front of him should be playing with some urgency considering their playoff hopes are on the line, and that could translate to some success for the 24-year-old.

Laurent Brossoit, WPG: The Jets backup netminder was forced to exit Thursday’s game with a leg injury. Eric Comrie has been summoned to fill his role, but don’t expect him to see much ice time if any at all. If you had Brossoit on your team because of his .925 save percentage, you’d be wise to seek out a replacement for the week.

Buffalo Sabres: The Swords have the rare five-game week, where they’ll take on the Devils, Senators, Red Wings, Islanders, and Blue Jackets. Only two of those opponents are in the playoff race, making this an even better week for Carter Hutton and Linus Ullmark owners. It’s possible one or both may be available in your league. Hutton has been getting the majority of the starts recently, starting in five of the past seven contests. However, Ullmark is more than capable of seeing crease time, as he’s appeared in 33 games this season. Both goaltenders offer a chance at snagging a couple of wins, with each likely to start at least twice, due to a pair of back-to-backs.

NHL Teams with the Fewest Games

Colorado Avalanche: The Avalanche play just twice, versus Vegas on Wednesday and Arizona on Friday. Semyon Varlamov has started just once for the club in their past five outings, and he hasn’t won a game since March 5. Philip Grubauer has stolen the spotlight, winning three consecutive games while only allowing two goals against in the process. This might be the time to part with Varlamov, if there are other options available on your waiver wire with a better schedule. At the very least, swap him out for Grubauer if you can.

Tampa Bay Lightning: The tandem of Andrei Vasilevskiy and Louis Domingue have been rock solid all year, but they could let you down at the worst possible time simply due to their schedule. They host the Bruins on Monday, then don’t play again until Saturday when they meet the Capitals. Not only do they have a light week, but it’s against two strong opponents. You simply can’t drop Vasilevskiy, but it wouldn’t be a bad idea to drop Domingue. If you happen to have both of them, I’d recommend adding a third goalie to your roster. Preferably someone from the above list with four games, so you have a fighting chance to match your opponent’s win total.

Now if your league goes until April 6, perhaps a two-week championship round, it’s best to know what schedules look like from that perspective.

Lastly, the Anaheim Ducks are featured in only FIVE games down the stretch.

We hope you’ve enjoyed the Fantasy Hockey Goalie Report. Best of luck the rest of the way!

Did you find Brandon’s Fantasy Hockey Goalie Report helpful? For more great stuff on the fantasy ice check out our full slate of NHL content.