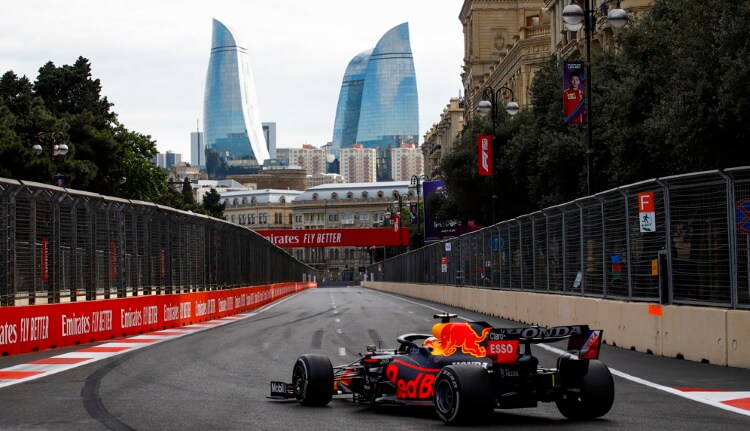 Welcome to Fantasy Formula 1! The newest sport on Fantrax is here, so grab your friends, start a league, and get to select your drivers. It’s Round 6 and the fourth race is the Azerbaijan Grand Prix this coming weekend in Baku. We are here to help you with your driver selection! For a thorough explanation on how the sport and fantasy sport of Formula 1 works check out our explanatory piece from last week.

Just like the past couple weeks, we’ll rank all 20 drivers in order of how we think they’ll score this week! These rankings should be applicable for nearly everyone playing Formula 1 on Fantrax, regardless of their scoring/lineup configuration! Note that these rankings are not in order of expected finishing position, but instead in order of expected fantasy points scored. That means they are incorporating all the scoring categories like finishing ahead of your teammate, places gained and lost, etc.

Verstappen leads the Drivers Championship and is favorite to win in Baku. He even gets the added (fantasy) benefit of being expected to be outqualified by Leclerc, but ultimately out-finish the Ferrari (thus higher expected places gained)

Favorite to qualify on pole and get the fastest lap, Leclerc continue to show some of, if not the, fastest pace on the grid yet still often finish behind his championship rival. Will he avenge his heartbreaking loss in his home Grand Prix? Decent chance.

Perez got his first win of the season in Monaco and sits in 3rd, in striking distance in the Championship, only 16 points behind Leclerc.

Sainz tied his best placement of the season, finishing 2nd in Monaco. Yet he still sits just behind the 3 in front of him and far in front of the 16 behind him.

Russell has now gone 7 for 7 on top 5 finishes and placed 5th yet again in Monaco. He has handily been the best of the rest and that trend is expected to continue. He’s also finally favored to beat his former champion teammate, Lewis Hamilton (after beating him in the last 6 races).

Bottas’s racecraft continues to serve him well in fantasy, finishing near the top of the midfield, and gaining places to boot. Again, he’s our Tier C pick of the week.

Gasly’s season has been quite up and down but once again he’s expected to out-finish his qualifying place and finish just inside the points.

Alonso finished P9 in Barcelona, then P7 in Monaco. His season looks to be on an upward trajectory after a rocky start, and he’s expected to out-finish his teammate, Ocon again.

The midfield stagnancy continues for the 7-time champ. Any race now we’re hoping for some improvement from the Mercedes cars to make the title race (and Constructors) a bit more interesting. In the meantime, his 2 places gained in the last 4 races isn’t good enough for anything better than 9th. The upside’s certainly there as Russel has continued to demonstrate, but so far it hasn’t been achieved frequently.

Norris has the talent to qualify quite well often, but his car leaves him a bit lacking on race day and thus he has more common downside, via places lost.

KMag DNF’ed in Monaco and his early season points finishes look like a thing of the past unfortunately for Haas. He’s still got a better chance than most of the drivers below him though and not a particularly great qualifier so opportunity for places gained exists. Also, still our Tier D pick of the bunch.

Vettel is our riser of the week after an impressive P10, points finish in Monaco. There’s a former world champion in there somewhere and positive signs are emerging. He’s expected to gain the most places of any driver in Baku.

P12 in Monaco, expected to finish P12 in Baku, and lose to his teammate Alonso, Ocon doesn’t offer a ton of paths towards points this week.

The Alfa’s pace relative to Zhou’s poor qualifying record continues to serve him as his 1 positive in fantasy.

The underwhelming streak continues. Danny Ric needs to do something, anything to jumpstart his season.

Tsunoda has a better car than some of those in front of him, but because he has one of the biggest gaps to his teammate (Gasly) and he’s not expected to finish in the points, its often for naught,

Lack of upside continues for the Canadian. Vettel’s resurgence hurts as well.

The rumors of Latifi being replaced for Williams continue. He’s admitted time and time again that he’s not fully comfortable with the car and he’s shown it weekly.

Schumacher continues to struggle the most on race-day, with another DNF in Monaco. Places lost continue to be his worst enemy. He hasn’t gained a single place in 5 weeks and lost many.

After DNF’ing last race, Albon is favored to outqualify Zhou, Stroll, Latifi, and Vettel but ultimately only finish in front of his teammate, Albon due to the Williams bottom-of-the-grid pace.

Now get picking and enjoy the next Formula 1 race weekend!