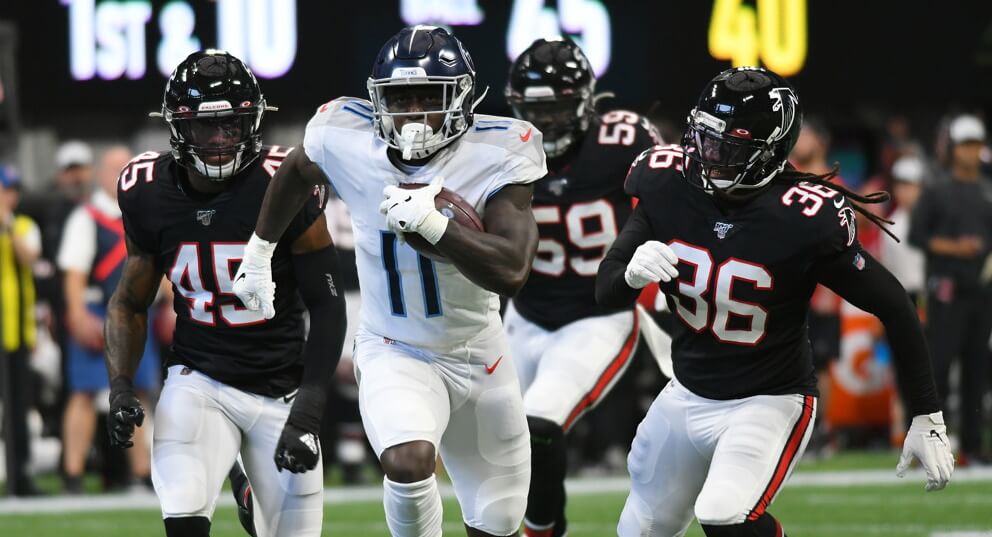 It has already been noted that not having the services of key players on byes and some significant injuries will make this a challenging Fantasy Football Week 8. You could make quite a starting lineup out of guys who may or did not play this week: Patrick Mahomes, Ezekiel Elliott, David Johnson, Amari Cooper, Adam Thielen, Kerryon Johnson and Mark Andrews could fill out the skill position spots. Fortunately, we have both sensible and daring suggestions for you this week. Our Week 8 Start’em and Sit’em column spotlights quality streamers, guys who should get the calls in tough decisions, and those you should leave on the bench anyhow

Ty Johnson vs. NYG: The sixth-round rookie will take over as the starter for the injured Kerryon Johnson and will be the lead RB for Detroit against the Giants, who have allowed the second-most rushing yards in the NFC to running backs. Johnson does not have a lot of upside but should get enough of a workload and the first chance at goal-line carries, so he is a useful plug-in for Fantasy Football Week 8.

LeSean McCoy vs. GB: His numbers aren’t great and the Chiefs offense will be without its main offensive generator, but McCoy is a decent flex play if you need a streamer. He averages 61 yards per game from scrimmage and could see a few receptions if the Chiefs play from behind against the Packers. He may also see an adequate amount of carries as K.C. could lean more on the run this week. If he gets in the end zone you’ll get a pretty good Fantasy return from McCoy. The Packers allow the second-most Fantasy Points Per Game to RBs among NFC teams.

Devonta Freeman vs. SEA: If Matt Ryan plays, it could be a high-scoring game and Freeman will be a TD threat as both a runner and receiver. If Matt Schaub starts, Freeman could get a lot of work as both a runner and pass receiver as the QB dinks and dunks. Either way, Freeman is a quality start in Fantasy Football Week 8 as the Seahawks have allowed nearly 45 receiving yards per game to RBs (Top 10 allowed in the league) and that has been Freeman’s specialty this year.

A.J. Brown vs. TB: He was my favorite WR pickup of the week and he is my most notable streamer at the position. The rookie has shown flashes of big-play promise (two 50-yard receptions) and is starting to show he can be a frequent target overall (team-high eight targets in Week 7). This is the week it all comes together in a breakout performance against the NFL’s worst pass defense. Don’t miss it.

DK Metcalf vs. ATL: He made a big and decisive mistake in a loss to the Ravens last week, losing a fumble that was returned for a TD. The coaching staff will want to put it behind him and they’ll draw up some big plays for Metcalf in Fantasy Football Week 8. The big-play rookie is averaging 19.5 yards per catch and the Falcons have allowed the second-most receiving yards to wideouts.

Kenny Stills vs. OAK: Here is a very nifty option in Fantasy Football Week 8. If you are scrambling for WR help, Stills may have one of his best games of the season against the Raiders, who allow the second-most FFPG in the NFC to wide receivers. Stills will assume the downfield role of Will Fuller against a very vulnerable Oakland secondary.

Jonnu Smith vs. TB: The Buccaneers allow the second-most FFPG to opposing TEs, and it’s not looking good for Delanie Walker to play this week. Smith caught passes of 35 and 24 yards last week and Ryan Tannehill showed the willingness to go to his TEs in key situations.

Josh Hill vs. ARI: Savvy Fantasy players well know the Cardinals are the worst team against TEs, and Hill could be the No. 1 option at the position for New Orleans this week.

Ryan Tannehill vs. TB: Yes, we are loading up against Tampa Bay. Tannehill threw for over 300 yards in his first start as a Titan and is an excellent plugger at QB in Fantasy Football Week 8.

Josh Allen vs. PHI: He could deliver his best passing performance of the year so far. Allen has only seven TD passes in six games and has not thrown for 260 yards yet, but he is not afraid to gun downfield and the Eagles have allowed the third-most passing yards in the NFL. Of course, there is always the additional bonus of his rushing production.

Joe Mixon vs. LAR: If he does not get a TD, the final Fantasy numbers may be awful. The Bengals will fall behind fast and that could mean you will see a lot of Giovani Bernard in Fantasy Football Week 8. This season, he only has 37 less snaps than Mixon.
Royce Freeman vs. IND: He has been a decent streamer, but the Colts are second-best in the AFC in FFPG allowed to RBs and have allowed just two rushing scores.

Frank Gore vs. PHI: The Eagles have been better defending ball carriers than pass-catching RBs this year, and Gore has only seven receptions. This could be a Devin Singletary week for the Bills.

D.J. Moore vs. SF: The 49ers have the best pass defense in the league, and it will be a lower-scoring affair between the Panthers and Niners.

Alshon Jeffery vs. BUF: The Bills are third-best in the AFC in FFPG allowed to WRs. They will stifle Carson Wentz’s top target in Fantasy Football Week 8.

Mohamed Sanu vs. CLE: The Browns are getting healthier in the secondary and it will only be Sanu’s first game with his new team. It’s too risky if you have a better alternative, but he will see a rise in production soon after this week.

Greg Olsen vs. SF: It’s better to stream a Jonnu Smith or Josh Hill in Fantasy Football Week 8 than use Olsen against the NFC’s best team against TEs.

Philip Rivers vs. CHI: The Bears defense is going to bounce back after a bad outing against the Saints last week.

Jameis Winston vs. TEN: Yup, it’s all about the Titans in Fantasy Football Week 8. A road mismatch for an overhyped, turnover-prone and erratic QB.