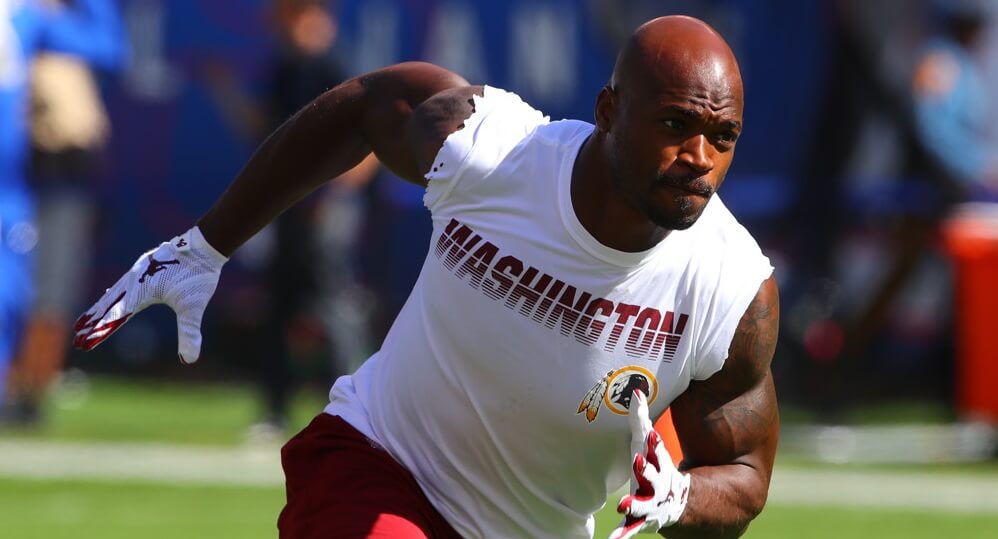 There are four teams on byes in Fantasy Football Week 6, and the lineup decisions now get more challenging. There are at least four teams off in six of the next seven weeks. You have to tap into your reserves now and start pulling players off the bench. We help you make the tough calls here when you have to dip into your depth.

For help getting ready for NFL Week 6, check out our Week 6 Waiver Wire Recommendations, Week 6 FAAB Guide and Week 6 Fantasy Football Rankings! Or if you want to get all defensive about things, then check out Gary Davenport’s IDP Sleepers!

Adrian Peterson vs. MIA: Washington interim head coach Bill Callahan is vowing to establish more of a run-heavy approach behind his future Hall of Famer. Peterson is still capable of delivering quality performances on occasion. This week will be one of those occasions against a Miami defense that allows the most Fantasy Points Per Game to opposing running backs.

Carlos Hyde vs. KC: He has scored in two of his past three games and could be headed for his best game yet as a Texan. The Chiefs allow the most rushing yards in the AFC to opposing RBs and Hyde could also find the end zone more than once in Fantasy Football Week 6.

Damien Williams vs. HOU: The Chiefs-Texans game is expected to be high scoring and will involve a lot of significant RB contributions. Williams took 56 percent of the snaps at RB last week and is back as Kansas City’s lead guy. No team in the NFL has allowed more RB receptions than Houston and Williams should get in the end zone, too.

Curtis Samuel vs. TB: Some NFL teams try to fix their weaknesses and can succeed. Others just have to deal with the fact some things are broken. The Tampa Bay secondary is broken and allows the most FFPG to opposing WRs. Fire up Samuel and D.J. Moore with confidence in Fantasy Football Week 6.

Stefon Diggs vs. PHI: Last week, Adam Thielen got the catches he wanted as the Vikings revived their passing game. This week it will be Diggs’ turn against the very vulnerable Philadelphia secondary.

Dede Westbrook vs. NO: The D.J. Chark/Marshon Lattimore WR/CB matchup will be one to watch for sure this week. While those standouts are battling it out, Westbrook will roll up some good numbers working out of the slot against New Orleans.

Gerald Everett vs. SF: The 49ers are the best team in the NFC against opposing TEs. But Everett is coming off two quality outings, including a career day in Week 5. Unless you have another prime TE on your roster who is Top 6 or 7 at the position, you have to look past the Fantasy Football Week 6 matchup here. You have to play your best guy if it is Everett, or if you must use him in place of Darren Waller or Evan Engram.

Noah Fant vs. TEN: If you have to dig deep for a TE option this week, take a chance on the very talented but still evolving Fant. The Titans have allowed an AFC-high four TD receptions to the position.

Kirk Cousins vs. PHI: He is a Top 10 Fantasy starter this week. The matchup is ideal against the Eagles, who have allowed the third-most passing yards in the NFC.

Kyler Murray vs. ATL: He has not quite delivered on his full potential yet, but he is showing signs of a true breakout game to come soon. He’ll have to carry a significant offensive load in one of the highest-scoring affairs in Fantasy Football Week 6.

Jordan Howard vs. MIN: If you have another viable option in the same Fantasy RB2 range, go with the alternative. The Vikings are fifth-best against the run in the NFC and have allowed one rushing TD.

Malcolm Brown vs. SF: Even if he starts this week, you should have second and third thoughts about using him if you have another quality option. San Francisco is the NFC’s best in terms of FFPG against opposing RBs and has not allowed one to score via run or pass.

Robert Woods vs. SF: He has been unreliable this season and the 49ers defense has been second-best against opposing WRs in terms of yards allowed. If you have another good option to use over Woods in Fantasy Football Week 6, reserve him.

Marquez Valdes-Scantling vs. DET: The Lions are third best in the NFC in terms of allowing yards to opposing WRs. MVS has not shown he is capable of stepping forward when needed to play a larger role.

Emmanuel Sanders vs. TEN: He has made an admirable return from an Achilles injury, but has been unreliable. Don’t expect too much from Sanders in a low-scoring game.

Delanie Walker vs. DEN: If you have another quality Fantasy TE, reserve Walker in Fantasy Football Week 6. He has two catches in his past two games.

Jared Cook vs. JAC: Last week, he had season highs of four catches and 41 yards. If you have another decent option, avoid using him in Fantasy Football Week 6.

Aaron Rodgers vs. DET: It is a new era in Green Bay, where they actually have a running game, and it has overshadowed Rodgers. Detroit-Green Bay won’t be an incredibly high-scoring game, either.

Jared Goff vs. SF: He has been recapturing better form recently, but as we have indicated throughout, the Niners defense is very sturdy. They have allowed the least FFPG to opposing QBs among NFC teams.