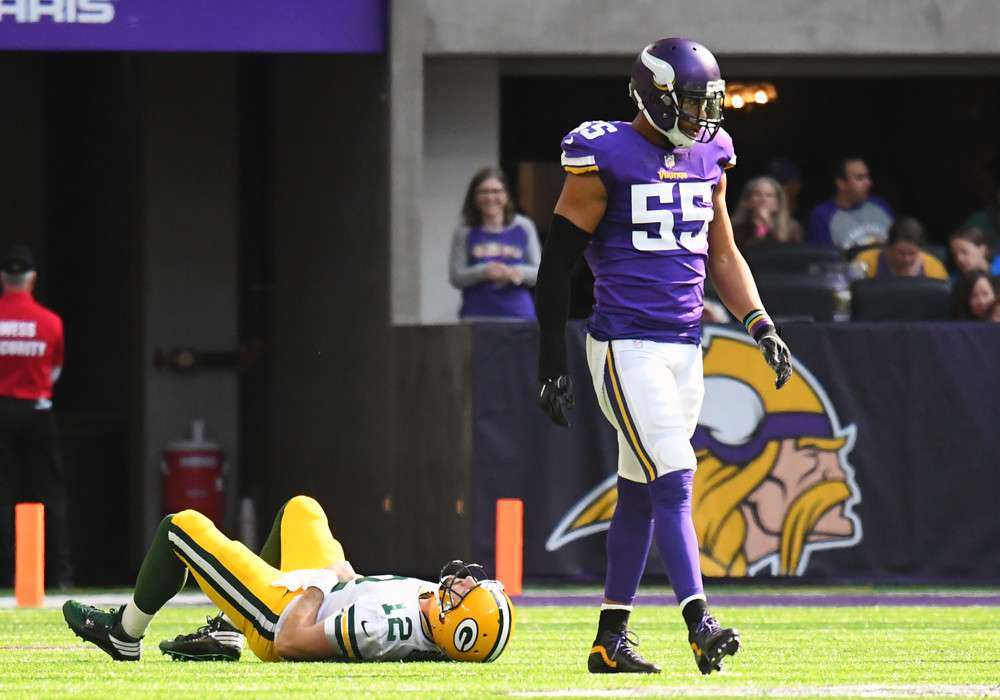 Thank god we finally saw the return of a little smashmouth football in Week 6. Many of the game’s elite RB’s shone brightly on Sunday, but Le’Veon Bell was once again among the standouts, rushing for 179 yards and a TD. If I could somehow show the same kind of patience whilst driving as Bell does waiting for a hole to open up in the backfield, my blood pressure would be several points lower. Seriously though, Bell’s 28.1 fantasy points against the Chiefs D/ST was widely unexpected. Then again, you can’t assume anything this year. This week we say goodbye to Aaron Rodgers, hello to Adrian Peterson, and all the rest. Here’s everything else I saw in Week 6:

Kareem Hunt is the ultimate jack-in-a-box. He winds you up with a lousy four rushing yards in the first half, and just when you think this might finally be the week where we see some regression, he suddenly explodes with a casual 110 combined yards and 16 fantasy points. I guess a lot of this can be blamed on the Chiefs’ playcalling, and the Steelers D/ST was phenomenal in the first half clogging up any rushing lanes, but still, when does this stop? Perhaps the only takeaway we can make from this game is that when Hunt is limited to the 21 yards he saw on Sunday, Alex Smith’s job becomes ten times tougher. On the final play of the game he failed to even throw in the vicinity of a wide receiver on 4th and 15, and with Tyreek Hill also putting up only 34 yards, suddenly the Chiefs’ once methodical offense, looked a little lost.

Normally this section is dedicated to a big-time, unexpected breakout, but let’s talk Laquon Treadwell for just a second. It’s not a huge secret that the Vikings have been keeping Treadwell’s talent under wraps for the past two years. On Sunday, though, he had a catch that basically turned the clock back, and highlighted why you may want to consider adding him to your fantasy team if you’re desperate at receiver. The one-handed catch on the sideline was huge, so too was Treadwell’s crucial block and the fact that he nearly forced a fumble. This might apply to those of you in dynasty leagues, but Treadwell’s 51 yards on three targets really can’t go ignored. Stefon Diggs’ groin injury should line Treadwell up for a lot more targets, and since he’s owned in less than 1% of leagues, he’s worth the reward. If you need further convincing, just take a look at Adam Thielen’s explosion onto the scene last season. From catching 12 passes in 2015 to nearly 1,000 overall yards the very next year, anything is possible in the Vikings’ offense.

And this week on Top 20 receivers doing sweet, sweet, nothing, Terrelle Pryor! Against San Francisco, you’d expect the Redskins to be spreading the ball around, and while they certainly did, Pryor accounted for just 23 yards and three receptions. He’s now caught just 10 passes since his multi-reception outing in Week 1, and with the Redskins offense looking extremely unpredictable each week, it’s hard to find value in Pryor going forward. A lot could also be made of Kirk Cousins and Pryor’s lack of chemistry in the preseason. Often the two were completely on opposite pages, and with owners now scrambling for a receiver that will offer more than just 42.9 fantasy points across a five-week period, you have to consider other options with Pryor having hot and cold weeks. Two potential candidates: Marqise Lee and Nelson Agholor.