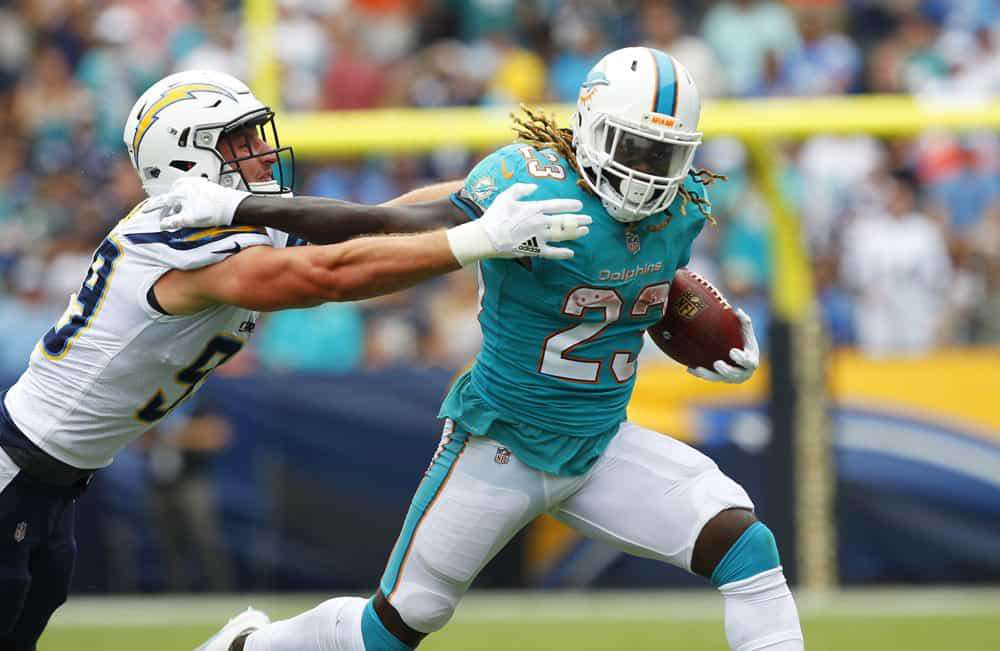 Fantasy football is supposed to be fun, right? I don’t know about you, but I can’t say I signed up for all these injuries. It’s only Week 3, and already it feels like the only thing being exercised other than the IR list is owners’ patience. Stay calm, though, the weekly rankings march on. Just an FYI, there are some guys missing this week, and a bunch more guys that COULD be missing come Sunday.

The quarterback list basically remains unchanged this week, and in fact, it’s probably the most injury-free position going. I’m sure Jaguars fans would take a Blake Bortles injury (kidding!), but this could finally be the week we gain an understanding of who and what Cam Newton is all about. Weeks 1 and 2 have been entirely unconvincing, and so is Cam’s 59.6% completion rate. So far Brian Hoyer and Trevor Siemian have completed more passes than the 2015 MVP, and after Newton missed a wide open Christian McCaffrey in the end zone last week, it’s clear he’s simply trying to throw the ball too hard. Chalk it up to post shoulder surgery rust, but Newton and the Panthers need to show they can hang with the big dogs in the NFC when they take on the Saints at home this week.

There’s plenty to digest here. Week 2’s standout Chris Carson remains an interesting waiver wire option for owners, but so does Derrick Henry on the back of a big 92-yard, one-TD performance. DeMarco Murray has some injury concerns of his own, but “concern” certainly is the operative word for owners right now. Murray has managed just one run of 15 yards or more in the first two weeks and has seen just four targets in the air. As always, err on the side of “it’s still early,” but it really is becoming harder and harder to own the veteran with Henry showing promise, and other interesting players like Carson and Tarik Cohen emerging.

There are some interesting names toward the bottom that could easily leapfrog a whole bunch of guys if things keep going their way. Jaron Brown was massive for the Cardinals against the Colts last Sunday, posting 73 yards on just four receptions. Brown was a popular sleeper pick entering the season, and John Brown’s injury certainly opens up a world of opportunity. By the way, speaking of opportunity, big props to Keenan Allen for the making the most of his. There’s not much to be said about the Chargers at the minute, but there is a lot to be made about the targets Allen is seeing. Phillip Rivers has thrown his way 19 times for 135 yards so far this season, and already, Allen is on pace for career highs. It’s great to see he hasn’t faded into obscurity after some freak injuries.

Once you get past the initial anger of Greg Olsen’s injury, you’ll realize this cloud has a silver lining. If you’re stuck on the waiver wire, Jack Doyle is one of your options. He posted 75 yards last week against the Cardinals, a team that completely shut down tight ends last season. David Njoku is also a name to watch. The Browns lost Corey Coleman to a broken hand (again) on Sunday. With Kenny Britt looking out of sorts, Njoku could be in for some serious targets.

Two AFC South teams took a big hit this week as the Texans and the Jaguars fall from the Top 10. Instead, we welcome back the Rams, as they take on the 49ers on Thursday. San Francisco allowed four hits last week against the Seahawks, but Brian Hoyer still managed to throw for a lousy 99 yards. This could be a big day for the 28% of owners invested in the Rams.

No one’s safe anymore. Justin Tucker missed a field goal last week, but you still have to like him against the Jaguars D/ST. I’m gradually growing more and more impressed with Dan Bailey. He kicked four field goals last week, two of which were from 40 yards or more. Blair Walsh also jumps into the Top 10 against the Titans. He did miss an extra point last Sunday, though, the same old kryptonite that cost him a job in Minnesota last season.