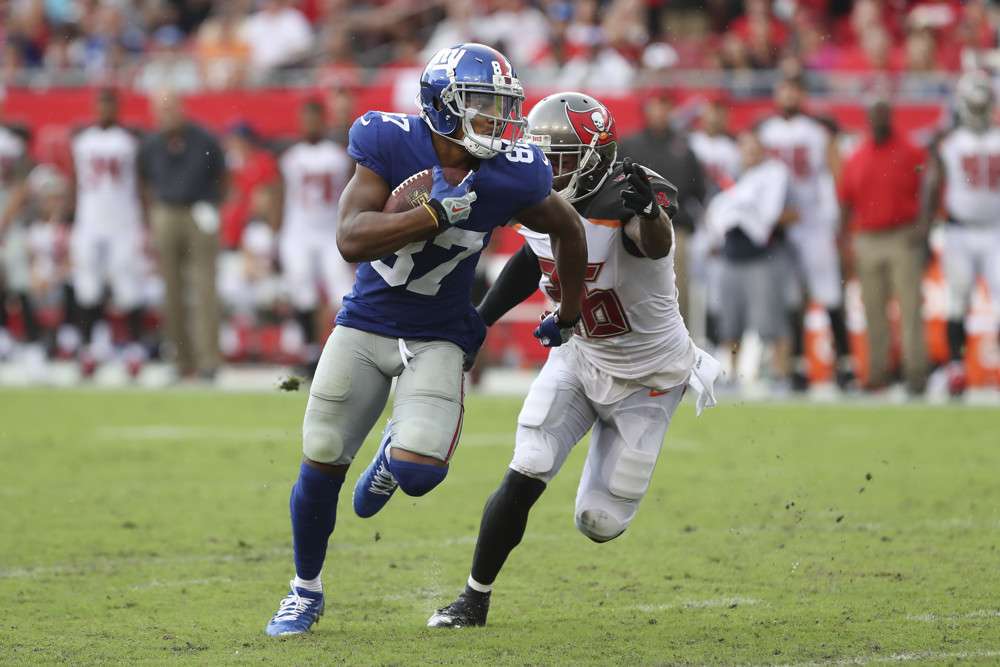 We’re back with another wide receiver matchup report. Another four teams are on bye, making it difficult to deploy a fully-powered lineup. No worries, as our favorable matchups include two players, one being the Giants’ Sterling Shepard, who are usually flex plays that could be WR2s this week. Not to mention, our sleeper pick is unlikely to be owned in your league and could provide some instant production for your lineup. If you have any questions feel free to ask me on Twitter, @JonSauber.

After a massive performance on Monday night, Marvin Jones has become a hot commodity in fantasy football. He should be able to continue his momentum this week against the Cleveland Browns. Jones has 36 targets in his last three games and has produced because of it. He’ll be going up against a Browns defense that stops the run well but is awful against the pass. I imagine Jim Bob Cooter’s gameplan will involve a heavy amount of pass attempts, which should mean a big workload for Jones. Deploy him as a WR1 this week that should once again get at least 10 targets.

In his return performance against the Rams, Sterling Shepard hauled in five catches for 70 yards. While not spectacular, it was a promising line considering the opponent and the ineptitude of the Giants’ offense. His nine targets last week should be around the expectation going forward for the former University of Oklahoma standout. Shepard gets a San Francisco defense that struggles against the pass, and that should mean a big day considering his target share. Shepard is a WR2 this week who could do even more damage if one of his 8+ targets comes in the end zone.

The Tampa Bay Buccaneers have one of the worst pass defenses in the NFL, giving up over 270 passing yards per game. This week, they face a surprisingly good New York Jets offense that has featured Robby Anderson in recent weeks. Anderson has a touchdown in three straight games and is a good bet to make it four straight in this matchup. He doesn’t get a huge number of targets, but I wouldn’t be surprised to see him get anywhere from seven to nine targets this week. He will likely see more than one of those at least 20 yards down the field, further aiding his fantasy value. Anderson is in line for the week of a WR2 and has even more upside if he hauls in more than one of those deep targets.

This may come as a surprise, given the Broncos’ status as a top-tier passing defense, but there is a major factor that should contribute to Brandin Cooks having a big day. That is, Chris Hogan has already been ruled out for this Sunday night’s matchup. Without Hogan, Cooks should be the number two target for Tom Brady (behind Rob Gronkowski), and he has massive upside. Cooks has the ability to take any play the distance, and he’ll be facing a Broncos defense that is coming off a rough outing against the Philadelphia Eagles. The Broncos defense won’t be aided by their offense, so expect multiple turnovers that give the Patriots the ball in Broncos’ territory. That means even more red zone and scoring opportunities for New England, giving their entire offense a big boost. For Cooks, that means 10-12 targets with a good majority of those coming in Denver territory.

Last week, the world got to see what Jalen Ramsey was capable of. Ramsey frustrated A.J. Green to the point of no return, when Green choked Ramsey and punched him in the helmet. Green is one of the most composed players in the league, and to see him lose his cool like that says a lot about Ramsey. This week, expect to see Ramsey take on Keenan Allen, who already has struggled to find the end zone this year. This week won’t be the week for him to fix those issues, and I’d be hesitant to start him in season-long formats.

If you own Jordy Nelson in a league, you already know why he’s here. Nelson’s fantasy value took a huge hit when the Packers lost Aaron Rodgers to a broken collarbone. He and Rodgers had fantastic chemistry that allowed Nelson to become one of the best fantasy receivers in the league. Unfortunately, with that chemistry now irrelevant, so is Nelson in fantasy. His new quarterback, Brett Hundley, holds on to the ball for far too long in the pocket and doesn’t seem to trust his receivers to make a play. Nelson is a WR3 the rest of the year for me, and someone that isn’t even on my radar in daily fantasy. Put him in your lineup at your own risk, as his value is entirely dependent on finding the end zone.

Well, this is weird. At no point did I expect to have a receiver facing the Saints in this column, but here we are. The Saints defense has been fantastic the last few weeks, and they’re led by rookie corner Marshon Lattimore. Lattimore has been phenomenal this season and has shadowed opposing receivers. I expect him to follow Kelvin Benjamin around this week, putting a damper on Benjamin’s debut with the Bills. Benjamin, like Nelson, will have to find the end zone to be relevant this week. That won’t be easy when Lattimore is locking him down on Sunday.

Sleeper of the Week

With Mike Evans suspended, the Buccaneers will have a boatload of targets to disperse throughout their offense. His replacement in the lineup should be in line for a good number of those. Chris Godwin had a prolific career at Penn State, including a Rose Bowl performance when he beat up on Adoree’ Jackson. This will be his first major opportunity in the NFL, and I expect him to take advantage. Godwin should be in line for around nine targets this week, and his ability to win 50/50 balls should make him a favorite of Ryan Fitzpatrick. Play Godwin in your DFS lineups this week and watch as he blows away expectations.