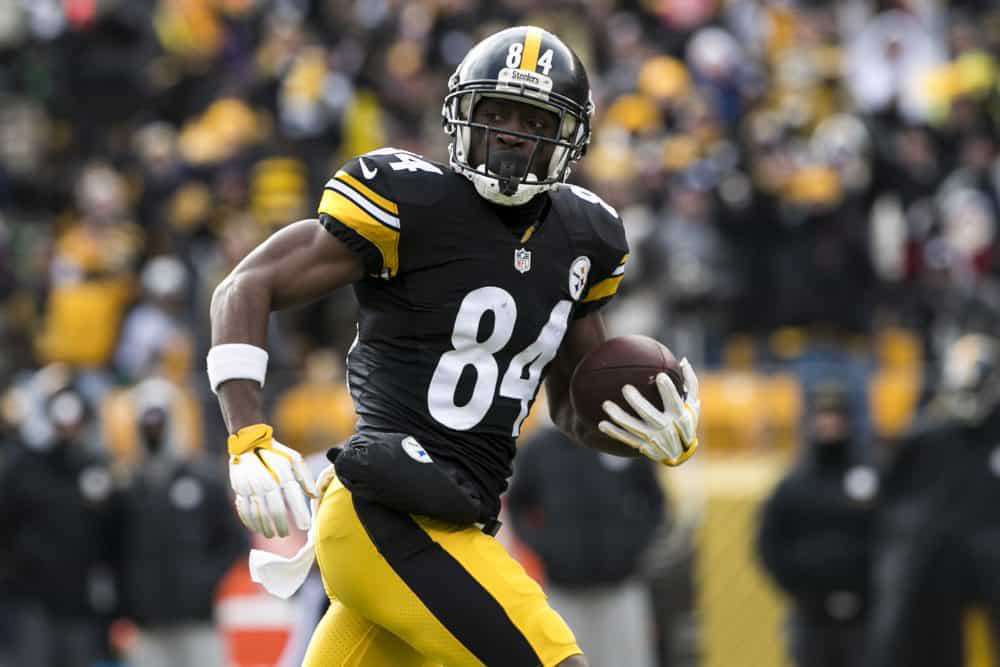 And just like that, everything is wrapped up in a neat little package. Rankings make fantasy life easy, and since it’s Week 1, this might be the final time I get to look like a genius for a while. The rankings below are based intended for PPR leagues and are influenced by last season stats and, of course, favorable Week 1 matchups. Hopefully, they don’t make you want to throw your computer out the window.

Agree or disagree with Ryan’s rankings? Let him know on Twitter! @RyanCook13

The Colts finally came clean on Monday. Andrew Luck will miss Week 1, and we still have no clear timetable as to when he’ll return. While we’re here, let’s also talk Carson Palmer. If you’re a Luck owner, he’s your go-to pairing option while you await Luck’s return. The Cardinals’ opening schedule looks like this: @DET, @IND, vs. DAL, vs. SF, @PHI, vs. TB, @LAR. Go ahead, point at the super tough defenses among that list. That’s right, you can’t! It’s also interesting to see Marcus Mariota’s ADP drop to 77 over the last week. He could still be available after the 12th round in some leagues, and after the Titans’ o-line gave up the seventh fewest sacks last year, that’s money value.

Feels good to have Ezekiel Elliott back. The Giants defense ranked ninth in rushing touchdowns allowed last season, so smiles all around. The Kareem Hunt hype hasn’t fully reached fever-pitch, but his ADP sure has. It’s risen seven spots since Spencer Ware’s injury, and he’s even been drafted ahead of guys like Amari Cooper. Further down the list, Matt Forte also stands out. All it will take is for offensive coordinator John Morton to actually, y’know, use him wisely – even if it is just on third down this season. Finally, C.J. Anderson also cracks the Top 25. The Broncos are facing the Chargers, last year’s worst rushing defense.

Larry Fitzgerald is a surprise Top 10 play this week. He owns 439 career yards and five TDs against the Lions, so those numbers alone deserve some respect. I also felt criminal placing Golden Tate so low, especially since he’s one of just four players to post 90+ catches in each of the last four seasons (sleeper, anyone?). Reaching for Doug Baldwin in the second or third round is still a clever move if you’ve yet to draft. The same goes for Jamison Crowder, who, despite Terrelle Pryor’s presence in Washington, will still see plenty of the 200 targets that went walkabout following DeSean Jackson and Pierre Garcon’s departure.

There’s good reason to remain high on Evan Engram in his rookie season. He put up 75 yards during the preseason on just nine targets, and with Odell Beckham Jr. still remaining questionable for Week 1, he’ll likely see a fair share of the ball. Physically, Engram stacks up as a tight end that Eli will love. Coming in at 6-foot-3 and 236 pounds, this is a big body you can’t miss. And since he projects to move around in the formation, he’ll likely spend more time as a receiver than a blocker this season. If you can play the matchups right, you’d do well to draft Engram late.

The Jaguars offer negative Nelly’s as far as fantasy goes this season, but the defense could really be the saving grace. There are major names at every position, as Paul Posluszny mans the linebackers, Jalen Ramsey leads the secondary, and that’s of course not even mentioning the signings of Calais Campbell and A.J. Bouye. The Jaguars put up 32 sacks last year and seven interceptions, and while people still sleep on this defense, make sure you consider them in your late rounds.