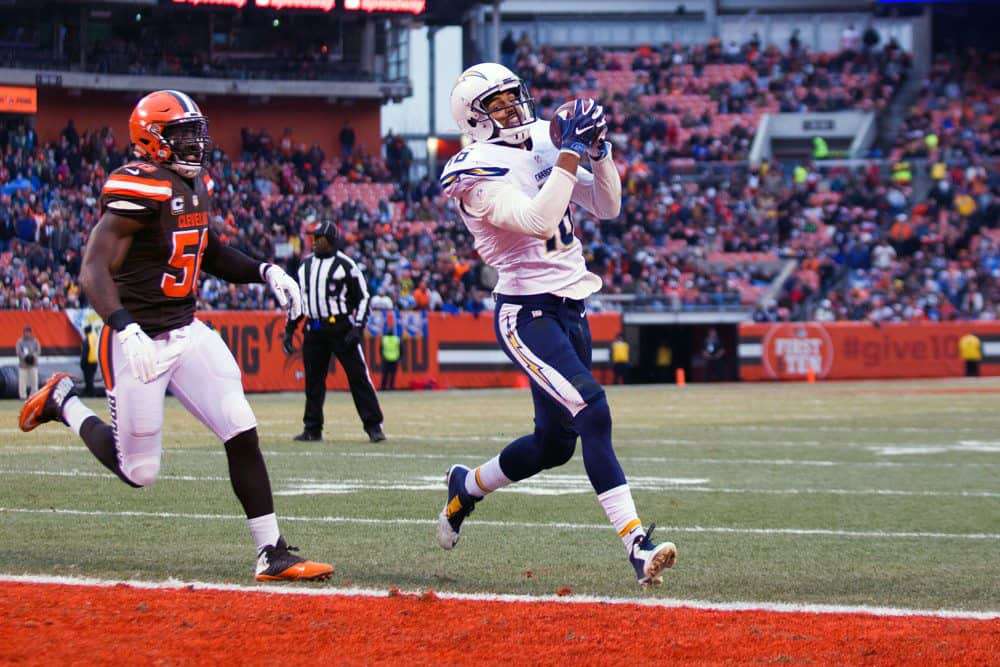 In a previous column highlighting wide receivers whom I consider to be overvalued based on their current Average Draft Position (ADP), I mentioned that only 11 wide receivers averaged at least 10 fantasy points per game last season. However, not all hope is lost. While there may be a relative lack of elite options, there are plenty of productive ones. A total of 35 wide receivers averaged at least eight points per contest last season, with another 13 averaging at least seven fantasy points per game. This is important because if you are playing in a Fantrax Classic Draft standard league, you are starting three wide receivers plus a Flex each week. Picking up those sneaky value plays in the middle rounds will solidify your weekly lineups and give you an edge over someone playing a backup running back or similar dart throw Flex play.

When seeking out these value plays, I tried to find wide receivers who fell below each of the “overvalued” wide receivers I highlighted last week in terms of ADP. This doesn’t mean I’d take any of these players over Amari Cooper. However, the following wide receivers will be starter-worthy much more often than most people seem to think. If you did read my previous column, you already know that I would draft Michael Crabtree ahead of Amari Cooper. While I do consider Crabtree extremely undervalued, I won’t repeat myself again here. You can consider Crabtree a freebie. Here are some of my favorite undervalued wide receivers heading into 2017:

ADPs are from Fantrax’s ADP data.

Emmanuel Sanders (ADP: 33rd among WRs)
Emmanuel Sanders was drafted as the 33rd wide receiver in standard fantasy leagues last season. His decline in ADP compared to the previous two seasons was likely due to concerns about the Denver Broncos’ quarterback situation following the retirement of Peyton Manning. While Trevor Siemian and Paxton Lynch understandably struggled at times, the adverse impact on Sanders was minimal. Sanders still finished 22nd in total fantasy points among wide receivers and 18th in per game scoring. If that’s considered a “down” season for a seventh round fantasy pick, sign me up. As we prepare for 2017, Sanders’ ADP is similar to last season. I think Sanders has a pretty safe floor in the low-WR2/high-WR3 range, which would already exceed his current ADP. If anything, Sanders’ numbers are likely to improve now that he has had a full season to fine-tune his chemistry with both Siemian and Lynch. Also, early reports out of camp had Denver “throwing the ball around” under offensive coordinator Mike McCoy, who has returned to Denver following four seasons as the Chargers’ head coach. McCoy’s offenses have finished in the top half of the NFL in both passing yards and passing touchdowns in seven of his eight seasons at the helm. The lone exception was the Tim Tebow-led 2011 Broncos. I can’t really pin that one on McCoy. Sanders should thrive regardless of who Denver names as its starting quarterback this season. I believe Sanders will remain a fantasy WR2 in 2017.

Pierre Garcon (ADP: 36th among WRs)
Pierre Garcon finished as the overall WR32 in his final season in Washington in 2016. He left for greener (primarily in terms of money) pastures as he heads to San Francisco to reunite with Kyle Shanahan. Shanahan is widely known for featuring his X receivers. Here are the numbers on some of the notable X receivers in Shanahan’s scheme over the years:

The #1 targeted wide receiver under Kyle Shanahan. Chance for Pierre Garcon to have a big year in San Francisco with no real threat to #1 WR pic.twitter.com/DgxcsgG6Kv

It’s probably unfair to compare Garcon to Andre Johnson or Julio Jones. But it’s also probably unfair to compare him to Josh Morgan, Jabar Gaffney, and Andrew Hawkins. Perhaps it’s best to compare Garcon with himself since he is on this list as well. When Shanahan was Washington’s offensive coordinator, Garcon averaged over six receptions and 76 yards per game over the course of their 26 games together. Given Shanahan’s penchant for throwing the football (top-10 in passing attempts in six of nine years as an offensive coordinator), this seems like a reasonable projection for Garcon. The 49ers are also likely to be facing negative game script quite a bit, which could render these numbers even a bit conservative. There’s also very little competition for targets in San Francisco. Garcon is a sneaky pick to lead the league in receptions this season. As such, he’s even more of a bargain in PPR leagues. Even in standard leagues, Garcon should settle in as a high-volume fantasy starter.

[the_ad id=”384″]Tyrell Williams (ADP: 37th among WRs)
At first glance, Tyrell Williams’ ADP seems odd considering that he finished as the overall WR14 last season. The skepticism among the fantasy community could be attributed to the fact that Williams did all of his 2016 damage (except for one catch) after target-magnet Keenan Allen suffered a season-ending knee injury during the first half of Week 1. The Chargers also drafted Mike Williams in the first round of the 2017 NFL Draft to bolster their receiving corps, which already included Dontrelle Inman and Travis Benjamin. However, the latter Williams suffered a back injury in rookie camp and could begin the season on the Physically Unable to Perform (PUP) list. Tyrell Williams’ ADP is on the rise, but I still consider him a bargain. Needless to say, this would benefit Tyrell Williams tremendously. With his rare combination of size and speed, Tyrell Williams is a prototypical X receiver and is in line for another big season in San Diego. Though Allen returns, he does a lot of his damage underneath and in the slot. I don’t think his return affects Tyrell Williams all that much. Even with Allen in the fold, I view Tyrell Williams as a fantasy WR3 with the potential for more if Mike Williams has trouble getting back on the field.

Cameron Meredith (ADP: 40th among WRs)
Fantrax’s own James Haehnel featured Cameron Meredith in his Monday Morning Sleeper column earlier this preseason, and I agree with his sentiments. After seeing spot duty in 2015 and the beginning of 2016, Meredith burst onto the scene as the year progressed, totaling 836 receiving yards over the final 12 games of 2016. This mark was eclipsed by only 12 other wide receivers during this stretch. Meredith finished particularly strong, averaging seven receptions, 93 yards, and 0.5 touchdowns over his final four games. The loss of Alshon Jeffery in free agency means Meredith is the new No. 1 receiver in Chicago. There’s a misconception among many fantasy owners that Meredith emerged when Jeffery missed time due to injury. That is simply not the case. All four of Meredith’s 100-yard receiving games occurred with Jeffery in the lineup last season. In fact, in the eight games that both Meredith and Jeffery played at least 75% of the snaps together, Meredith tallied 629 receiving yards and scored three touchdowns. Keeping that pace over a full season would put Meredith squarely in the low-WR1/high-WR2 discussion. Even if he falls short of that pace, he should easily outpace his current ADP. I envision Meredith as a WR3 with legitimate WR2 upside.

Kenny Britt (ADP: 43rd among WRs)
Kenny Britt will replace Terrelle Pryor as the Cleveland Browns’ new No. 1 wide receiver in 2017. Britt is currently going as the 43rd wide receiver off the board in fantasy drafts. Last season, Britt had more receiving yards than Davante Adams and averaged more receiving yards per game than Dez Bryant. He also scored more total fantasy points than DeAndre Hopkins and averaged more fantasy points per game than the aforementioned Pryor. In other words, Britt compares quite favorably to several consensus top-20 wide receivers. Yet Britt checks in at number 43. The knocks on Britt seem to center around the fact that he won’t be catching passes from upper-echelon quarterbacks in 2017. However, that didn’t derail him in 2016. In addition, it’s almost impossible for Cody Kessler and/or DeShone Kizer to be as bad as Case Keenum and Jared Goff were. The Browns’ only other known commodity at wide receiver is second-year player Corey Coleman. There has been no evidence that Coleman is any good at this point in his career. Coleman turned 60 second-half targets into a whopping 240 yards and one touchdown. I wouldn’t exactly worry about him affecting Britt too much. Besides, the Browns are missing the third most targets from a season ago and figure to be in negative game scripts quite a bit. As such, Britt’s volume is essentially guaranteed. Britt finished as the overall WR27 (WR21 on a per game basis) last season, and I expect similar returns in 2017 as well.