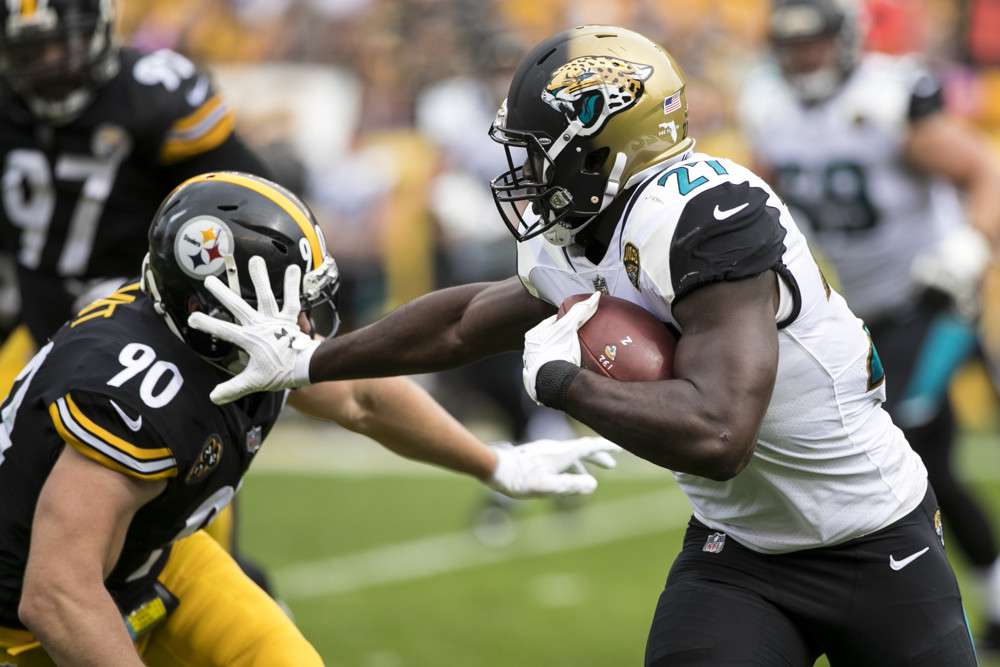 It’s hard to believe that we’re already halfway through the NFL season. With the calendar turning to November in a few days, that likely means that the trade deadline in your fantasy league is around the corner. What better way to get ready for the trade deadline than with some updated rest-of-season rankings? That was a trick question; there is no better way.

All right, you didn’t open this article to hear me talk. You came for the rankings. So, without further ado, my fantasy football positional rankings for the rest of the season.

Man, this has been a crazy week. Deshaun Watson was No. 2 in the below rankings, but he tore his ACL in practice and will miss the remainder of the season. This is a major blow, as Watson had been the top-scoring fantasy QB through the season’s first eight weeks. Unfortunately, we take him out and insert his replacement, Tom Savage, at No. 29 in the rankings.

One of the best factoids of the football season thus far has to be that Josh McCown has averaged more fantasy points per game than Matt Ryan. Crazy, right? Well, it’s true. On average, Matty Ice is only the 20th best fantasy QB through Week 7. A lot seems to be on the play-calling of new offensive coordinator, Steve Sarkisian, but it’s not all on him. The Falcons always seem to improve as the season progresses, so keep running Ryan out there as a QB1 for the time being.

An 11th-hour addition to these rankings is Jimmy Garoppolo. The San Francisco 49ers traded a 2018 2nd round pick to the New England Patriots for Garoppolo, who should soon take over as the starting QB in the bay area.

On the Rise: Alex Smith, Kansas City Chiefs – This might not be the sexiest pick, but you can’t argue with results. Smith finally has some decent weapons to work with, and it’s definitely showing in his stat line. Through seven games, Smith has thrown for 2,181 yards with 16 touchdowns and no interceptions. On top of that, he’s also rushed for 154 yards and another score on the ground. Not too shabby, Mr. Smith. It’s time to trust him as a legit QB1 based on his defensive matchup.

Free Falling: Matt Ryan, Atlanta Falcons – Not much more to say here after writing the above paragraph on Ryan. He still needs to be started (unless you have a better option), but his hold as a surefire QB1 is slipping.

The never-ending drama between Ezekiel Elliott and the NFL took another turn Monday night, as a U.S. district court judge denied the request for a preliminary injunction made by the NFL Player’s Association on Elliott’s behalf. This means that, once again, Elliott is suspended. Will this ever end? Knowing how the NFL operates, probably not, as Elliott is expected to appeal once again. But for now, Elliott is suspended for the next six games, and this Dallas backfield will consist of Alfred Morris and Darren McFadden. The value of both men remains limited until one distances himself from the other. Elliott remains barely in the rankings due to the uncertainty of his situation. If he ends up not having to serve the suspension, he would rank 2nd, barely behind Fournette.

Update: Elliott is now going to play Sunday. A temporary brief administration stay allows Elliott to play Sunday, but his status for Week 10 and beyond is still in doubt. As long as Elliott plays, he’s my second-ranked back for the rest of the season.

You could honestly rank these top four in any order and get no arguments from me. These four stud backs have been the best at their position so far, and don’t expect that to change for the rest of the season. After a dominating start to the season, Kareem Hunt has slowed a bit over the past few games. However, this is still a run-first offense that loves to utilize their backs, so Hunt should continue to be an elite RB1 the rest of the way.

As far as the top spot goes, I give the nod to rookie phenom Leonard Fournette. The Jaguars seem content pounding the ball with him 20+ times per game, and who can blame them? Don’t forget who their starting QB is. Fournette suffered an ankle injury in Week 6, which caused him to miss Week 7, but he is expected to be at full strength after the Jaguars’ Week 8 bye.

The Miami Dolphins sent Jay Ajayi to the Philadelphia Eagles for a fourth-round pick. This change doesn’t affect Ajayi’s spot in the rankings too much overall, though. The Eagles have a better offensive line, but LeGarrette Blount and Wendall Smallwood will still eat into Ajayi’s touches. This does, however, severely limit the value of Blount and Smallwood, making them droppable in standard leagues. The Dolphins are expected to go with an RBBC, with Kenyan Drake and Damien Williams splitting work, so no current Miami back is a recommended add until we have more clarity.

Aaron Jones, Green Bay Packers – It’s been quite a while since Green Bay had a legit featured back, but it sure looks like they have one now. In four games, Jones has run wild for 5.6 YPC, 86.5 YPG, and three touchdowns. What was once a timeshare with Ty Montgomery is now Jones’ job outright. Expect the Packers to rely heavily on the run game with Rodgers out, making Jones a solid RB2 the rest of the way and a borderline top-10 option in these rankings.

Alex Collins, Baltimore Ravens – This is still somewhat of a split backfield, but Collins has vastly outperformed Buck Allen and should get more touches going forward. He’s the far superior inside runner and should be owned in all leagues. Value him as an RB3 with RB2 upside moving forward.

Ty Montgomery, Green Bay Packers – Montgomery’s placement here is due to the emergence of the man listed in the section above. He’s still going to be a factor in the offense, but Jones’ presence limits Montgomery to nothing more than an RB4/Flex option for the rest of the season.

Jay Ajayi, Philadelphia Eagles – Well, at least he’s not on the dumpster fire that is the Miami Dolphins anymore. For a guy drafted within the first 15 picks or so on draft day, this has been just about as bad as it gets without suffering an injury. Every statistic you look at makes Ajayi’s season look worse, too. He’s averaging only 3.4 YPC and has yet to find the end zone through seven games. No one likes to hear the word “bust” with a top-15 pick, but that’s exactly what we have here. Talent keeps Ajayi on the RB2 radar, but even that is slipping. Ajayi is nothing more than a back-end RB2 until he shows some signs of life.

Injuries are everything in this game. In just one game, the Giants lost basically their entire receiving core to injuries. Unfortunately, that included Odell Beckham Jr. for the rest of the season. Now all Eli Manning has to throw to is Sterling Shepard and a band of misfits. Injuries at the quarterback position can also send ripples through the fantasy wide receiver landscape. Players like Jordy Nelson and Davante Adams look a lot less attractive with Brett Hundley manning the ship. The same can be said out in Arizona for the likes of Larry Fitzgerald and company. Drew Stanton isn’t going to light the world on fire anytime soon. All of these injuries have shaken up the WR rankings a bit, but the elite remain.

Rising: Nelson Agholor, Philadelphia Eagles – This Eagles offense is rolling, and Agholor has been a big reason why. The third-year receiver is finally living up to expectations and has become one of Carson Wentz’s favorite targets. While the results have been good so far, the schedule going forward isn’t doing him any favors. Regardless, with Wentz playing this well, Agholor should remain at least a WR3/4 for the rest of the season.

Free Falling: T.Y. Hilton, Indianapolis Colts – Jacoby Brissett hasn’t been a dumpster fire, but he’s certainly a far cry from Andrew Luck. Hilton remains in the top-30 of these rankings on the hopes that Luck returns within the next few weeks. His owners better hope that happens because Hilton is barely even a WR3 without Luck throwing the ball to him.

The tight end position in fantasy football is very similar to catchers in fantasy baseball. You have your elite few at the top of the rankings followed by a slew of crap after that. This year, that elite group is only the trio of Rob Gronkowski, Travis Kelce, and Zach Ertz. The names following them have been a mix and match of roughly a dozen other tight ends. We finally have a few others like Hunter Henry and Cameron Brate emerging as solid options. However, their track records are short. And, as always, Jason Witten keeps plugging along and is likely to finish as a TE1 again this season.

Rising: Cameron Brate, Tampa Bay Buccaneers – Coming into the season, Brate was on the fantasy radar, but it’s safe to say a top-five season wasn’t predicted. Brate currently ranks 4th amongst tight ends in receiving yards, tied for 3rd in touchdowns, and has scored the 4th most fantasy points. With all the ineptitude at the position, Brate should remain a strong TE1 play week in and week out.

Free Falling: Martellus Bennett, Green Bay Packers – Like I mentioned above in the wide receiver section, the Aaron Rodgers injury sent ripples through the fantasy landscape. Without a doubt, those ripples hit Bennett’s value hard. Already having s subpar season, Bennett is now firmly off the TE1 map with Hundley under center.

I hope you can use this article to your advantage and get a leg up on your fellow league members.  Got a question about a player not covered here? Ask in the comments below or follow me on Twitter @EricCross04 and ask there.