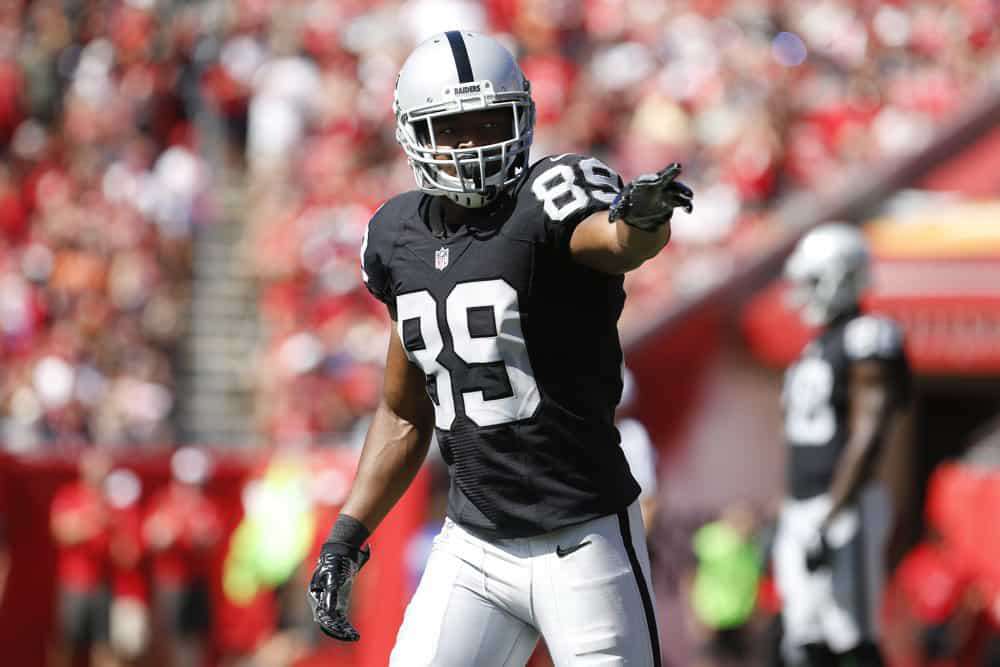 With NFL passing numbers at an all-time high, more and more wide receivers are putting up quality fantasy numbers. Unfortunately, that does not mean that drafting wide receivers doesn’t come with a fair amount of risk. It is believed that drafting running backs early is a major potential pitfall for fantasy owners due to injury and productivity concerns. Tell that to anyone who drafted A.J. Green, DeAndre Hopkins, or Allen Robinson in the first round of fantasy drafts last year. Or anyone who drafted Brandon Marshall, Keenan Allen, or perhaps even Alshon Jeffrey in the second.

When it comes to wide receivers, more so than any other position in fantasy football, you need to pay attention to your league format and scoring system. It is extremely important and will dramatically alter the way you must draft. Consider the following: In standard leagues last season, there were 25 running backs who averaged 10 fantasy points per game. That number rose slightly to 33 in Point Per Reception (PPR) leagues. In contrast, there were 11 wide receivers who averaged at least 10 fantasy points per game in standard leagues. However, in PPR leagues, that number skyrocketed to 56! If you are playing in a standard league, there are actually very few elite options. The last thing you can afford to do is draft someone expecting monster production when they will only produce middle-of-the-road results. Since we are dealing with standard scoring leagues, let’s take a look at some wide receivers whose draft price may be too steep for their production:

Hi. My name is Mick, and I am a Raider Hater. I promise that’s not really the case, though I can understand why one might think otherwise. After all, Cooper now joins teammates Derek Carr and Marshawn Lynch as Raiders whom I feel are being overvalued this season. Over the second half of the season, Amari Cooper totaled just 31 catches for 366 yards and three touchdowns. For me, that is simply not WR1 production. In fact, I’m not convinced he is even the best receiver on his own team. Michael Crabtree has seen more targets and has scored more fantasy points than Cooper in each of their two seasons together. Another factor to consider is the fact that Cooper has not yet proven that he can produce in scoring territory. Here are the red zone statistics for the top three Raiders wide receivers since 2015:

Now this isn’t to suggest I’d rather have Seth Roberts over Amari Cooper. But I would much rather prefer to pick Michael Crabtree in the fifth round than Amari Cooper in the second. In fact, I’d probably prefer Crabtree straight up over Cooper as a fantasy wide receiver.

[the_ad id=”384″]After a top-six finish in 2015, DeAndre Hopkins finished just behind A.J. Green in total points, which normally would signify a very good year. Except that Green tore his hamstring one minute into his tenth game last season. Yes, Green essentially scored more fantasy points in nine games than Hopkins did in 16, as Hopkins fell all the way down to the overall WR36 in 2016. The majority of the fantasy community believes Hopkins is in line to return to WR1 status and places the blame for Hopkins’ poor showing last season at the feet of Brock Osweiler. While Osweiler surely proved ineffectual, we can’t say with any certainty that Tom Savage and Deshaun Watson are significant upgrades. Neither has ever thrown an NFL touchdown pass. Houston is a team that doesn’t figure to air it out very often, choosing to rely on their outstanding defense to win games. I think it’s best to split the difference between Hopkins’ last two seasons and treat him as a mid-tier WR2 in fantasy until either Savage or Watson can prove they can help elevate Hopkins rather than hinder him.

Sammy Watkins is an electrifying talent who has the ability to score every time he touches the ball. Except that he never touches the ball. OK, not never. But over the past two seasons, Watkins has totaled 145 targets and 88 receptions over 20 games. For reference, Michael Crabtree had 145 targets and 89 receptions last season alone. (Did I mention you can get Crabtree in the fifth round?) Watkins’ career 16.1 yards per catch makes him more viable in standard leagues than PPR leagues. But Buffalo simply does not involve Watkins enough. Last season he played 382 snaps and touched the ball 28 times. In contrast, Tyreek Hill played 418 snaps for Kansas City and touched the ball 85 times. While Hill is falsely thought of by some as a gadget player, he actually had more receptions (61) than Watkins had targets (52). Even in standard leagues, Watkins’ lack of volume makes him a risky WR2. And that speaks nothing of the constant question marks surrounding his health and his future with the team. The Bills declined Watkins’ fifth-year tender, which speaks volumes about their faith in Watkins to remain healthy and productive throughout 2017. There are way too many red flags to take Sammy Watkins in the third round of your draft.

Julian Edelman is being drafted as the overall WR26 in both standard and PPR leagues. While Edelman’s ADP might be justified in a PPR league, it’s simply too high in a standard league. Despite his high volume (third in the NFL in total targets in 2016), Edelman had only three games with double-digit fantasy points last season. He was also significantly less effective with Rob Gronkowski on the field in 2016. In the eight games Gronkowski played last season, Edelman averaged just 49.8 receiving yards and scored one total touchdown. That receiving average drops even further to 46.2 in the six games where Gronkowski played even a quarter of New England’s offensive snaps. Though Gronkowski’s health is never guaranteed, New England also traded for Brandin Cooks during the offseason. Cooks totaled 2,311 receiving yards and 17 touchdowns over the past two seasons. His addition gives Tom Brady another elite receiving threat who will likely take some targets away from Edelman in 2017 as well. Edelman makes for a solid Flex/matchup play, but his ceiling is extremely limited in standard leagues.

Last season, Donte Moncrief scored seven touchdowns in just nine games. His touchdown to target rate was the highest in the NFL among wide receivers with at least 50 targets last season. However, as our friend TJ Hernandez from 4for4.com notes in this excellent column, touchdown rate and total touchdowns are among the least correlative stats from year to year for wide receivers. Targets, on the other hand, display the most year-to-year correlation. Moncrief has averaged only 6.4 targets over the past two seasons, and his 6.2 targets in 2016 were good for just 51st among wide receivers with at least 50 targets. Even with his likely unsustainable touchdown rate last season, Moncrief averaged 8.1 fantasy points per game, ranking 34th, behind Kenny Britt among others. Britt is currently going just outside the top-50 in ADP among wide receivers, while Moncrief is being regarded as an every-week starter. Moncrief will have usable weeks as a part of the Indianapolis Colts’ high-powered offense, but he’s best served as a Flex/matchup play or as a bye week fill-in.