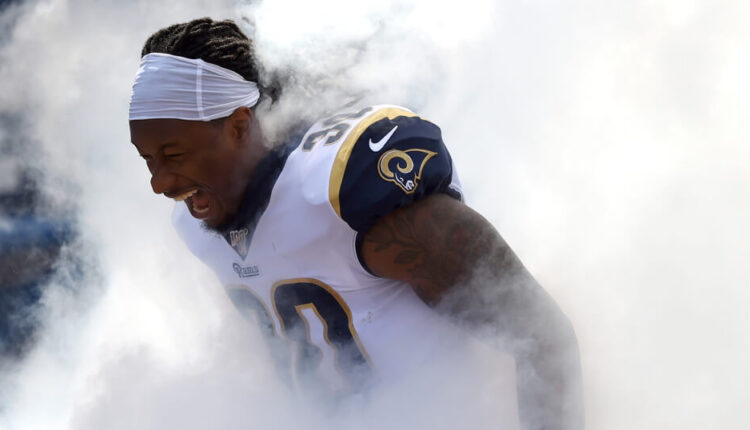 There has been no shortage of moves in the NFL. That means that the fantasy football landscape has been changing. And just as important as knowing where a player has signed, is knowing what it means for that player and the teams involved in fantasy football. I have got you covered there! I wrote about the many moves not once, but twice last week and then we were given plenty more moves over the weekend. The best part? There are still plenty of players that remain unsigned and will be finding a team. As always, I will have you covered with the fantasy impact of every move.

Todd Gurley Cut and Signs with the Falcons

Life comes at you fast. Todd Gurley went from the unquestioned best player in fantasy, a potential MVP candidate and playing in a Super Bowl, to being cut within a matter of a year or two. Luckily he did not remain unemployed for long, signing a one-year deal with the Atlanta Falcons.

Gurley saw substantial falloffs in 2019 across the board, but his lack of usage in the passing game is what buried his fantasy season. His 857 rushing yards was a career-low, but his 12 rushing TDs salvaged his value somewhat. In fact, he scored 38 percent of his 2019 fantasy points off of touchdowns, which was the highest of any starting running back. But he had just 49 targets in 2019, after having at least 59 receptions in the two prior seasons. He saw his catches cut nearly in half, while his receiving yards dropped by more than half. The big question here is, was his lack of usage due to a change in the Rams’ offense due to a struggling offensive line, or did Sean McVay see the lack of efficiency from Gurley and then change up the offense? It is vital because it could help us figure out if the Falcons plan to use Gurley heavily in the passing game as they previously did with Devonta Freeman.

Unfortunately, we likely will not be able to answer that question until we start to see games being played. For what it’s worth, Matt Ryan attempted 6.7 passes per game to RBs last season, while Goff had just 3.8. Over the past three seasons, Goff has averaged 5.3 passes per game to RBs compared to Ryan’s 6.1.

The floor for Gurley is a low-end RB2. That is exactly what Freeman finished as last season despite missing two games. Freeman finished as the RB20 in both total fantasy points and points per game, but his season was the exact opposite of Gurley. He rushed for just 656 yards and two scores but added 59 catches on 70 targets to go along with 410 rec yards and four scores. If Gurley was to see heavy usage in the passing game like this he can finish more like a high-end RB2, perhaps higher. But to me, the most realistic option here is that Gurley dominates carries, especially in the red zone, and splits passing game usage. He is currently my RB19, and while his exact ranking may change, I will continue to value him as a low-end RB2.

As for the Rams, this means as of now their top two backs are Malcolm Brown and Darrell Henderson. It is easy to forget but Henderson had plenty of hype last summer after McVay and the Rams traded up to select him in the third round of the 2019 NFL Draft. He hardly saw the field, but he remains the explosive prospect that many fell in love with last season. He will be the more hyped back of the two here and I believe he will settle in as a low-end RB2 in fantasy drafts. But I suspect he will be a value in early drafts and receive a bunch of helium in August and shoot up the board. Brown is the unexciting option here, but he will still be an option, especially in the red zone. I expect Brown will go around the seventh or eighth round of drafts, as an RB3 or flex option. The upside would be he wins the lead back job, making him worthy of a gamble. But, this could all change if the Rams draft another back in the 2020 NFL Draft, which sports a pretty deep RB class.

Who would you rather in #FantasyFootball?

Todd Gurley with the #Falcons or Melvin Gordon with the #Broncos?

Melvin Gordon to the Broncos

Gordon and the Broncos agreed on a two-year/$16-million-dollar contract with $13.5 guaranteed. Money like that shows that he is going to be the lead back on this team. But I am not so sure it means that he will not be part of a committee. The Broncos last year split work between Phillip Lindsay and Royce Freeman. Lindsay played 51 percent of the snaps to Freeman’s 49 percent. They also each saw 13 touches in the red zone. Lindsay saw 48 targets to Freeman’s 50.

Now, I do not think the Broncos paid Gordon to make him part of a three-way committee. I think Freeman is the odd man out. But I think there will be a timeshare between Gordon and Lindsay, just not as close as the one we saw last season. Last season Lindsay had 259 touches, while Freeman saw 175. This season I expect Gordon to be in the 250 range, while I would guess Lindsay is in the 150 range. Freeman will be sprinkled in as well.

Gordon’s efficiency took a hit last season, and many will point to the holdout as the reason for the drop-off. But, his efficiency last season was like every other season of his career except for 2018. Perhaps, 2018 is the anomaly. Since he will now be in a weaker offense, and still likely have to split work, he is an RB2 for me. But he does have the ceiling of an RB1. Lindsay is an RB3 or flex option, while Freeman is a late-round dart throw.

As for the Chargers, Austin Ekeler is the lead back there now. Last season he finished as the RB4, despite splitting work with Gordon from Week 5 on. In Weeks 1-4 we saw Ekeler average 14 carries per game and six catches. I think we can see a similar workload with him as the new lead back here. Justin Jackson will be used to spell Ekeler. In the first four games last season he averaged eight touches per game. But, the Chargers knew that ultimately Gordon would return last year, so there is a chance Jackson is used more. I think a split of the rushing work is possible, but Ekeler will dominate the passing game work. He put up great numbers for a WR last season, let alone a RB, and should now only be seeing more work. He is an RB1 and a first-round pick for me. Jackson is more of an RB4 or flex option, with upside.

Emmanuel Sanders to the Saints

Emmanuel Sanders signed a two-year/$17-million-dollar contract with the Saints. He will line up opposite of Michael Thomas and join him, Alvin Kamara and Jared Cook as the main weapons of Drew Brees. Sanders is the best WR2 on the Saints in years, but for fantasy I worry that the multiple other mouths to feed will lead to Sanders being inconsistent week-to-week. Getting to play half his game indoors on turf will help the veteran. To me, he is best served as a WR4.

Eric Ebron to the Steelers

When you look at Eric Ebron’s career, his 2018 season when he had a career-high 750 rec yards and 13 touchdowns, is clearly the anomaly. He had 13 touchdowns in that season and just 14 in his other five NFL seasons combined. Last season Ebron had to split tight end work with Jack Doyle. In that split, he finished with 52 targets, 31 catches, 375 rec yards and three scores. He finished as the TE27 last year. Now he heads to Pittsburgh who has their own version of Jack Doyle in Vance McDonald. Ebron is a TE2 for fantasy purposes.

P.J. Walker signed a two-year deal with the Carolina Panthers. For those of you asking, who? Walker was a standout in the XFL, leading the league in passing yards (1,338) and touchdowns (15), while also being able to use his legs when he has too. This is just a depth signing, as he likely serves as Teddy Bridgewater’s backup, but it is a cool story that I thought you should know!

Brian Hoyer signed a 1-year/$2-million dollar deal with the Patriots. He is purely veteran depth, but the current Patriots depth chart has him and Jarrett Stidham as the top QBs. Until they bring in someone else (Dalton, Cam, Winston, etc) this is a meaningful move.

The Raiders signed Nelson Agholor to a one-year deal. Agholor was part of one of the funniest moments of the 2019 NFL season, but the former first-round pick failed to live up to expectations in Philly. He did flash at times and should be utilized in three wide receiver sets. The only issue is he was far more productive when running out of the slot in Philly, and the Raiders have slot specialist Hunter Renfrow on the roster. Agholor will just be waiver wire fodder in 2020.

The Falcons signed Laquon Treadwell. The former first round pick is depth and is no guarantee to crack the final roster. The third wide receiver in Atlanta has fantasy value, but that spot is expected to be manned by Russell Gage. Do not read into this too much, just wanted it on your radar.