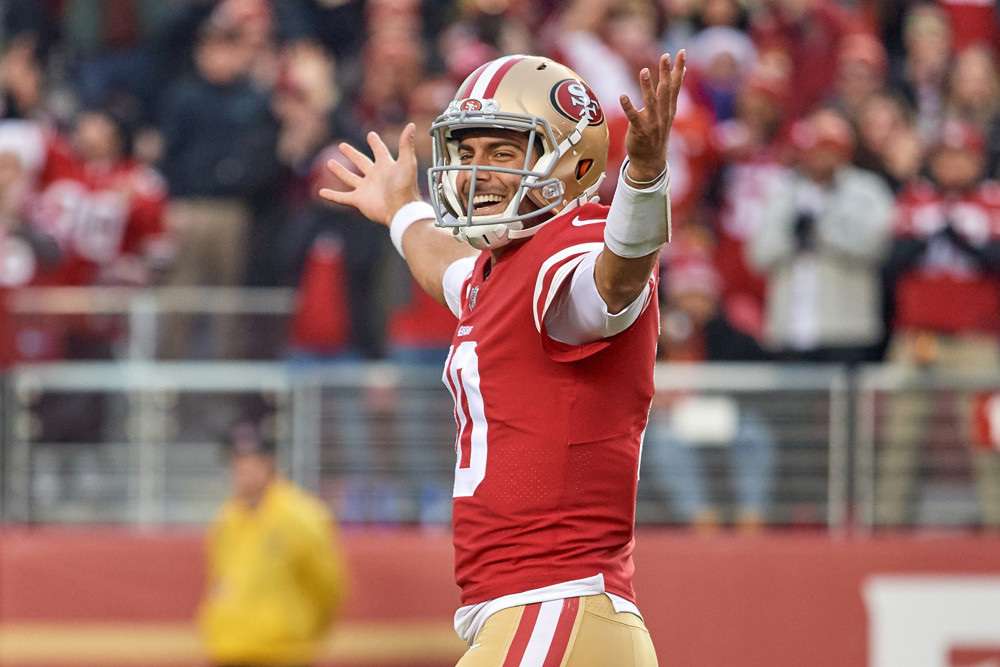 Nic Civale is a Doctor of Physical Therapy and former NCAA Division I athlete. This week’s injury report focuses on fantasy-relevant players who will affect roster decisions and add/drop scenarios for your team. With each weekly waiver period, Nic’s NFL injury report provides an opportunity to set yourself up for success down the road! Take advantage of the injury knowledge and analysis to better your team’s chances!

This article takes a more in-depth and long term look into some of the injuries that are affecting your fantasy teams. For more of a quick-hitting look at the actives and inactives for this week, check out Justin Johnson’s Week 3 Actives and Inactives.

Garoppolo is ruled out of Week 3 action with a high ankle sprain. High ankle sprains can vary greatly in their severity from person to person. But the 49ers have a vast depth of talent elsewhere on the field. Knowing the large sum of money they owe Garoppolo over the next few years, they will be likely to play it safe with him. Jimmy G should be considered questionable for at least the following two weeks. 49ers’ officials did not rule him out for week 3 until very recently – most likely to not give away their strategies for the week. Based on the severity and complexity of most high ankle sprains, I don’t think it was ever a question that Jimmy G would be held out this week.

Next week, we should know more about Jimmy Garoppolo‘s participation in practices. The most important thing to take notice of will be if he is participating in agility drills, as high ankle sprains significantly affect lateral movement. As a right-handed quarterback drop steps into the pocket, he must use the ankle to laterally provide force to accelerate and slow down according to what he surveys on the field. Without the mobility to move in the pocket, Garoppolo cannot extend plays with his athleticism and give his talented receivers more time to get open.

If you are storing Jimmy Garoppolo on your bench and shallow leagues, it is a good idea to hold onto him, as you likely/hopefully have a better starting option, and no teams are on bye weeks yet. If it is a deeper league where Garopollo is your number one, you likely also can’t afford to drop him at this point due to the limited amount of quarterback options. Either way he is worth saving on your bench unless you are decimated by injuries elsewhere. Although he hasn’t been an elite quarterback, Jimmy G has one of the best offensive minds in the game in Kyle Shanahan calling the shots, which is worth something. Remember that before reacting too quickly.

Lock has been ruled out for Week 3, and the Broncos young quarterback is listed to have a throwing shoulder injury. This was sustained against the Steelers’ hard-hitting defense in week two. Lock is likely not the first option for quarterback on your team unless you were banking on the 23-year-old’s upside this year, like GM, John Elway. But at this point, he is likely out for at least the next 1 to 3 games. The Broncos have not ruled him out for the entirety of three weeks yet so he will avoid of the injured reserve for now. Even after coming back from the injury, Lock should not be expected to throw upwards of 40 times a game. The Broncos depth at RB will likely allow them to lean heavily on the ground game even after Lock returns. GM John Elway has committed a significant amount of future stock towards the development of Drew lock and they will likely play it safe with their young quarterback, similarly to the Niners with Garoppolo

Mostert (MCL Sprain) and Coleman (knee sprain- unspecified) are both missing this upcoming week’s matchup, joining Garoppolo and Kittle on the bench. Mostert‘s knee injury is expected to be less serious than that of Tevin Coleman, who will miss 3-4 weeks. With Nate Mullens at quarterback, Kittle on the bench, and the plethora of running back depth dwindling down to just Jerrick McKinnon, it will be a tough road matchup this week for the 49ers, even against the struggling Giants. Both running backs are good options to keep on your bench if at all possible, as they both have solid upside in the running and passing game. Although it is, at times, a true committee for 49ers running back’s, any one of these RBs could blow up and win you the week. If a decision needs to be made on keeping one of the two, Raheem Mostert is the best bet for the near future.

Taylor gets my deepest sympathies this week, as he is out, “indefinitely” with a punctured lung. This comes after a team doctor gave him a pain-relieving injection after he sustained two cracked ribs vs. the Bengals in week 1. Taylor has been a true professional in the league, venturing from team to team in starting and in backup roles. Taylor is certainly a solid backup QB, especially in deeper leagues. Coach, Anthony Lynn, stated that if Tyrod is 100%, he is the LAC starter. It is very difficult to tell at this point if the timetable is weeks or months. But if your plan was drafting Tyrod as a QB2, there is no need to drop him yet, as the bye weeks have not begun and your QB1 should be available to go, unless they are Jimmy G or Lock.

Jeffery is not the high-profile name he once was, but Wentz and the Eagles would love to see him back ASAP. Now may be the time to act if looking for future WR depth on the waiver wire, as Jeffery has begun practicing for the first time in about 9.5 months. Jeffery is recovering from a Lisfranc injury or an ankle fracture that displaces some of the small bones that make up the joint. Philly hasn’t made it clear if Jeffery is aiming to start playing in week 4, but he is out for week 3. However, he would be a welcome addition to the receiver corps that features Dallas Goedert and DeSean Jackson as the first two options. Jeffery may provide your bench with an option for a mid-to-high floor WR4/5 for bye weeks and flex options going forward.

Both are out for week 3 vs Indianapolis, leaving Braxton Berrios as the likely #1 target for Sam Darnold. Crowder (hamstring) was out week 2 and is not necessarily a lock to come back for week 4 either. Perriman (ankle) is considered week to week with no guarantee of his own to return for week 4. The Jets are an offense to avoid in general, but if you need to run a few deep flyers out for the next few weeks, Chris Herndon, TE, and Braxton Berrios, WR, will likely take the majority of the targets from the two injured WRs.

McCaffrey is obviously the most relevant fantasy name in this article, but there is no debate on protocol here. If you need to burn a bench spot to keep him, you burn it. McCaffrey has hit the IR for about 4-6 weeks with a high ankle sprain. It is a really unfortunate position to be in, but it would be inconceivable to drop him and less-than-advisable to sell for cents on the dollar. Similarly, Michael Thomas and Davante Adams are “out” and “doubtful” for Week 3, respectively. But there are no decisions to be made here. They are undroppable and are not expected to miss too much more time, if any at all, going forward.

If you found Nik’s Week 3 NFL Injury Report helpful, you’ll definitely want to check out the rest of our Week 3 Fantasy Football lineup!