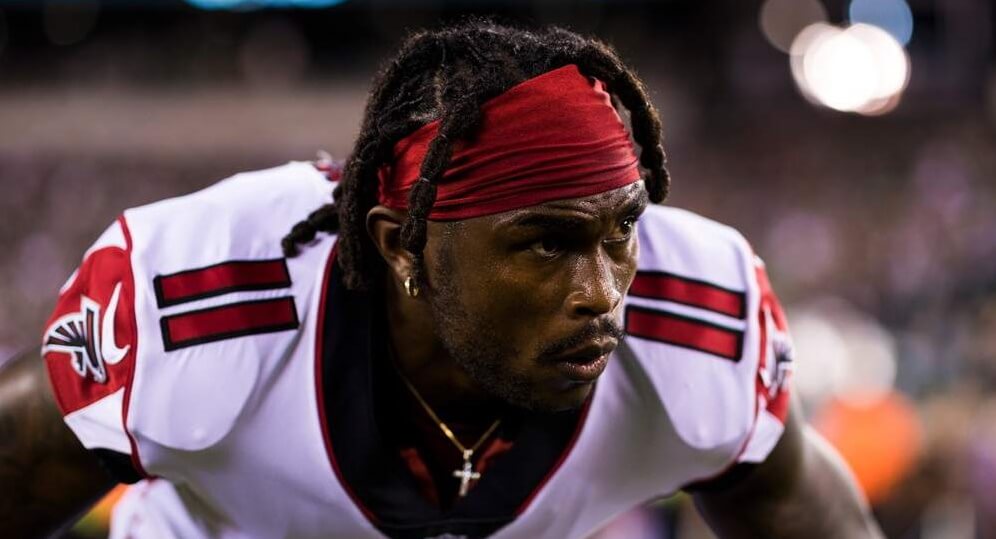 Nic Civale is a Doctor of Physical Therapy and former NCAA Division I athlete. This week’s injury report focuses on fantasy-relevant players who will affect game-time decisions for you and your team. The Week 2 Injury Report is not meant to be the final word on their status, so use the info to make some last-minute adds or plan your lineups accordingly.

Returned to practice Friday after being labeled a “Big question mark” on Thursday, but is still listed as doubtful for Sunday’s game. Plan as if he will not be available.

The often ‘questionable,’ but often amazing Julio Jones was limited in practice this week with hamstring issues, but he is a go for Sunday and should be started everywhere.

MT has surprised the Saints with his quick progress in rehabbing from a high ankle sprain, and there is actually a possibility he plays Monday. It is still worth noting he is unlikely to be in pads, but we’re saying there’s a chance! He was initially expected to miss several weeks, which should worry some owners based on the initial severity of the injury; high ankle sprains can be easily re-aggravated. But if he is a go on Monday, even at partial work-load it would be very hard to make an argument to sit him. This will have to be a game-time decision on SUNDAY, to allow for roster decisions to be made if he is indeed deemed OUT at game time.

Listed as OUT for Sunday’s matchup with Green Bay; look for Quintez Cephus and Marvin Jones to take the LION’S SHARE of targets in week 2.

Amari says all systems are go for Sunday’s game vs the Falcons’ unproven secondary. This is fantastic news for those rostering Cooper, who has high upside vs. Atlanta and is one of Prescott’s most trusted receivers.

What can Brown do for you? Nothing this week. He is out for Week 2 with ongoing issues surrounding a ‘knee bruise.’ Look to Corey Davis as a high upside option, as he was recently removed from this week’s injury report.

Sutton will be a game-time decision on Sunday (shoulder) for Vic Fangio and company. Fangio has been noted saying Sutton has looked good in practices, but Ian Rappaport has also called his a “longshot to play.” Sutton is dealing with an AC joint injury, which is normally exacerbated by reaching overhead. This can be problematic for a receiver, but apparently he has been looking good at practice and feeling better than last week. The match-up is vs. a hard-hitting Steelers defense, which is a bit frightening for someone who is usually known to fight for extra yardage. It’s worth wondering if the injury would temper Sutton’s aggressiveness during the game. If no major changes come out regarding Sutton’s status, I’d be hesitant to keep him in the lineup against Pittsburgh.

Parker has been limited all week in practice after a 2nd half hamstring injury against the Pats in Week 1, and remains questionable for this week’s matchup. He’s a risky play based on this information and on how fickle hamstrings can be. Start planning accordingly, as Parker may be sitting out or very limited vs. the Jags this week.

The speedster has been a non-participant in practices Thursday and Friday. This is not a good sign for his playing time this weekend. There haven’t been specific reports on Ruggs’ injury. From watching the tackle, Ruggs likely had a tremendous strain on his Achilles tendon, the anterior portion of his knee/quad tendon, and the muscles and tendons on the medial- or inside- of the foot. If the knee injury is related to the quadriceps, this will drastically limit his ability to stop and start (more specifically the stop), which could limit his effectiveness significantly. Even if Ruggs is played on Sunday, it’s worth noting he received exactly zero touches after the injury was sustained last week. I would be planning to find another option for your WR or FLEX slot for week 2.

Brown has returned to practice in full (foot) on Friday and should be a solid option as a WR2/3 as the Bills host the Rams, who make the difficult West Coast to East Coast trek.

As per usual, few updates have come out of Patriots camp regarding Harry’s shoulder. After playing last week, he remains questionable for this week’s matchup in Seattle. His status will need to be closely monitored as we approach Sunday.

Almost mirroring Harry, Edelman’s status is also questionable, despite playing in Week 1. Edelman may also be a game-time decision, but he is dealing with a knee injury that was ailing him since prior to Week 1.

Tate looks like he may be a go this week, as he has been participating in limited practice sessions for Thursday and Friday. He is not a high-upside play, but it is looking like he is a better than 50% chance to play.

Bell hit the IR with a hamstring injury and will remain there for 3 weeks. He is eligible to return as early as week 5. Keep him on your rosters, or consider reaching out for trades to managers who are off to a hot start and think they can trade away depth and manage the next 3 weeks with him on the IR.

Lindsay is out this week (turf toe), which opens the door for Gordon to really shine in his Denver debut (as a Bronco). Lindsay is one of my favorite backs, personally. The hope is he returns by next week.

JJ is doubtful for week 2 with a quad injury that has held him sidelined for the past few practices. He’s now likely the No. 3 option for the Chargers going forward, as Joshua Kelley has claimed No. 2. It’s probably okay to drop Jackson at this point.

Perine remains questionable but has been seen at practice in limited capacity. With Lev Bell out for a few weeks, he could be a desperation play if he gets cleared by game time on Sunday

Unfortunately, Mack has torn his Achilles and will be out for the rest of 2020.

Kittle is out for this week and it is possible the injury is serious enough to keep him out for Week 3. What a blow to those who drafted him. It will be tough to find a replacement with the thin TE market.

The Rams talented TE is questionable for Week 2 officially, but coach McVay stated he “fully expects” to play. Everett, himself, is not an ideal TE1 option. The most significant fantasy impact here is that Tyler Higbee will have some targets taken from him.

Doyle is out for week 2 and possibly longer. More info and more time will be needed to see how his ankle heals up before week 3.

If you liked Nic’s NFL Week 2 Injury Report, you’ll definitely want to check out the rest of our Week 2 content!