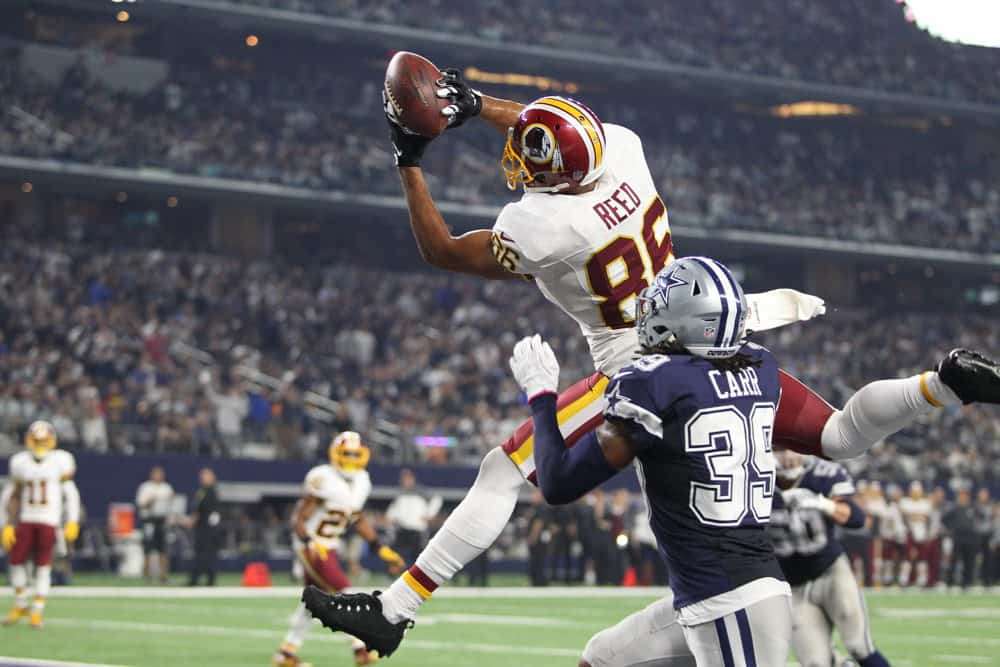 Last season, 26,593 yards and 181 touchdowns were recorded by tight ends. So trust someone who’s done the math: this position matters.

Drafting a tight end in any league format can be tricky. Once the top five guys are wiped off the board, it’s like splitting hairs, and if you aren’t prepared to play the waiting game, you may find yourself reaching.

As far as strategies go, I sometimes think reaching for a tight end isn’t altogether a bad move. The position itself has all of a sudden become invaluable and may hold more merit over the running back spot as far as reliability and points are concerned.

Tight end always seems like a pretty biased position to me. We all have our guys that we rely on every season, but since the top five on this list missed a combined 19 games last season, it’s important to do these rankings now, so we know exactly what we’re getting ourselves into for the rest of the year.

Tight end makes up the backbone of a strong fantasy team, and there’s plenty of value available in any round. Anyway, enough of what you already know, here are the rankings:
1. Travis Kelce, Kansas City Chiefs
I’d better have a damn good reason for ranking Kelce ahead of Gronk, right? Okay, here goes:

I’ll get it out of the way right now: Gronk’s durability concerns are the leading factor when it comes to ranking tight ends. Kelce, meanwhile, has become one of the Chiefs’ biggest leaders in real life and in fantasy, leading all tight ends with 138 points last season.

The Chiefs offense is minus Jeremy Maclin, which is a plus for Kelce. Kelce saw 117 targets last season as their leading receiver, and he should now become friendly with the ball even more.

What really stands out, though, is Kelce’s 357 yards on 1st and 10. His three TDs in the red zone is pretty okay, as well, and since he’s played in all 16 games during the last three years, do yourself a favor and draft the young, healthy, 27-year-old guy first. There’s no point living dangerously.

There are four pages of Google news relating to Rob Gronkowski. Guess what, none of them are about football.

Gronk is kinda like Steve, your high school friend who always said he was really good at football, except when it came time to play he suddenly had a mysterious knee injury. Only with Gronk, he really is good at football. At least when he actually, y’know, plays it, that is.

Look, we all know Gronk is a weapon. He drives defensive secondaries mental, but don’t expect more than 10-12 games this season. The Patriots have the fun job of deciding when and how often they play him this season, and the longer he continues to miss consistent time on the field, the further his value continues to slip.

Yep, you too could be the proud owner of a Jordan Reed if you draft smart this season.

Seriously, Reed could head this list next year. He’s one of the best tight ends in the league right now, and if he stays off the shelf and strings together 16 games for the first time in his career, there’s no telling where this thing might go.

That’s the key, though, actually playing. We’re talking hamstring, shoulder and most importantly, concussions here, and it remains to be seen if we receive the black and blue version of Reed, or the red zone threat that scored 11 TDs last season.

Reed has plenty of physical concerns, and he has missed some OTAs this offseason. On the plus side, he was training with Chad Johnson (Ochocinco? I don’t even know anymore) earlier in June, so only good things can come of that, right?

Age shall not weary Greg Olsen, nor the years condemn.

Get this, Olsen has played more snaps (4,948) than all other pass catchers in the NFL. The last time he missed a game was in 2011, and although he is 32 years old, there’s just so many reasons to man-crush all over him again.

Aside from the third consecutive 1,000+ yard season thing (he’s the only player in NFL history to accomplish that, by the way), Olsen is still a staple tight end. It’d be nice if he caught for more than three TDs this season, but you can easily pick up Olsen in the fifth-sixth rounds, and laugh while the numbers pile up yet again.

I normally let the stats do the talking, but with Walker, or any Titans player for that matter, I think Marcus Mariota and Tennessee’s offensive line says enough.

The Titans allowed the seventh fewest sacks last season, and while that doesn’t automatically translate to Walker individually, it means Mariota should once again have plenty of time to do his thang’ in the pocket this season.

Walker has racked up a minimum of 800 yards during his last three seasons. The one problem now presenting itself, though, is competition. The Titans drafted three receivers in April, and although Walker offers the best pass-catching ability among tight ends, he’ll still have to put up consistent numbers if he not only wants to hold onto his roster spot, but also his placement on this glorious list.
6. Tyler Eifert, Cincinnati Bengals

[the_ad id=”384″]I feel like this is now becoming an “injured players that could be good, but just don’t get your hopes up” kind of list.

Eifert was meant to be better than this. It’s been a career marred by injuries, and four consecutive seasons of watching Eifert sit out a gigantic handful of games.

If you draft Eifert, just remember this: draft another tight end. He’s probably not going to be dependable for the entire season, but due to pure athleticism and the fact that he’s averaging 10 fantasy points per game, that’s why he sits high and mighty here.

Yep, the back end of the tight end class is tight and sweaty. Graham is another riser that could leap frog his way up this list if he puts together another spectacular season, and honestly, you could do a lot worse as far as mid-round tight ends go.

Graham was quietly good in 2016, fresh off a scary knee injury that easily could have ruined everything. He finished with 923 yards and six TDs on just 95 targets and is basically a sure thing in any standard league.

Man, it’s been a long time since the Packers have had a really good tight end.

It’s scary to think what this might turn out to be. Really, that’s all up to Aaron Rodgers, and even though Bennett has been a “meh” fantasy football tight end for a while, throwing him into No. 12’s wolf pack leaves plenty of reason for optimism.

Rodgers targeted the tight end position 103 times last year, and it resulted in Jared Cook and Richard Rodgers combining for only 648 yards and three TDs. Bennett’s 6-foot-6, 275-pound frame has always made him a force, but now that Tom Brady and the Patriots are in the rear view mirror, he can enjoy the fruits that one of the NFL’s most explosive offenses has to offer.

I’m seeing a lot about Rudolph falling to the third and fourth rounds this season, but look, he’s really worth an earlier pick for a number of reasons.

There’s the obvious running back gone-a-missing factor in Minnesota right now, which should equal a lot more targets for Rudolph in the passing game — if that’s humanly possible. He saw 132 targets last season (the most among all tight ends) and also ranked behind only Kelce and Pitta in receptions (83).

The great thing that’s now well, a thing, with Rudolph is that he’s scoring touchdowns. He used to be the kind of tight end that would put up some big yards but fail to keep the scoreboard ticking. Now, he’s putting up 6’s, and most importantly, scoring fantasy points in more than one category.

We’re talking low-end guys now, so Ertz easily takes the cake in this department. Or wait a second, does he?

If Ertz can actually put up good numbers in the first half of the season, we’re still looking at a mid-round pick here. His entire season depends on kick-starting the blossoming friendship he found with Carson Wentz toward the second half of the season, and if there’s one thing to be encouraged by, it’s the 78 passes Wentz threw his way in the final eight games last year.

The Eagles tacked on Alshon Jeffery and Torrey Smith this offseason, so Ertz should have more time to find open space. His name also lends itself to witty fantasy team names, so that’s another advantage, I guess.