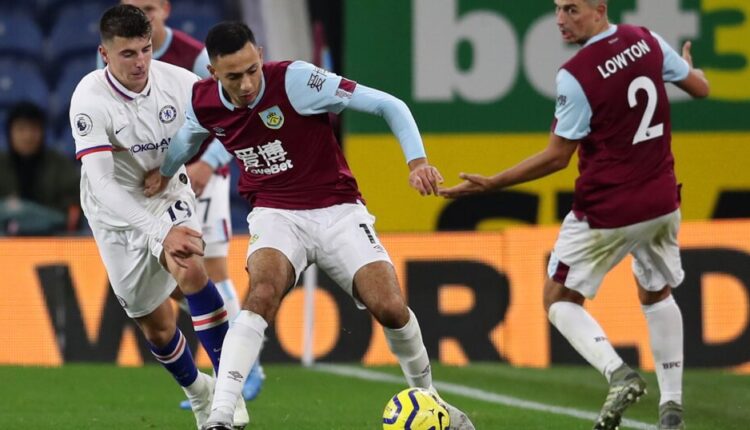 Fellow Fantrax writers The FFChaps have been singing the praises of Emiliano Buendia since Norwich secured promotion last season, and whilst he’s looked good from day one in the Premier League, he’s taken it to a new level in recent weeks. Scores of 21, 18, 29.5, 14.5, 19.5, and 32 from his last six matches are KDB-like numbers. Guess how many goals he’s scored in that time? Answer: zero. And he’s only assisted three times in that spell too. The Norwich midfielder has become the King of the Underlying Numbers, with 31 key passes in that six-game run – only 15 players have managed more ALL SEASON.

The underlying numbers include key passes, shots on target, successful dribbles, accurate crosses, aerials won, interceptions, clearances, and tackles. They can help identify players on the verge of breaking out, or others that are due a fall. A midfielder with a decent FP/G, but without a single assist or goal (Oliver Norwood finally scored! Is Fred the new man?) could be poised for big things if he catches a break or two. Likewise, a forward banging in the goals and with a nice, but not exactly spectacular, FP/G might find his fantasy value drop if the goals dry up (Danny Ings is exhibit A here). But before we look at these numbers and think about what they might mean for gameweeks 22, 23, and 24, let’s look how we fared with our suggestions last time out. 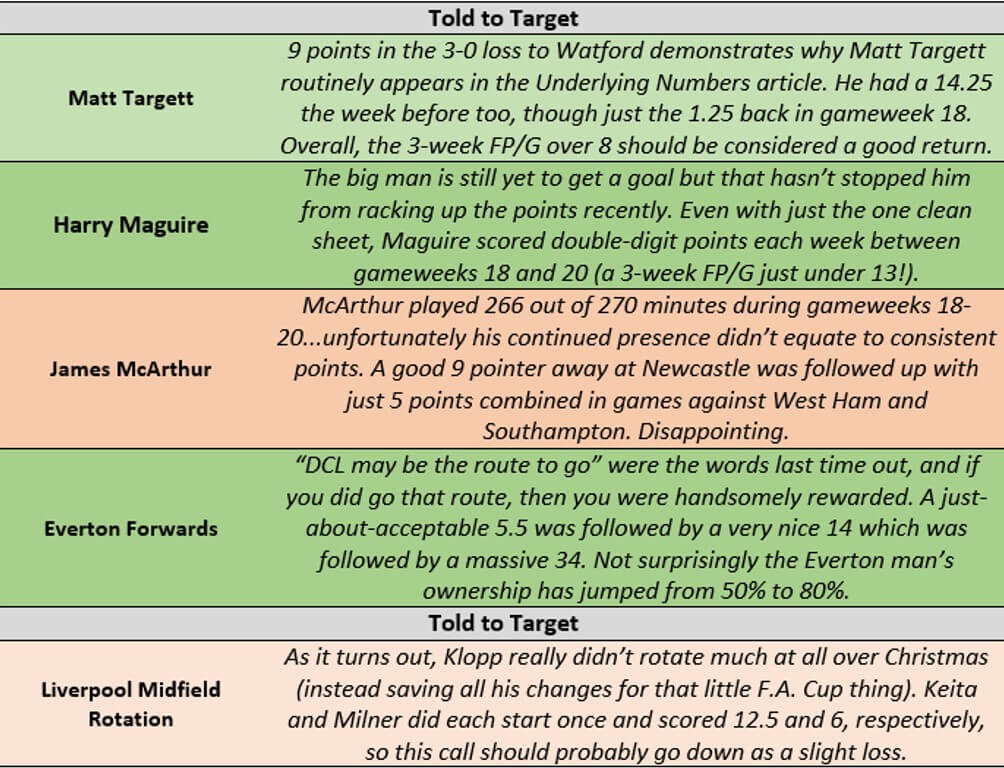 Pretty good return last time out, with Maguire and DCL really firing, and Targett doing a decent job too. Even the “misses” weren’t that bad – definitely not in the “Erik Pieters” territory of prediction (see Gameweek 15’s Underlying Numbers!). Let’s see if we can improve even further in January.

The tables below show the players who are most and least reliant on either clean sheets (defenders) or assists and goals (midfielders/forwards). Only players who have played at least 630 league minutes and have an FP/G of at least 5 are included. Thanks to Stefan for the idea of adding FP/G’s next to players too.

A defender with an 11.21 FP/G should probably be owned in all leagues, anyway. But when you add in the fact that the player has played at right midfield in 3 of his last 4 games and that Everton has a new (world-class!) manager, it’s very strange that Sidibe’s ownership is “just” 76%. The Frenchman has a clean sheet reliance of just 12.4%, so even if they don’t get one or more in their next few games, he should still produce the goods. That said, their upcoming schedule is Brighton (home), West Ham (away), and Newcastle (home)…surely there’s one clean sheet (and therefore a possible 20+ point haul?) incoming.

Bournemouth is on a horrible run right now…one that makes you wonder whether we could be calling time on their fairytale come May. I hate to sit on the fence, but it’s 50-50 for me right now. The next few games are obviously crucial, but even more so considering they have the easiest upcoming schedule in the league. If you back Howe and his boys to turn things around, then Philip Billing could be the go. The midfielder surely comes back into the team after his F.A. Cup performance (and after being dropped in Bournemouth’s embarrassing 4-0 loss to West Ham in Gameweek 21). I’ve recommended Billing before and he’s not kicked on, but I still believe that his current 6.4 FP/G is very much the floor for his fantasy value.

Billing’s old midfield partner from Huddersfield is the second man to target this week. Aaron Mooy has been a popular shout in the deeper dive articles for a couple of weeks now, but at 36% ownership, there’s still a decent chance he’s available in your league. There’s good reason for the hype too. His reliance on assists and goals is just 15.6% but with games against Everton, Villa, and Bournemouth coming up don’t be surprised to see him add one or two of those as a bonus anyway. In fact, Brighton played Bournemouth just a couple of weeks ago in Gameweek 20, with Mooy finding the back of the net – and 25.5 points – on the day.

Burnley has some horrible fixtures coming up in Chelsea, Leicester, and Manchester United. They’re also coming off three losses, which has seen them drop to 15th and may have some questioning their quality. Though this should scare you off from the likes of Mee, Wood, and Barnes (all moderate-to-high reliant players), it actually presents a good time to try and acquire Burnley’s second-best player (in terms of FP/G) in a cut-price trade. As the table above shows, McNeil is not reliant on goals or assists for his fantasy points, so whilst he may not hit double-digits during January, he should still do okay, and the trade should set you up nicely when Burnley’s schedule gets easier later on in the season.

If August and September were the months of Teemu Pukki, then November and December have belonged to Danny Ings. I think that’s where it ends though. Southampton is up against some good defenses over the next three weeks (Leicester, Wolves, and Crystal Palace), with only Wolves being at home. I see him blanking twice, and when he blanks, he’s not a good fantasy asset. In fact, without goals or assists, his FP/G drops to just 5.48. If you play in an 8 or 10 man league it would not be unreasonable to leave Ings on your bench at some point.

So that’s your lot for this week’s underlying numbers. See if you can grab a hold of Sidibe, Billing, Mooy, and McNeil, or make your own calls (and possible trade offers) based on looking at the two tables yourselves. Ings owners beware…Southampton’s schedule – and Ings’ reliance % – don’t bode well for the next few games. Trade now whilst high? Or ride it out with him on the bench? Or ignore this stupid article altogether? Let me know with a comment.

Remember, the green table – those who are not reliant on the big three stats – could be ideal “buy low” players, whilst the orange table – those who are reliant – could be your “sell high” players. Note, all fantasy points numbers are based on the Togga-scoring format, whilst % ownership was correct as of January 5th. Full data spreadsheets are available on request. Predominant sources used include www.premierleague.com, www.understat.com, www.sofascore.com, and www.whoscored.com.

There are many ways to run your team in Fantrax Fantasy EPL. Some are more cliched than others. Which of the 12 types of manager are you?