November 28, 2019 by The Fantasy Football Chaps Leave a Comment   |  TheFFChaps 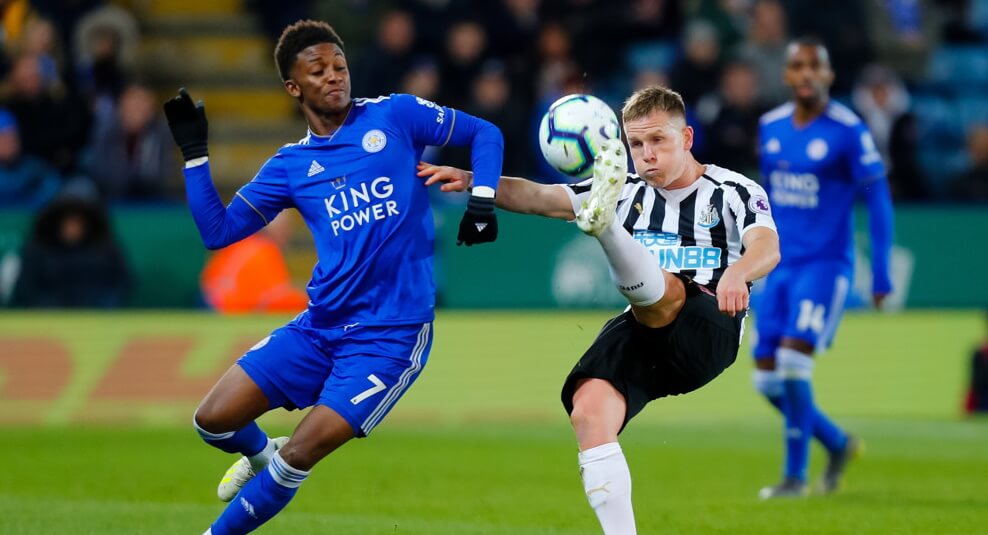 Our Gameweek 14 Chaps Choices article provides Fantrax managers with a Fantasy EPL Sleepers XI.  Our starting eleven of Premier League differential picks will help you find a golden ticket to a big score this weekend!  These hints and tips will give you a better chance of picking up an all-important victory, as one of our Fantasy EPL sleeper picks could easily make the difference in a Head-to-Head game!

Prospects:  In goal, we’re opting for Tottenham shot-stopper Gazzaniga.  Spurs have been pretty poor at the back this season, but we’re expecting things to get better under Mourinho!  Tottenham faces Bournemouth at home, and while a clean sheet is a possibility, Gazzaniga should also make a fair few saves and earn himself a decent score this weekend.  There isn’t too much to chose from for streaming goalkeepers this weekend, with perhaps Krul (28% ownership) an option as Norwich faces Arsenal at home.

Prospects:  After a few disappointing displays, Sean Dyche decided to switch things up with his full-backs, bringing Phil Bardsley and Charlie Taylor into the fold for Gameweek 12.  The Clarets won this game 3-0 and followed this up with another 3-0 victory in Gameweek 13.  Therefore, Bardsley, as well as Taylor, will continue in the side for the foreseeable future.  Bardsley has scored incredibly well during these two games, so he’s well worth bringing in to your Fantrax squad.  He was featured in our Waiver Wire Targets article earlier in the week too.  This weekend Burnley faces Crystal Palace in front of their own fans, and we fully expect another double-digit haul from Bardsley!

Alternative Choice:  The obvious alternative here is Charlie Taylor (8% ownership).  The young left-back has been scoring very well since his re-introduction to the team as well.  Getting on board with one of these two Burnley defenders is a key takeaway from these Gameweek 14 Sleepers recommendations!

Prospects:  A Southampton defender?  Yep.  Ryan Bertrand returned to the side in Gameweek 13, after missing the previous two games through suspension.  The English left-back gained an assist, as well as two key passes, en route to a score of 8.5 points.  Not too bad considering Southampton conceded two goals!  This weekend The Saints face struggling Watford at home, and we would recommend taking a look at Bertrand ahead of this fixture.  Southampton also has a pretty decent run of fixtures on the horizon!

Prospects:  Liverpool continue to concede goals, but we have to back one of their defenders for our Gameweek 14 Sleepers XI if they are below 60% ownership!!  Matip looks set to miss out again this weekend, so Lovren should feature again as Liverpool host Brighton.  Surely a clean sheet will be gained this weekend!!  Liverpool is on an absolute mission to win the Premier League this season, and we expect them to beat Brighton with ease.  If Lovren is free in your Fantrax Draft League, we would highly recommend signing him while Matip continues to sit on the sidelines.

Alternative Choice:  Another defender from a big club who has surprisingly low ownership, is Kurt Zouma (49% ownership).  The Frenchman has established himself in the side and is performing pretty consistently on Fantrax.  Chelsea faces West Ham at home this weekend, and Zouma is a great shout for some defensive points!

Prospects:  A few weeks ago most Fantasy EPL fans wouldn’t have even heard of Brandon Williams.  Fast forward a couple of weeks, and the young defender should be targeted in most Fantrax Draft Leagues.  @draftgenie highlighted Williams in his Waiver Wire Targets article earlier in the week, and we’re on board with backing the youngster too!  In Gameweek 13, Williams conceded three goals, but still managed to post a double-digit score thanks to his goal and two key passes completed.  This weekend Manchester United face Aston Villa at home, which should offer Williams plenty of chances to get forward.  A clean sheet for Solskjaer’s men is unlikely, but a good performance from the newest United recruit is likely.

Prospects:  Last week we took a punt on Antonio, and it paid off massively as he returned 17.5 points after entering GW13 only at half time.  Here’s what we had to say last week: Antonio simply will be given a chance in the side of the coming weeks, and he’s likely to take it.  We all know there is a lack of solid midfielders in Fantrax Fantasy EPL, so taking a punt on Antonio is worth the gamble as he’s usually a pretty good Togga scoring player!

The versatile Englishman came on at half-time, and completely changed the mood in the West Ham side.  Anderson and Yarmolenko have seemingly given up on life under Pellegrini, and were very poor at the weekend.  The great thing about Antonio is that he actually tries!  He isn’t the most talented of footballers, but he puts a lot of effort in, which usually pays dividends.  So, bravo to any Fantrax managers that took our advice and punted on Antonio!  If he’s still a free agent in your draft league, then you need to sign him up immediately.  West Ham does have a tough schedule coming up, starting with Chelsea away in Gameweek 14, but still, try and bring in Antonio.

Prospects:  We’ve just got to back Norwich winger Hernandez after his 17 point haul against Everton in Gameweek 13.  The Cuban-born German didn’t gain any attacking returns, but put in a great display courtesy of dribbles and key passes, as well as tackles and interceptions!  Hernandez featured in the Hot List of our Hot or Cold Player Rankings this week, and rightfully so!  Last weekend Norwich managed to win their first game since defeating champions Manchester City back in September, so confidence will be high ahead of the home fixture against Arsenal.  The Gunners are really struggling at the moment, so Farke will fancy his chances this weekend.

We’ve covered a few additional points on the Norwich side here if you fancy a bit of insider knowledge into the squad as a whole!

Prospects:  Two Norwich players in the same article?  Oh yes!  The Canaries are riding high after defeating Everton last weekend, and we’re featuring a man who excelled on Fantrax during this win.  Kenny McLean registered a huge score of 16 points, thanks mainly due to his five key passes, and 12 aerials won!  The Scottish international was highlighted in the Waiver Wire Targets article for Gameweek 14 earlier in the week, and rightfully so.  Norwich looked much more robust during the victory over Everton, as McLean was stationed in central midfield alongside two defensive midfielders.  This allowed the Scotsman to venture a little further forward than usual.  McLean is worthy of his debut in our Sleepers XI article ahead of Gameweek 14, and we recommend bringing him in if you can.  Norwich faces struggling Arsenal this weekend.

Alternative Choice:  Milner (43% ownership) is a good alternative here, as he looks set to start this weekend with Fabinho picking up an injury in the Champions League on Wednesday night.

Prospects:  Next up is another combative midfielder in the form of Southampton’s Hojbjerg.  The Danish midfielder returned to the side for Gameweek 13 and gained 13 points during the 2-2 draw with Arsenal.  Hojbjerg gained some good defensive statistics, as well as providing two key passes!  The Saints are on the verge of a very nice fixture schedule, with Watford next up this weekend.  We would recommend bringing in the consistent defensive midfielder as a MID4 or MID5; Hojbjerg should provide decent and dependable points for any Fantrax side.

Alternative Choice:  We’re not sure how Fleck (47% ownership) still has below our 60% ownership threshold.  Put simply, these Chap should have 100% ownership!!  Fleck has been sensational in recent weeks, having added attacking returns to his game.  We’re not going to feature him as a main pick, due to the mockery that is his ownership, but if you’re playing Fantrax with Togga scoring, you simply have to try and bring Fleck into your side!

Prospects:  Is it finally time to take a punt on Demarai Gray?!  Our colleague @draftgenie covered the inconsistent winger in his Left Field Punts article last week, and we’re starting to believe in Gray.  The Englishman has gained 26 points from 48 minutes of action over the last three games!  This suggests that if Gray does actually earn a start for Leicester, he’s going to be a great asset.  Obviously entering the games late on when the opposition defenders are tired makes things easier for Gray, but in any case, anyone that’s starting in this Leicester side is worth acquiring.  Considering the busy festive schedule is on the horizon, as well as a midweek Gameweek 15, adding Gray to your squad is a key takeaway from our Gameweek 14 Sleepers XI article!!

Alternative Choice:  A similar player to Gray that’s worth a look is Moussa Djenepo (29% ownership).  The Southampton man has struggled with injuries since joining the club in the summer, but he has shown really good potential when he does play.  Djenepo faces Watford this weekend, and is likely to earn a start!

Prospects:  We backed McGoldrick last week after a string of consistent performances for Sheffield United.  The veteran Irishman gained a double-digit score once again, and therefore we’re backing him as our lone striker for Gameweek 14.  McGoldrick has established himself in the starting eleven for Chris Wilder’s men after a few new forwards were purchased over the summer.  In terms of Fantrax points, McGoldrick fills up his stats sheet with a mixture of key passes, shots on target, aerials, and successful dribbles!  This weekend Sheffield United face a trip to Wolves, in what should be a very interesting game.  If the low owned McGoldrick is still free, you simply need to sign him.  If its one thing you take away from our Gameweek 14 Sleepers XI article, let it be that!

Alternative Choice:  This news came in too late to feature him as a main pick, but Batshuayi (33% ownership) looks like a great add this weekend.  Abraham went off injured in the Champions League Wednesday night, and although the injury doesn’t seem to be serious, Batshuayi is likely to start this weekend as Chelsea face West Ham. 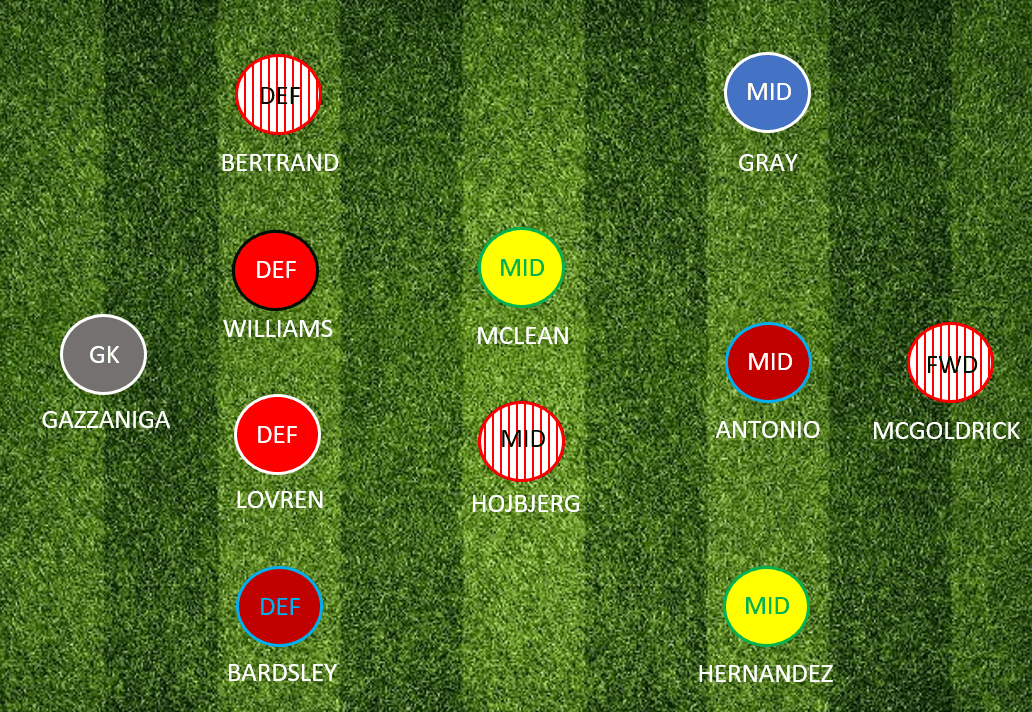