October 24, 2019 by The Fantasy Football Chaps Leave a Comment   |  TheFFChaps 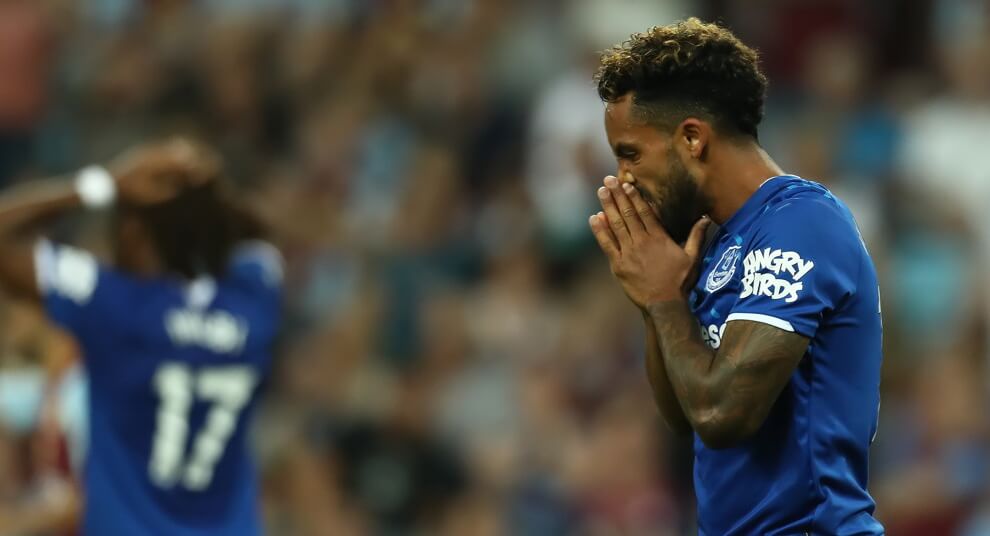 Our weekly Chaps Choices article provides Fantrax managers with a Fantasy EPL Sleepers XI.  These hints and tips will give you a better chance of picking up a victory each Gameweek.  Use our starting eleven of Premier League differential picks to find your golden ticket to a big score; one of our Gameweek 10 sleepers could easily make the difference in a Head-to-Head game!

Prospects:  Ryan is on a great run of form in Fantrax, averaging  13.1 points over the last four games.  The Brighton man has gained two clean sheets, and 21 saves in this time.  This weekend The Seagulls face a somewhat rejuvenated Everton side, but saves should be achieved if a clean sheet isn’t.  Brighton faces Norwich at home in Gameweek 11, so Ryan looks like a decent streaming goalkeeper for the next two games.

Prospects:  Fredericks is having a very good season for West Ham so far, and has finally established himself as the first-choice right-back.  The Englishman has been filling up his stats sheet with a mixture of attacking and defensive points, which is great news for Fantrax managers.  Four key passes and three accurate crosses allowed him to gain 16 points in Gameweek 8, but defensive stats are also helping his cause immensely.  Fredericks looks like a good prospect for the rest of the season, and he featured in our Top 100 ROS Player Rankings last week.  Sheffield United at home in Gameweek 10, and a decent chance of a clean sheet!

Alternative Choice:  Another right-back to consider is Everton man Sidibe (14% ownership).  The Frenchman made his first Premier League start in the Gameweek 9 victory over West Ham, and has a good chance of keeping his place in the side.  Sidibe faces a trip to Brighton this weekend, and could gain another double-digit return!

Prospects:  Zouma is back in the Chelsea team, and is playing pretty well alongside Tomori.  The big Frenchman has gained 25 points from his last two games, including a huge 17.75 points against Newcastle in Gameweek 9.  Somehow his ownership is on the decline, which means he’s eligible to feature in our Gameweek 10 Sleepers XI!  This weekend Chelsea face a trip to Burnley, and Zouma should come away with another double-digit return.  Luckily he’s not clean sheet dependent, so even if Wood and co. score, he should still gain a decent score.  Sign him up if you still can!

Prospects:  Sheffield United have been an absolute breathe of fresh air this season.  Many people thought they would struggle this season, but after nine games they are ninth in the league, and have conceded the least amount of goals!  They have also kept four clean sheets, and hence we’re backing O’Connell once again for our Gameweek 10 Sleepers XI!  The Blades center-back bagged an assist to go with his clean sheet last time around.

As we stated in our Hot or Cold Player Rankings article earlier in the week, every Sheffield United defender is worth signing at the moment!  O’Connell earns most of his points from aerials, clearances, and interceptions.  He’s actually ranked 5th overall for aerials, and 3rd overall for clearances.  Yet somehow he’s only 44% owned!!  Basham (6% ownership) is a more than able alternative if O’Connell has already been snapped up in your Draft League.

Prospects:  We’ve been waiting for a winnable Newcastle fixture to feature Willems, and here we are as they face Wolves at home in Gameweek 10.  The Dutch left-back gained a monster 28.5 points in the Gameweek 8 victory over Manchester United, and we’ve been watching him closely ever since.  Willems is an absolute unit and should score well this season for key passes and successful dribbles.  Because of this, Willems offers great Fantrax scoring potential.  Despite the fact that he plays for Newcastle, he’s still well worth a punt in Gameweek 10, and fully deserving of a place in our Sleepers XI.

Alternative Choice:  If you’re struggling to take a punt on a Newcastle defender, then perhaps a Watford one will take your fancy?!  Kabasele (6% ownership) has returned to the Hornets’ side and has performed pretty well the last two games.  Double digit returns were achieved in Gameweek 8 and Gameweek 9!  This weekend Watford face Bournemouth at home and have actually been improving in recent weeks.  A decent score could be achieved by Kabasele.

All four of these Defenders are currently featured in the Hot section of our Hot or Cold Player Rankings!  All of these Chaps are well worth acquiring in Fantrax Draft Leagues!!!

Prospects:  Last week we had a last-minute change of heart, swapping Harvey Barnes out of our Sleepers XI for teammate Marc Albrighton.  Barnes went on to bag two assists and a score of 23.5 points.  This week we’re not making the same mistake, as the speedy Englishman returns to our team.  Leicester faces Southampton away this weekend and is on really terrific form.  Any and all Leicester assets simply need to be signed up due to their form and fixtures, so we’re shocked to see Barnes’ ownership as low as 39%.  It’s always a bit of a punt going with the Leicester youngster as he’s not guaranteed to start, but this week should be worth the gamble!

Alternative Choice:  Another player to take a bit of a punt on, is the returning Solly March (56% ownership).  The Brighton man has had to bide his time whilst recovering from injury, but he got 45 minutes off the bench in Gameweek 9.  This weekend, March could earn a start at home to Everton.  If he does, then he’ll be well worth signing.  The Englishman has averaged 9.8 points per game when he’s started this season!

Prospects:  John Fleck is a scoring machine.  The little known Scottish midfielder has been scoring consistently well for the last five games, and you Chaps simply have to sign him up.  His last five scores have been; 9.5, 7.5, 9, 8.5, 8.  Fleck is the type of player that Fantrax Champions need to have in their squad.  A player that can be slotted into the team alongside more illustrious players like Mahrez or Vardy.  A player that is guaranteed to score 8 or 9 points, to ensure that your team ticks over even when your big-name players are rotated or fail to score.

This weekend Fleck faces West Ham away, but whatever the fixture, the Sheffield United man will get you those 8 or 9 points.  Fleck is perhaps the most under the radar pick from the Gameweek 10 Sleepers XI, but he’s potentially the one that will end the season with the most points from all of these players.

Alternative Choices:  We’ve got a few more steady scoring midfielders for you Chaps to consider this weekend!  Westwood (39% ownership), Propper (37% ownership), and Billing (53% ownership) all offer decent points potential for Gameweek 10.  These players will consistently score you around 8 to 10 points every week, and are, like Fleck, essential players for you to position next to your ‘boom or bust’ players.

Prospects:  Cleverley has been playing really well, and scoring really well, for weeks.  The Watford man has an average points per game of 10.4 from the last five games, and yet his ownership is back down to 40%.  Watford played a lot better than they have been in Gameweek 8, and they have a chance of picking up their first win of the season at home to Bournemouth this weekend!  Cleverley is guaranteed to play and is scoring well without the need for attacking returns.  Right now he’s an ideal MID4 or MID5 for any Fantrax team.  Sign him up, Chaps!  You won’t be disappointed.

Prospects:  Saint-Maximin has performed very well during his last three appearances for Newcastle.  The Frenchman has gained 26 points from 185 minutes of football.  That’s a points-per-90 ratio of 12.65, and he hasn’t registered a single attacking return!  Key passes and successful dribbles are his bread and butter.  If Saint-Maximin can start adding goals or assists to his game, he’s going to be an absolute gem this season.  Newcastle faces Wolves at home this weekend, so the enigmatic winger has a superb chance of picking up an elusive attacking return.  If Saint-Maximin is a free agent in your Draft League, he simply has to be signed.  He’s the marque recommendation of this Gameweek 10 Sleepers XI!

Prospects:  Brighton has been playing really well recently, but unfortunately they only have the victory over Tottenham in Gameweek 8 to show for it.  The Seagulls lost to a last-minute Aston Villa goal last time around, after playing for nearly an hour with 10 men.  Graham Potter is really working wonders with this Brighton squad though, producing a passing that is comfortable on the ball.  This is great news for Fantrax managers, as passing sides tend to end up with a good number of counting stats.  Most of Brighton’s players have fairly low ownership, but most of their players are actually worth owning!  Neal Maupay is no exception.  The French forward scored against Tottenham in Gameweek 8 and gained a respectable 8.5 points in Gameweek 9.

This weekend Brighton faces Everton at home, and Maupay has a good chance of picking up another decent points score.  If he doesn’t gain attacking returns, then key passes and shots on targets should fill out his stats sheet pretty well.  Brighton face Norwich at home in Gameweek 11, so Maupay is well worth a punt for the next two games at least!

Prospects:  Theo!!!  He’s back!!  Walcott has been rarely spotted over the last 12 months, but he got his chance in Gameweek 8, and boy did he take it!  Marco Silva needed a win, and a change in personnel achieved just that.  Walcott started on the right wing, and gained 15.5 points.  The Englishman produced an assist, as well as two key passes and one shot on target.  Walcott is guaranteed to start once again this weekend, as Everton face a trip to Brighton.  This is surely a short term option, but for any Draft Manager in the market for a forward should take a punt on Walcott!  If he does maintain his form, then he’s likely to keep his place in the side. 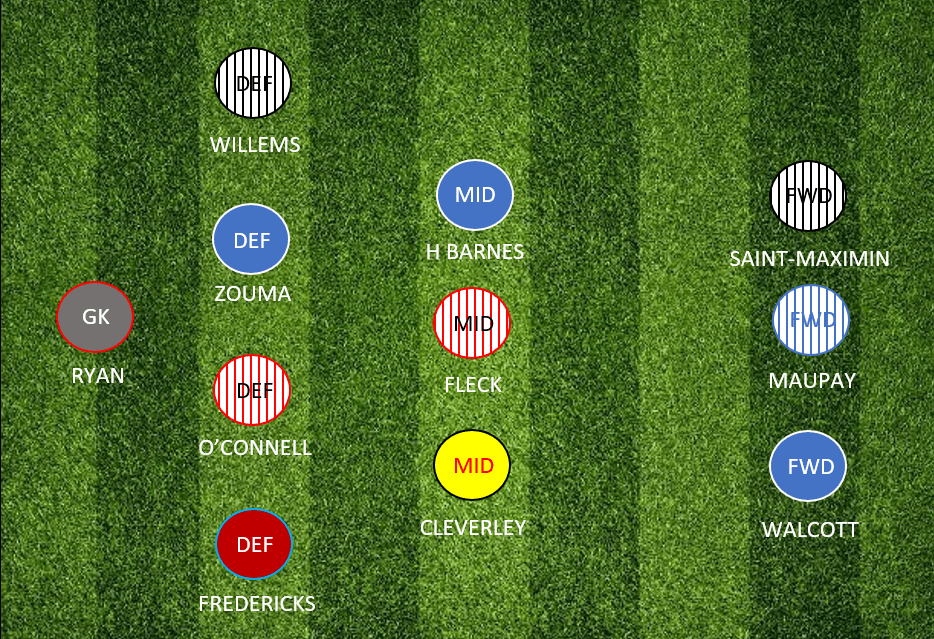