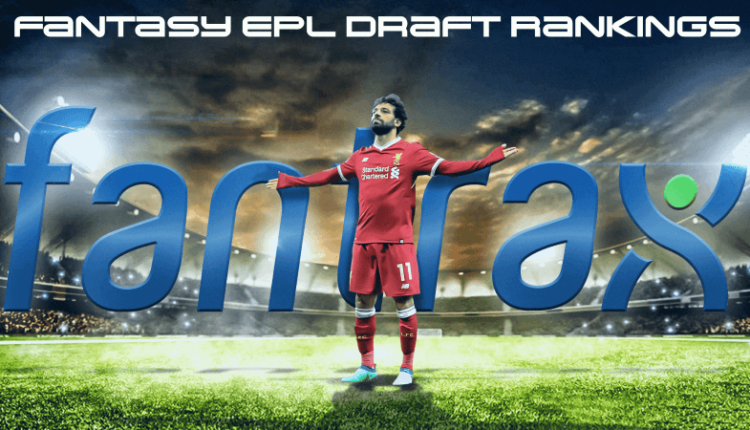 Welcome to our Fantasy EPL Draft Rankings Top 200 players for the 20/21 season!  Our Draft Rankings will be an essential part of your preparation for the new season.  Use these projections to get ahead of your fellow Fantrax Draft Managers!

Here we rank our Top 200 Premier League players, based on their overall prospects on Fantrax this season!  Our Fantrax HQ writers have joined forces to create Consensus Rankings to produce more accurate results.  Use these Top 200 Draft Rankings alongside our Tiered Rankings Cheat Sheet!

As we’ve said above, these are Consensus Rankings provided by our Fantrax HQ writers and analysts The FF Chaps, Draft Genie, Luke Wilkins, Joe Williams, and Tottiandor.  They have each ranked their own Top 225 players, and these have been combined to create an average ranking for each player.  This means that these Top 200 Player Rankings will be the most accurate set of rankings we’ve ever produced!!!

All five our of analysts ranked Kevin De Bruyne 1st in their Draft Rankings.  He’s the best player, and Fantrax asset, in the league.  It’s a no-brainer that he’s the first pick off the draft board this year!  Liverpool pair Mohamed Salah and Sadio Mane are ranked 2nd and 3rd, with Bruno Fernandes coming in 4th.  All of our analysts, other than Manchester United fan Genie, ranked the midfielder in 4th place, with concerns that he can keep up his incredible form.  Raheem Sterling is ranked 5th, and Liverpool defender Trent Alexander-Arnold comes in at 6th.

From this point the rankings were fluctuating, as predicting the rest of the Top 10 Fantasy EPL players is a tough task.  Son Heung-Min was ranked 7th overall, Timo Werner is 8th, and Raul Jimenez is in at 9th despite The FF Chaps downgrading him after Doherty departed.  Marcus Rashford completes the Top 10.

Manchester City’s newly reclassified forward Riyad Mahrez is ranked in 11th, despite a low rankings from The FF Chaps and Luke.  Christian Pulisic comes in at 12th, with Adama Traore 13th.  Our analysts had some differing opinions on if the Wolves forward can match his points scoring from last season!  Jack Grealish is ranked 14th, with Pierre-Emerick Aubameyang in 15th.  Harry Kane is ranked 16th in our Top 200 Draft Rankings, with Genie giving him the highest personal ranking of 9th!  James Maddison and Jamie Vardy are up next, closely followed by Manchester City star Sergio Aguero at 19th.  Everton defender Lucas Digne completes the Top 20.  Our analysts all agree that he’s the second-best defender this season, with The FF Chaps and Joe ranking him the highest.

Newcastle favorite Allan Saint-Maximin is ranked in 21st in our Fantasy EPL Draft Rankings, with all analysts apart from Luke predicting a great season for him.  New Chelsea man Kai Havertz is up next, ranked 22nd overall.  Anthony Martial and Willian are up next, with Gabriel Jesus ranked 25th.  Danny Ings comes in at 26th, with Hakim Ziyech and Roberto Firmino 27th and 28th.  Totti gave Firmino the highest personal ranking, but despite this the Brazilian is ranked a lowly 28th overall.  James Ward-Prowse is 29th, with Paul Pogba a disappointing 30th.  The FF Chaps can be blamed for this one, as they ranked him 37th overall, which was much lower than our other analysts!

Michael Antonio kicks off the next section of our Fantasy EPL Draft Rankings, with a ranking of 31st overall.  Manchester City youngster Phil Foden is ranked 36th overall, with all of our analysts roughly agreeing that this is where he should be drafted.  Jarrod Bowen is ranked 37th overall, but our analyst’s rankings fluctuated from 30th to 46th for the West Ham man.  The FF Chaps and Luke provided these differing ranks.  Dwight McNeil comes in a disappointing 40th, despite receiving some strong rankings from The FF Chaps and Totti.  The reason for his low ranking…?  Genie only ranked him at 60th overall, so his average was dragged down!  West Brom’s Matheus Pereira is ranked 46th overall, and January signing Tomas Soucek gains a solid ranking of 51st after some strong performances during the Premier League restart.