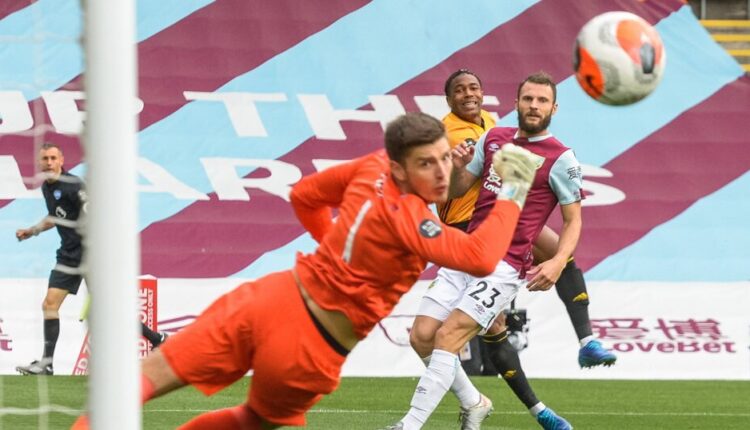 Welcome to our Fantasy EPL Goalkeepers Draft Rankings for the 20/21 season! Our Draft Rankings will be an essential part of your preparation for the new season.  Use these projections to get ahead of your fellow Fantrax Draft Managers!

Here we rank the Top 20 Goalkeepers, which is basically the first choice shot stopper for each EPL team!  As outlined in our Fantasy EPL Draft Strategy Guide, Goalkeepers should be your lowest priority.  However, it’s still important to draft the best player that you can when its your turn to pick a Goalkeeper!

These Goalkeepers Draft Rankings will be constantly updated as we gain more information from friendlies.  New signings will be added as and when they occur.

An important note to start off our Goalkeepers Draft Rankings is that you should try and ignore clean sheet potential when looking for a shot-stopper.  For us a good goalkeeper to own on Fantrax has a good ratio between Saves and Goals Against.  You need to be looking for a goalkeeper who isn’t dependent on clean sheets – one that concedes a small amount of goals but also makes a lot of saves is the type of goalkeeper you need to be looking out for!  Our 19/20 Saves Made versus Goals Against table at the bottom of this article will be referenced throughout this article.

With this in mind, our Tier 1 Goalkeepers are Nick Pope and Hugo Lloris. Martin Dubravka was in this Tier prior to suffering an injury last week.  He looks set to miss a couple of months of action.  For us, these two shot-stoppers match the criteria mentioned above.  Burnley man Pope made the 4th most saves last season, and although he conceded a fair amount of goals, he did keep the second most clean sheets due to the well organized Burnley defense in front of him.  Lloris is up next, as he gained the highest points per game ratio among the goalkeepers last season.  The Frenchman only played 21 games due to injury, so his saves and goals against statistics are hard to compare against the other goalkeepers.  The ‘Tottenham Keeper’ did rank second overall in our table below, which was a combination of Lloris’ stats and his deputy Paulo Gazzaniga.

These two goalkeepers were in the top four of our Saves Made versus Goals Against rankings from last season.

Next up in Tier 2, we’ve got the best goalkeeper in the league; Liverpool’s Alisson.  The Brazilian doesn’t make many saves, but he’s bumped up the rankings due to the fact that he concedes hardly any goals.  His statistics quoted at the bottom of this article are skewed by the fact that his game time was shared with back-up goalkeeper Adrian.  Rui Patricio is ranked in 8th, and Lukasz Fabianski completes Tier 2 in 9th place.  The ‘West Ham Keeper‘ performed poorly in our Saves Made versus Goals Against rankings from last season, but this was due to these statistics including games played by poor back-up goalkeepers.  All of these Tier 2 goalkeepers have a decent ratio between their Saves Made versus Goals Against ratios.  Either they make a lot of saves or they concede few goals!

Tier 3 starts off with Manchester City’s Ederson.  The reason he’s ranked in only 10th place is due to the lack of saves the Brazilian makes.  Yes, he won the Golden Glove award last season and kept 16 clean sheets, but he ranked just 17th overall for Saves Made.  Therefore, his ratio between Saves Made and Goals Against was fairly low throughout the season.  Ederson’s points per game average was the 10th best among goalkeepers that played 20 games or more, and he was a lowly 18th overall in our Saves Made versus Goals Against rankings from last season.  Next up in Tier 3 we’ve got Alex McCarthy, Kasper Schmeichel, David de Gea, Karl Darlow, and Jordan Pickford.  All of these goalkeepers score fairly averagely for Saves Made and Goals Against, as you can see in the table below.  These are streaming goalkeepers for the upcoming season.

In Tier 4 we have the three promoted goalkeepers Sam Johnstone, Kiko Casilla, and Marek Rodek, as well as Aston Villa’s Tom Heaton.  We’re unsure as to how many saves they are going to be making, or how many goals they are likely to be conceding at the moment.  We wouldn’t recommend drafting these shot-stoppers; wait and see how they get on during their first few games!  And ranked in last place is Chelsea’s Kepa Arrizabalaga; the world’s most expensive goalkeeper!!  The young Spaniard has a terrible ratio between Saves Made and Goals Against, due to the fact that he makes very few saves, and concedes a lot of goals!  Kepa made 55 saves last season but conceded 47 goals.  His average points per game was also a horrible 2.73.  Avoid him at all costs.

Fantasy EPL Rankings 19/20: Saves Made Versus Goals Against 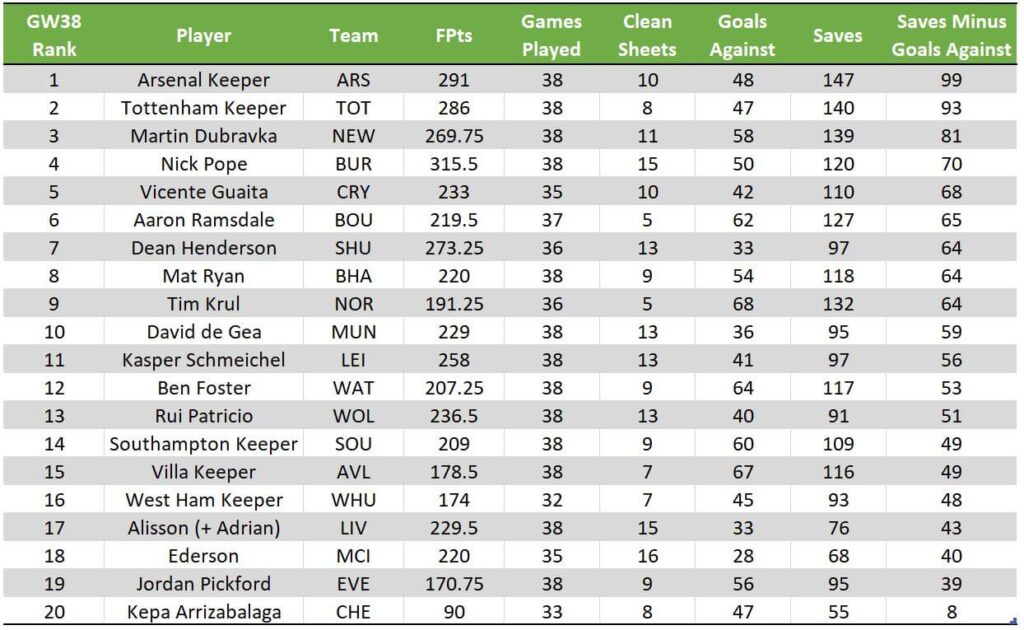 As ever, we would recommend leaving your goalkeeper draft pick towards the end of the draft.  If you really want a Tier 1 level goalkeeper, then take Pope or Lloris between rounds 12 or 13.  Otherwise, we would leave drafting your goalkeeper until rounds 14, 15, or even 16.  The reason for this is that goalkeepers notoriously score fairly poorly in Fantrax due to the limited ways by which they can score points.

Therefore, a tactic that many managers partake in is streaming goalkeepers throughout the season.  The basic premise is that if you are in a 12 team league, and all managers own just one goalkeeper, there will always be eight free agent goalkeepers available on a week-to-week basis.  And more free agent goalkeepers if you’re in a league with fewer managers.  Managers can, therefore, pick up the best goalkeeper from the free agent pool depending on the particular fixtures each gameweek period.

Keep this in mind during your Fantrax draft – goalkeepers are the lowest priority.