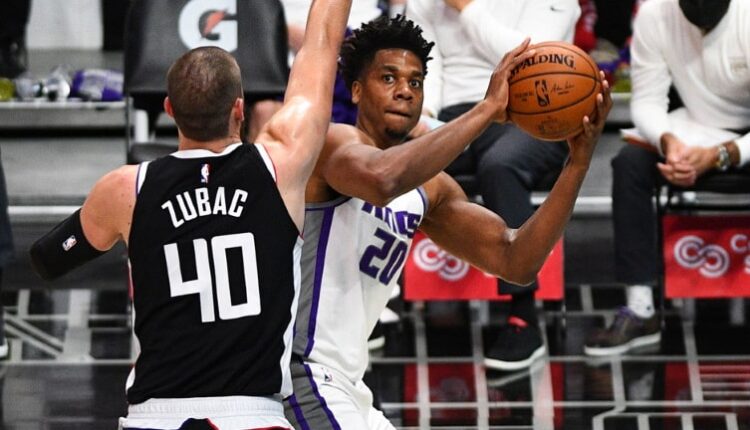 There are 14 games across the NBA on this weekend’s slate. Like last weekend, only one team has a back to back, the Sacramento Kings. In looking to pick up points at the end of a fantasy week I’d always advise against dropping players you wouldn’t have otherwise if you weren’t chasing points. That being said, if you have one or two in-flux roster spots, the weekend always presents an opportunity to use a couple of streamers and adjust on the fly. Punt assists to win in blocks, go all-in on three-pointers, or take a chance on potential breakout candidates.

As mentioned the Kings are the lucky, lone participant of two games this weekend. With injuries to Richaun Holmes and Harrison Barnes, Sacramento presents a number of interesting pick-up options. Hassan Whiteside, an unmitigated fantasy flop in 2021, should have a chance to pick up big stats this weekend, He dropped 26 & 16 with 5 blocks on Monday and followed it up with (Enter Thursday stats). Corey Joseph will also likely stay in the starting lineup, in place of Barnes, and is always a good source of scoring and threes if given the minutes. Even though he’s owned in 92% of Fantrax leagues, Marvin Bagley is worth mentioning as well, though his minutes seem to be all over the place. Still, even if these players have average games, they have the opportunity to do it twice! Thus their value remains extremely high.

Piggybacking off the Sacramento portion, the Bulls face off against those Kings on Saturday. The Kings, as a healthy team are the very worst in the league defensively, and they’ll likely be without Holmes and Barnes as I mentioned. Some interesting targets you may consider depending on your statistical needs include; Garrett Temple, Patrick Williams, and Thaddeus Young. In fact, if young is still available, (77% rostered currently) you should pick him up for the foreseeable future.

On Saturday two of the worst defensive teams matchup in Washington, as the Blazers come to town. Both teams are in the bottom 5 in defensive efficiency, and Portland is littered with injuries. Offensively the Blazers are in the top 3 in scoring, and 3pt%,  while the Wizards are coming off back-to-back 130 point efforts. Most players rosterable on both teams already are at about 70%+, but that means there is still a chance on one of the following; Gary Trent Jr, Carmelo Anthony, Davis Bertans, and Rui Hachimura.

This one is pretty simple, if you’re in a tight matchup for assists, Pick up T.J. The veteran guard has had 12+ assists in each of his last three games. McConnell hasn’t just been a one-trick pony either, over his last four he’s grabbing 1.5 steals and blocks as well. He is currently only owned in 61% of leagues across Fantrax.

The Magic are currently missing three point guards due to injury, and MCW is the beneficiary. Since entering the starting lineup two games ago He’s averaging 17.5 points and 5.5 assists. He isn’t necessarily the most exciting player, and likely won’t bring you much outside of efficient scoring and assists, but with the injury woes in Orlando, Carter Williams could be one of the more serviceable streamers in the weeks to come.

Now hear me out. His eligibility is what makes him a luxury. Much like Josh Hart, he’s a guard who can get you 7-12 rebounds. When chasing in rebounds it often doesn’t do you any good to drop a big for another big. In this instance, it’s very likely if you drop a SG eligible player for Nwaba, he will double your rebound output from that position.