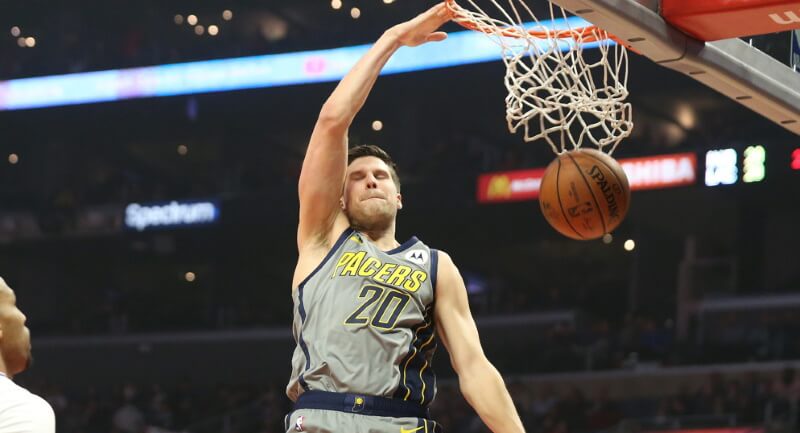 Here we are, back again searching for the leftover statistics that may be floating around in the purgatory that is free agency. Like most other weeks this list will focus only on those weekend streamers whose teams have 2 games in 3 nights, just trying to get people more bang for their buck.

What?! Your fantasy basketball league wasn’t hosted on Fantrax this season? Inconceivable! Check out all the features of Fantrax Fantasy Basketball Commissioner and we’re pretty sure you’ll come around to our way of thinking next year.

Full disclosure, this one may be a bit of a flyer. Alas, I task anyone to predict the health of the Cavaliers front-court a mere two games out, you’re not gonna have a good time. The angle here is pretty straightforward, If he plays he will likely grab 10+ boards and shoot well over 50%. In his last two outings, he’s averaged 12 points and 12 rebounds and only missed 2 of his 12 shots. If you’re out there chasing FG% and rebounds Isaiah Hartenstein is a solid choice, just keep an eye out for the statuses of Kevin Love and Larry Nance III.

Jalen McDaniels, in his second year out of San Diego State, has entered the starting lineup for the Hornets due to the extended absence of Gordon Hayward. Fantrax and other sites list the 6’10 forward as a SF/PF but in the current lineup, he plays the center alongside PJ Washington and Miles Bridges. In his first start, McDaniels compiled 21 points, 6 rebounds, 3 assists, 2 steals, and hit 3 of his 6 shots from deep. With Hayward expected to miss 3.5 more weeks and Malik Monk sidelined for two, McDaniels is likely to be the greatest beneficiary. It isn’t out of the question to think he can produce a stuffed stat-line consistently, and certainly one of the more intriguing weekend streamers if you’re seeking an all-around stat-getter with the potential to break out.

The young guard received his first start of the season Thursday, racking up 8 assists and 2 steals to go along with a modest 9 points. Malachi Flynn doesn’t project to score 20+ a night, but his value this weekend could be in usage. Despite not starting, his previous 3 outings, he also saw 30+ minutes, and while he hasn’t scored over 20 points, nearly half of his field goals made are of the three-point variety. Flynn’s uptick in minutes has also resulted in averaging over 5 assists and 2 steals over his last four contests. It may very well be the rookie guard’s time with injuries to Kyle Lowry and Fred VanVleet he is almost a lock to produce healthy lines in both games this weekend.

He’s back healthy and playing for the Orlando Magic, that about covers that. In all seriousness, the rookie guard is back on the court after missing nearly 2 months with fractured ribs. He returns to an almost entirely turned-over roster, but the departures and new faces shouldn’t really affect his usage. With Markelle Fultz already out for the season, and the Magic back-court lacking depth even prior to the trade deadline Cole Anthony always projected to see solid minutes upon return. In his first game back he tallied 13 points and 7 assists and should be a good source of scoring and assists statistics with an upside in steals this weekend, and beyond.

Fun fact, he is the starting point guard for the Detroit Pistons… Well, at least he was last night. The Pistons backcourt is clogged with journeymen and young guys looking to crack the rotation. Coy Joseph was finally given the opportunity to start Thursday night and rewarded his coach’s decision to the tune of 24 points, 7 assists, 3 rebounds, and a steal and block respectively. Expecting that line isn’t likely, but his per36 numbers during his short stint in Detroit had suggested it was given more time he’d produce, and that he did. Joseph tallied 31 minutes in his start and will likely remain in that position over the weekend as well.

The Injury bug is ravaging the Pacers and there is a chance three starters could miss both games on the slate this weekend. Even without Malcolm Brogdon and Domontas Sabonis the last two games McDermott’s playing time and stats haven’t jumped off the screen, but with the addition of Myles Turner to the injury report, Dougie McBuckets may yet have a chance to shine. A great weekend from the Pacers forward could win a close matchup in three-pointers made if he’s given enough floor time.

Are you digging on Michael’s weekend streamers? For more help in making that final playoff push check out the latest Fantasy Basketball Waiver Wire.