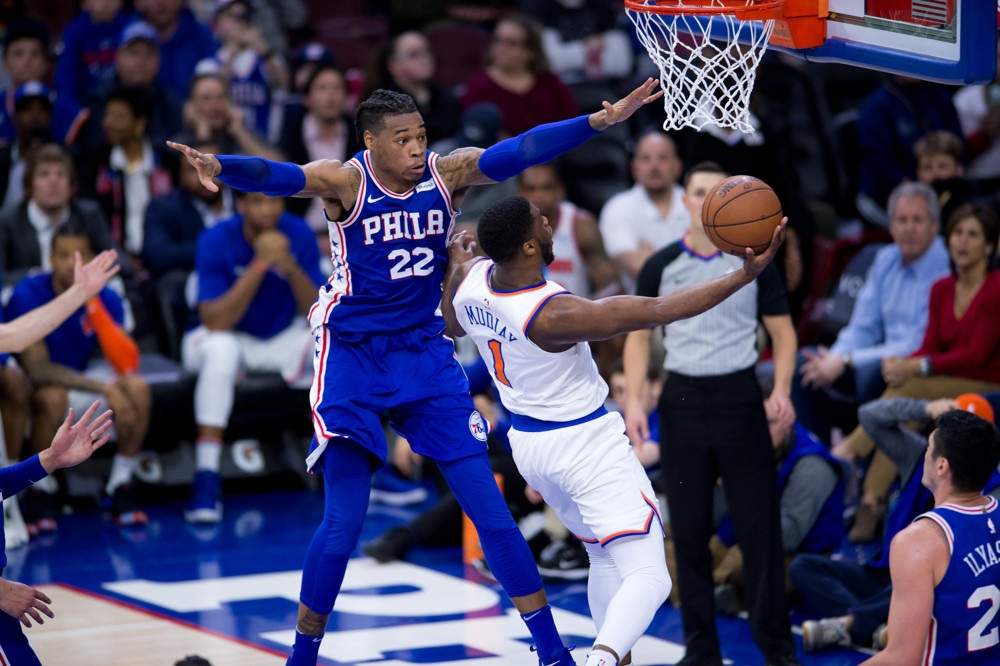 Derrick Jones Jr.: With the number of injuries in Miami, Jones and Tyler Johnson are the next guys up. When given the minutes, Jones has been awesome this year performing as a top 40 fantasy basketball player for the past two weeks. Jones is averaging 8.8 rebounds and 1.5 blocks over his past six games. For leagues tracking offensive boards, he’s gathering a whopping 3.8 per game over that span. He’s also adding 2.2 steals per game and shooting at a 55% clip. Jones is heating up and should not be on the waiver wire with the way he’s playing lately.

Reggie Bullock: Bullock is lighting it up from deep over the past three games, nailing 5.3 three-pointers over that span. Stanley Johnson and Luke Kennard are taking a back seat to Bullock as the primary winger in Detroit, and his recent hot streak won’t change coach Dwane Casey’s mind. If you’re in need of threes and scoring, Bullock is a fine choice and is still available in over 60 percent of leagues.

Emmanuel Mudiay: Mudiay had another impressive showing Friday night dropping 30-plus points for the third time in the past five games. At this point, he’s running away with the starting point guard job in New York. As mentioned last week, his downfall in fantasy basketball were his percentages which have turned a full 180 this year. He’s also nailing threes which is a nice bonus. Mudiay is right on the precipice of that 60 percent ownership so grab him off the waiver wire if he’s still out there in your league before it’s too late. Week 11 is already getting late to hop on the Mudiay train.

Monte Morris: (From last week’s waiver wire) With all the injuries in Denver, Monte Morris has stepped up to the plate and played well all year long. Morris has posted a 13.1/3.1/3.8 line over his past eight games on nearly 52-percent shooting. He’s also draining 1.9 threes over that span. He has taken over the Nuggets’ sixth man role for the foreseeable future. Don’t expect him to relinquish it to Isaiah Thomas once he returns. He’s on fire right now, so don’t let the fire burn out on the waiver wire.

Tyler Johnson: As mentioned earlier, Johnson has taken over Dragic’s role and has played well in his stead. Johnson will get a lot of run over the next few weeks with reports ruling Dragic out for the next two months. Though you’ll rarely see an eye-popping stat line from TJ, he contributes across the board on respectable shooting percentages. Johnson is like the mini swiss army knife of fantasy basketball. Probably not your most prized possession, but is versatile enough to fix the little problems on your fantasy basketball team.

Garrett Temple: Temple is enjoying a career year in his age-32 season in Memphis. While he’s not the most exciting name (he might actually be close to the least exciting) in fantasy basketball, there’s no denying his production of late. He’s inching closer to top-50 value over the past week and it’s his defensive contributions that are at the root of his rise. Temple is averaging 11.5 points, 1.5 threes, 1.5 steals and 1.3 blocks. That production is reminiscent of Danny Green who coincidentally missed his first game of the season on Friday night.

Kevin Huerter: (From last week’s waiver wire) The Hawks’ other first-round pick is finally getting involved in the rotation. Over 50 percent of his field goals come from behind the arc, so he’s a great option for owners seeking threes. He’s also contributing in other areas, averaging nearly 1.4 steals over his last eight games. The Hawks are going nowhere, and some of their veterans are mid-season trade candidates. Huerter’s role is going to be at risk when Tauren Prince returns, but he’s making a strong case to stay on the court. He’s a sneaky dynasty add for owners looking further ahead than 2018-19.

Robert Williams: The big man nicknamed Time Lord is finally getting some run over the last five games. Though his playing time has been limited, Williams is blocking 3.2 shots per game. He’s also grabbing 6.2 boards and scoring 5 points on 75% shooting in just 18 minutes per game over those same five games. Al Horford has missed the last six games and Aaron Baynes is expected to miss the next 4-6 weeks. Despite sharing time with Daniel Theus, Williams offers more upside for the Celtics. He’s a nice addition for teams looking for blocks and can give owners a nice bump in boards and FG%.

P.J. Tucker: Tucker has been one of the few bright spots in the Rockets’ backward season. It’s especially true over the past week, where Tucker is flirting with top 50 value. His 3.5 threes on over 50-percent shooting are his main positives, but he’s also chipping in nearly 7 rebounds per game. Not bad for a player available in nearly 60 percent of leagues as of week 11.

Thomas Bryant: Bryant’s minutes have been inconsistent but he has played well in limited time. The Wizards have been looking for a big man for years and Bryant could be a nice development project that could pay off near the end of the season for fantasy basketball owners. Bryant has a decent shooting stroke and has knocked down 3 threes in his last four games. Bryant also offers shot blocking, averaging 1.5 over his last four. If you’re desperate for a center, you could do worse on the waiver wire than Bryant.

Landry Shamet: The 76ers are desperate for three-point shooting, and Landry Shamet offers just that. Philadelphia is throwing him into the fire and Shamet has rewarded them by hitting at least a three in six straight games.

OG Anunoby: The Raptors are playing without Jonas Valanciunas and Serge Ibaka, leading to coach Nick Nurse to tinker with his small ball lineups. OG got the start at power forward Friday night and dropped a season-high 21 points.