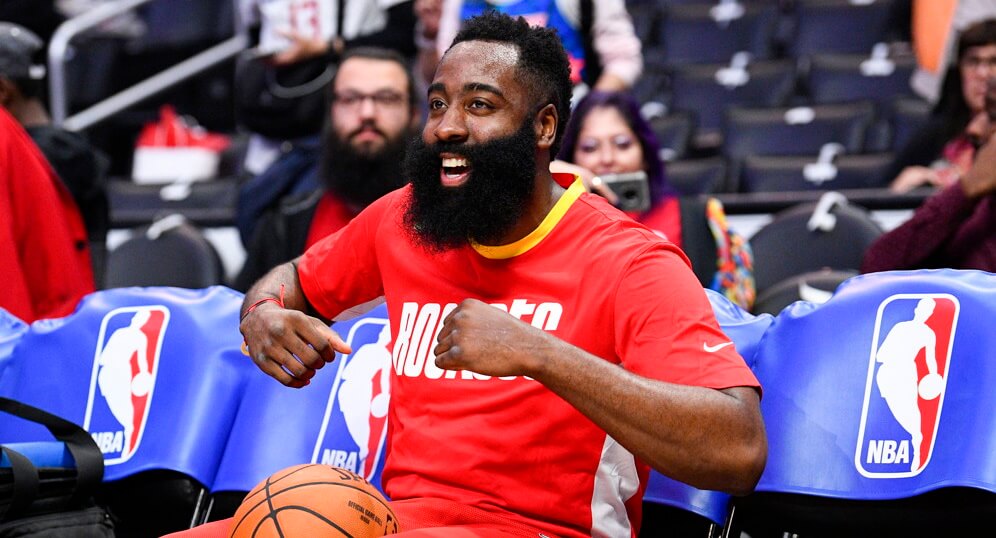 Wow, now that’s a blockbuster deal! The Rockets finally had enough of James Harden’s pouting and a big trade finally ensued sending the former MVP to the Brooklyn Nets creating a new big-three or a 2.5 since no one can find Kyrie. Victor Oladipo was sent to Houston while Caris LeVert finds a new home in Indiana and Jarrett Allen is off to Cleveland completing the four-way trade. There’s not a whole lot of activity to do on the fantasy basketball waiver wire with this trade unfortunately but still a few players on the rise and we’ll take a look at some other teams who have been dampened by the COVID bug in the past week.

Depending on your league settings, James Harden has been fine stats-wise this season but still a bit of disappointment as he hasn’t fully lived up to his number one pick stature.  Harden is sitting ranked around the 13-19 spot on the season. This trade is a slight downgrade for the eight-time all-star on his preseason rank, but he should be able to duplicate his 2021 numbers and keep at a top 15-rank in Brooklyn. There’s no denying Harden will be a heck of a lot more motivated now as it was clear his compete level in Houston was dwindling by the seconds.

The bigger impact here is definitely to Kyrie Irving. Irving has been one of the top producers in fantasy this season but is currently on a bit of a hiatus. Once the dust all settles, this will still be a slight downgrade for both Durant, and Irving as it just becomes too hard to put up top-five numbers when you add in a talent like Harden. Durant has shown he can produce at will though and should be fine for top-10 production with Harden next to him.

DeAndre Jordan is one of the few big winners in this deal and is worth an add off the waiver wire if you’re slacking in the rebounds department. Jordan was pretty much irrelevant this season with averages of 4.1 points and 6.5 rebounds but now becomes the starting center in Brooklyn. It’s not a must-add because when everyone is healthy there won’t be a ton of scoring for the big man, but with hardly any competition in his way, Jordan should be able to average 10 rebounds per game with a block or two. In Wednesday night’s start, Jordan put up 9 points, 12 rebounds, and 2 blocks on 100% shooting.

It was pretty clear James Harden had to go and I like this move for Houston as the future will be bright and the team can now focus on positive attitudes. Harden just sucked the life out of Houston this year, so I think this is pretty much a plus for all the main stars. John Wall and Christian Wood have both been awesome this season and it’ll be hard to improve drastically but anytime you remove one of the most dominant ball handlers in the NBA from your team, there is going to be some extra opportunity. Victor Oladipo has been a success this season with averages of 20/6/4 and as long as he gels with John Wall, he should be able to duplicate those numbers with potential for a slight uptick.

This one is a bit tricky but overall, I consider this a win for the 26-year-old who’s been on the cusp of stardom this season. LeVert has been on an absolute tear this past week but that wasn’t going to last as eventually, he would have reverted to the 3rd option in Brooklyn. That’s where he’ll find himself in Indiana, but Malcom Brogdon and Domantas Sabonis are not as ball hoggish as Durant and Irving can be. LeVert could be a solid buy-low candidate in a keeper league if you find a sour owner with the trade.

The Cavaliers swooped in with a great deal getting a center for years to come in 22-year-old Jarrett Allen. Allen becomes a great buy-low in my opinion as not only will Andre Drummond likely be on another team next season, there’s a strong chance he’s traded at the deadline which could lead to monster numbers for Allen this year. As of now, Allen isn’t likely to come out soaring like he has been of late but should still start at PF and contribute for the Cavs right away who are pretty depleted at the moment!

It’s too bad Celtics games keep getting postponed as Daniel Theis would have been in for a monster week. As of now just two games remain for the week and players are slowly going to come back making Theis and Pritchard less attractive. Still solid DFS plays to finish off the week

Jimmy Butler, Goran Dragic, Kendrick Nunn, Bam Adebayo, Moe Harkless, and Udonis Haslem are expected to miss the next week of action due to health and safety protocols. So, it’s the Tyler Herro show for Miami. Not too far behind and available in fantasy leagues are SG/SF Duncan Robinson, PF/C Kelly Olynyk, and F Precious Achiuwa. All three are great adds for the remainder of the week and are getting all the minutes they can handle with just eight active players. Duncan Robinson led all players last game with 46 minutes of action racking up 26 points while Kelly Olynyk has been producing for a while now covering multiple categories.

The Pelicans situation is still fluid but one to keep a super close eye on for fantasy basketball purposes. Zion Williams had an inconclusive COVID-19 test and missed Wednesday’s game, but the Pelicans do not fear an extended absence.

Lonzo Ball is considered day-to-day due to jumper’s knee and Eric Bledsoe is day-to-day with eye irritation. Both aren’t expected out long, but Nickeil Alexander-Walker got the start and put on a show Wednesday with 37 points and 8 rebounds and will be the key contributor if Ball or Bledsoe are forced to miss more time.

SG/SF Josh Hart could be worth a stream as the 4th-year pro has come out of nowhere posting at least eight rebounds in 8 of his past 10 games. Steven Adams will be a strong DFS play if Zion has to miss more time due to protocols.