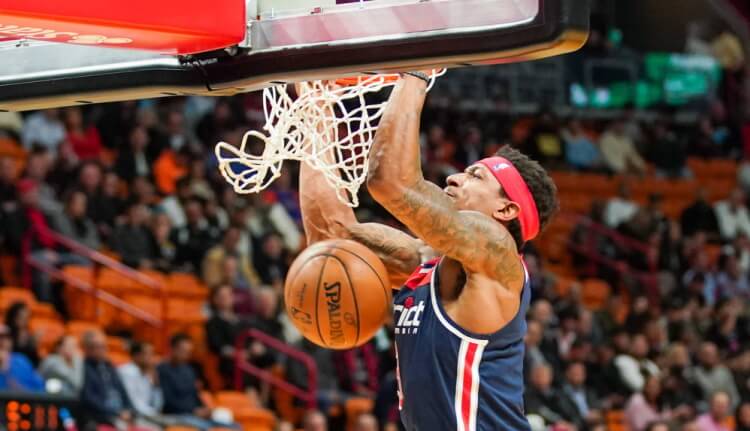 Bradley Beal has had a disappointing season for fantasy basketball. He’s only played 26 games to date and has been underwhelming when he has played. Making it the perfect time to pounce and take advantage of a disgruntled fantasy basketball manager. Besides Beal, another player I’d consider buying low on is De’Anthony Melton. Some sell-high candidates this week could be Gary Trent Jr. and Nikola Vucevic. This is your sell high and buy low column for week 15 of the fantasy basketball season (9-category leagues).

When I think of Bradley Beal I think of the second-round fantasy basketball player he was for three straight seasons (2018-2021). Beal is still only 29 years old so he should have some good years left. However, last season was a disaster. Beal only played half the season and was a fringe top-75 guy on per-game stats. Fantasy basketball-wise, he took a hit in points, threes, steals, and free throws. He’s taking even fewer free throws this season and has the injury red flags again. I’m a buyer because I think they’ll be a frustrated manager in your league that’ll sell low.

Bradley Beal has been the 40th-ranked player in fantasy basketball on average stats this season. In total stats, he’s outside the top 125. Bradley Beal’s positive categories are points, assists, field goal percentage, and free throw percentage. The two categories he’ll definitely not help you in are rebounds and turnovers. What should you offer up to attend Bradley Beal’s services? I’d suggest picking a sexy name in that 75-100 range. Some examples of fantasy basketball assets I’d move one-for-one for Bradley Beal would be Ja Morant and Franz Wagner. Ja Morant plays with reckless abandon so he’d be an injury risk as well. Furthermore, for fantasy basketball, Morant’s only a plus in points and assists. Franz Wagner is a great young player, but doesn’t dazzle in any one specific category.

De’Anthony Melton has had a super strange season. He was awesome to start the year. It certainly helped when Harden and Maxey missed time. They are healthy now and Melton is also just in a funk. Over the last two weeks, he’s averaging only 6.7PPG while shooting under 37% from the field. We know Melton’s going to be a guy that negatively impacts these categories. The hope is they come back up especially the points so that’s not a forced punt situation.

For the season Melton’s just inside the top 50. He’s been largely a fantasy basketball cheat code for steals which he averages 1.9 per game. When he’s rolling and getting touches he’s been helpful for threes as well. Plus it doesn’t hurt he’s a low-turnover player. If one of Maxey or Harden misses again, Melton’s fantasy basketball value should climb back up again. I’m seeing De’Anthony Melton get dropped in some leagues so it probably won’t take a top-100 fantasy basketball asset to obtain him at this point.

Believe it or not but Gary Trent has been a first-round fantasy basketball player over the last month. This isn’t sustainable. His stats are inflated across the board. When he struggled out of the gate my advice was to buy because I thought he’d see positive regression to the mean. And now for the season, his fantasy basketball value is almost identical to last season. Trent’s strongest category is steals, but he’s also a nice threes guy. He’ll typically hurt you in blocks, field percentage, rebounds, and assists.

If you can sell high on Trent’s hot month you gotta do it. Ideally, I’d try to flip him for a fantasy basketball asset in the 20-30 range. However, I think Gary Trent is a real-life trade candidate for the Toronto Raptors as they look like a possible tank team. In another situation, I highly doubt Trent would get those high Nick Nurse minutes. So if you can get roughly a top 40 player I would consider settling for that. Some suggestions in a one-for-one could be Desmond Bane, Jaylen Brown, or Mikal Bridges.

The Bulls are currently at a crossword hanging onto a play-in spot. Nikola Vucevic continues to be a stud for 9-cat fantasy basketball leagues. On the season he’s been a top-25 guy. Vucevic’s best category by far is rebounds in which he averages 11.2 per game. He doesn’t really hurt you anywhere outside of steals where he only averages 0.7. Vucevic has been a first-round fantasy basketball player twice in his career (18-19 & 20-21). Last season, his value ended up being in the third round for fantasy basketball leagues. What’s changed? In Chicago, we’ve seen Vucevic’s scoring and assists dip. Playing with DeRozan and LaVine who are ball-dominant players hasn’t helped Vooch for fantasy basketball. He’s also older and slower which isn’t a good sign for a game that’s gotten more fast-paced.

Nikola Vucevic isn’t a terrible NBA player, but he’s no longer a great one. If the Bulls are trying to chase a playoff spot will they try to upgrade at that center position? Or could they attempt to tank and just unload Vucevic’s expiring contract? His situation is really in question. In fantasy basketball, I like to avoid question marks to minimize risk. You shouldn’t just give Nikola Vucevic away, but if you can swap him for another top-25 fantasy basketball commodity I’d consider it.

What fantasy basketball trades are you pondering?

Fantrax was one of the fastest-growing fantasy sites over the last few years, and we’re not stopping now. We are the most customizable, easy-to-use, and feature-rich platform in the industry, offering the greatest fantasy experience for your dynasty, keeper, redraft, and best ball leagues. Fantasy sports doesn’t sleep, and neither does Fantrax, with seasons running 365 days a year. Take your fantasy leagues to the next level now at Fantrax.com!
NBA Buy Low Targets
Share