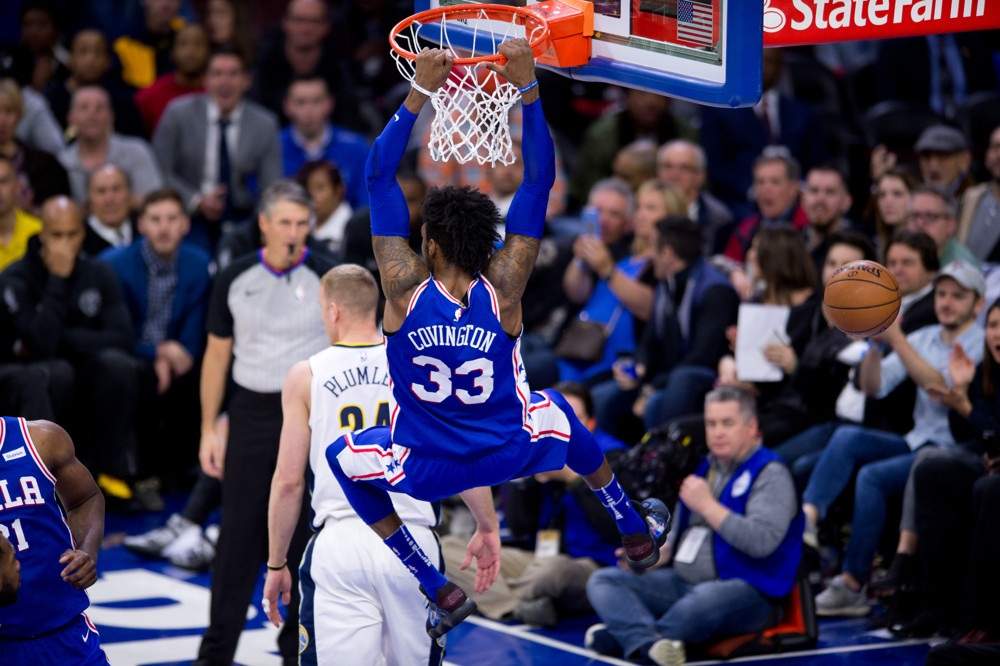 Robert Covington was traded from the Philadelphia 76ers to the Minnesota Timberwolves, basically replacing Jimmy Butler in the rotation. Since joining the Timberwolves, they have a 9-and-5 record, largely due to what Covington has brought to the team. He is a real perimeter threat on both ends of the floor, something the Timberwolves have been lacking for some time. The transition has been a seamless one and has clearly benefitted the players around him, both as individuals and as a team.

Covington is the 17th ranked player in nine-category leagues which may come as quite a shock to many people. The numbers provided here, however, demonstrate the improvements he has made since being traded. Across those 12 games, he is the 10th ranked player, higher even than his teammate Karl-Anthony Towns. The playing time is going to be there on a nightly basis given coach Tom Thibodeau’s historical rotation policy.

Covington’s fantasy value is heavily weighted toward his numbers on the defensive end of the floor. During his 12 games with the Timberwolves, Covington is leading the league with 2.6 steals per game. He also leads the league in deflections and provides solid block numbers from the small forward position. While it may seem unrealistic to expect 2.6 steals moving forward, Covington has shown across his career that he is capable of these kinds of numbers. The fact he is able to guard multiple positions also ensures opponents find it tough to get a good read on his game. The steals may not hold at 2.6 per game but his season average of 2.2 is well within reach.

As well as providing perimeter defense, Covington is a consistent threat on the offensive end. The Timberwolves have been lacking a real three-point threat for a number of seasons despite the clear move toward that style of play. Towns is currently the team’s best three-point shooter which is concerning given his abilities inside the paint. The addition of Covington and Dario Saric allow Towns to work in the post, where he is able to dominate most opposing centers. That fact alone ensures Covington is likely to continue taking multiple threes on a nightly basis.

During his first 13 games of the season for the 76ers, Covington was assisted on every single three-point make. He was also assisted on 90 percent of his two-point makes, a clear reliance on others to get him the ball in scoring position. Since joining the Timberwolves those numbers have dropped considerably. He is now assisted on just 83 percent of his three-pointers and 69 percent of his two-pointers. This has been a big change to his offensive skill set and a clear indication that he does have the ability to create his own shot. That makes him more of a threat with the ball in his hands and creates space for those around him.

Covington also seems to have found his rhythm from the free-throw line where he had been struggling to begin the season. After shooting 85 percent in 2017-18, he was down to 74 percent before the trade. He has managed to kick that back up to 84 percent in Minnesota, all while attempting almost 50 percent more free-throws per game.

Finally, Covington’s ability to provide out-of-position rebounds only adds to his overall fantasy value. That number has jumped from 5.2 to 6.0 per game. While all of his numbers have increased over the past 12 games, his turnover rate has dipped to a career-low 1.2 per game. This comes despite an extra one minute of playing time and a bump in his usage rate, from 14.3 to 15.7.

On the whole, Covington has not made any significant changes to his game but has managed to increase across the board. That is a great sign that his game is maturing as he enters his prime, leaving little doubt that the production will hold. Unlike players who are having breakout seasons due to an increase in playing time, Covington is bucking that trend. His role remains the same, however, he is able to adapt his game while also working on his strengths. A top 10 finish to the season seems unlikely but the second round is completely feasible. The Timberwolves are likely to be fighting for a spot in the playoffs which should ensure Covington is playing big minutes on a nightly basis.

Got a question about this week’s fantasy basketball player spotlight? Hit Adam up on twitter @adamking91 or give a shout out to @Fantrax