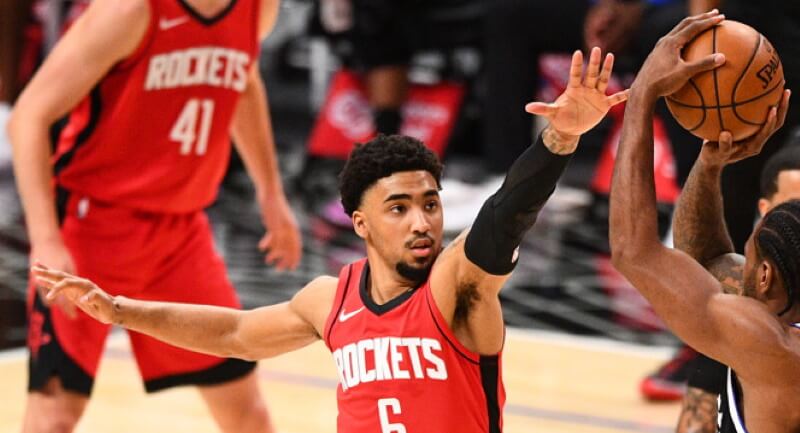 At this point in the season, there are no surprises. However, Fantasy Basketball rookies provide one last gasp of production to carry your team to the promised land. Often inconsistent, rookies come out of nowhere in the final week and put up monster lines against teams planning their vacations to Cabo. While the top echelon rookies like LaMelo Ball and Anthony Edwards are permanent fixtures on teams in all leagues, other rookies no matter how productive may find themselves on the waiver wire as teams maneuver and nuance their lineups during competition.

The following is a list of productive rookies that can boost your final run for a championship. As team needs dictate, stream these rookies to supplement your strengths and smooth out your rough edges.

Timing can be a beautiful thing. After missing a few games, Jae’Sean Tate might have been dropped from a team’s roster to your waiver wire. Tate has been great for the short-handed Rockets, averaging 13.6 points, 5.4 rebounds, 3 assists, 2 steals, on 51% shooting from the field. Even if it’s for a game or two, Tate can put up a huge line and give you a great floor in elite steals.

Saddiq Bey’s last two games have been poor which might have landed him on your waiver wire. Bey is in line for big minutes and increased usage to end the season. Bey offers immense upside across the board and is elite in threes (3 per game) and rebounds (8 per game) from the small forward position the last two weeks.

Isaiah Stewart looked primed to end the season on a tear but has cooled down considerably in the past week. However, Stewart remains a sneaky play to bolster your rebounds, field goal percentage, and flip the block category in head-to-head matchups.

For as long as Christian Wood is out, Kenyon Martin Jr. is worth streaming. If additional players are out, like Jae’Sean Tate or Kevin Porter, Martin becomes nightmare fuel for opponents in the final week. During the last week with the players above out, Martin is averaging 19.5 points, 2.3 threes, 8 rebounds, 3.3 assists, 1 block, on 54% field goal percentage. With four games next week, give Kenyon Martin a look to round out your production.

Facundo Campazzo has been a hot pickup lately. Rightly so. In the past two weeks, he has averaged 7.3 assists and 2.4 steals per game. While he won’t contribute consistently to other categories, he is worth rostering for his assists and steals alone.

Theo Maledon offers value in deeper leagues, especially as a cheap producer of assists. If you can stomach the inconsistent play and low field goal percentage, Maledon can give you an edge in assists (4 per game) and throw in some steals (1 per game).

Payton Pritchard is a name to watch in deeper leagues when Jayson Tatum and Kemba Walker sit. If they do sit, look for Pritchard to produce points, threes, and assists. If Tatum or Walker are playing, it is safe to keep Pritchard on the waiver wire.

Isaac Okoro is playing big minutes for Cleveland. Okoro has averaged 15 points over the past two weeks making him a helpful addition with four games next week. While more of a streamer in 12 or 14 team leagues, points are difficult to find on the waiver wire.

Cole Anthony should be on a roster. However, his inconsistent minutes might have landed him on the wire. If so, go ahead and grab him for your final championship push. Anthony has four games next week and has been producing when given the minutes. Expect averages around 15 points, 4 rebounds, 5 assists down the stretch.

R.J. Hampton’s minutes have crept up to around 30 per game. As the “future” of the magic, expect Hampton to get even more to finish the season. In the last week, Hampton averages 17 points, 7 rebounds, and 6 assists on 46% shooting. If you need guard play, Hampton is a great option to end the season.