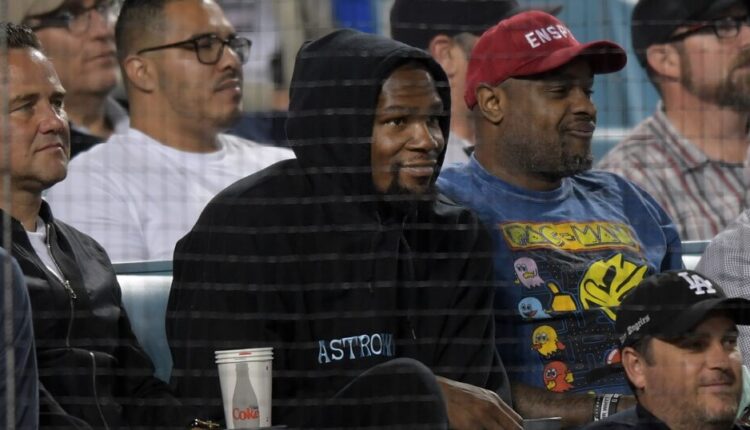 Another week into this chaotic NBA season and the number of players missing games continues to rise. For many players, their absences can easily be explained by an injury. For others, however, the situation has proven to be a bit messy.

Not as strange as Kevin Durant‘s situation though, in which he initially started Friday’s game on the bench because of covid protocols, then was cleared to play about 7 minutes into the first quarter, only to once again be pulled from the contest for health and safety protocols in the middle of the third quarter.

Needless to say, player absences are a bit more unpredictable this season than in years past. With that, many players who normally wouldn’t get the chance, are being given an opportunity to show what they can do in extended minutes, hopefully helping your fantasy team in the process. So let’s take a look at some guys who are trending up as a result of their teammates missing time due to injury, health and safety protocols, or any other reason.

Russell left Monday’s game with left leg soreness after playing just six minutes. He had missed the previous game with a quad injury, so it is entirely possible he misses some more time in order to get back to 100%. With Karl-Anthony Towns also still out as he recovers from COVID-19, Minnesota is in desperate need of offense every time neither of them suit up.

Beasley has been spectacular as the top scoring option for the Timberwolves of late, averaging 22.5 points, 5.8 rebounds, and 3.9 threes per game in the last two weeks. He filled the stat sheet on Monday after Russell left the game, exploding for 30 points, 9 boards, 6 assists, a steal, a block, and 6 threes in a tough loss to Dallas. His legal issues aside, Beasley is trending up on the court, and he should be a strong contributor to fantasy teams the rest of the season, especially when Russell, Towns, or anyone else is forced to miss time.

The first overall pick in the NBA draft has shown flashes of greatness at various times this season, but the absence of Russell for most of the last two games has given the rookie a chance to shine. Edwards has been trending up with 20+ points in each of the last two games, putting up a 26.2% usage rate, a number equivalent to offensive workhorses such as James Harden, Zion Williamson, and Jimmy Butler. As long as Russell remains out, it appears that the 19-year-old will have plenty of opportunity to run the offense along with Beasley.

G Ricky Rubio should also benefit from any time missed by Russell, as he will likely see around 30 minutes per game, providing strong assists and steals while seeing extended minutes. Second-year G Jaylen Nowell could also be a beneficiary here, having scored in double figures in each of his last eight games. He has yet to top 23 minutes in a game, however, so his upside is limited until Coach Saunders entrusts him with more time on the floor.

The former all-star guard has reportedly tested positive for coronavirus, meaning he will likely miss at least the next two weeks. The timing is unfortunate for Holiday, who seemed to be finding a groove with his new team, averaging 17.1 points, 5.9 boards, 5.9 dimes, and 2 steals per game on an efficient 52% from the field in the last two weeks. He will hopefully be back on the court as soon as he’s eligible, so he can pick up right where he left off.

The third-year guard could be in for a nice boost in performance, now as the top healthy guard on the Bucks. With Holiday out of the lineup on Monday, DiVincenzo topped 30 minutes for just the third time this season, while also putting up the third-highest usage rate on the team after Giannis Antetokounmpo and Khris Middleton. The 24-year-old is more than capable of putting up some solid across-the-board production when his offensive involvement trends up, and it seems this will be the case for the next couple of weeks.

G Bryn Forbes played a season-high 26 minutes on Monday night, scoring an efficient 15 points while knocking down 3 threes. He doesn’t do much outside of points and threes, but he should excel in those categories assuming his minutes keep trending up. G,F Khris Middleton could see a slight boost in overall production as well. Already arguably a top 25 player in the league, this won’t impact his value too much, but he did put up a career-high 12 assists Monday and could take advantage of now being the primary playmaker on Milwaukee.

After suffering a right shoulder sprain, Markkanen is expected to miss 2-4 weeks. The young big man was just starting to really get going offensively, scoring 31 and 30 with 6 threes in each game, just two games before coming down with the injury. With Wendell Carter still out with a quad injury, the Bulls’ frontcourt will be extremely thin over the next few weeks.

After missing a few games due to lower back spasms, Porter is now being shut down so he can heal properly. Back injuries can be tricky, so there is no real timetable as to when the former Georgetown standout will be back. As stated above, the Bulls frontcourt is extremely thin right now, giving fantasy value to just about any healthy body they have.

Simply put, Young has found the fountain of youth. The 32-year-old has taken full advantage of Chicago’s lack of frontcourt depth and has surged back into fantasy relevance. Over the last two weeks, the veteran is averaging 13.3 points, 6.3 rebounds, 6 assists, 2 steals, and 0.8 blocks on 59.7% shooting from the floor. His 59% shooting on the season was already the best of his long career, but now he has kept up the high efficiency as his minutes and shot attempts have also risen. Young should get all the minutes he can handle right now and should be considered a must-start in all fantasy formats.

The rookie out of Florida State has shown a lot of potential thus far and is now really beginning to show what he can do in extended minutes. Having played 32+ minutes in each of the team’s last four games, Williams has produced, scoring a career-high 20 points with 7 boards on Friday. He followed that strong performance with another on Saturday, scoring 16 points with 1o rebounds for his first career double-double. With their frontcourt decimated and the team beginning to fall out of playoff contention, the Bulls have no reason not to let the fourth overall pick flourish. He should continue trending in the right direction as the season progresses.

Wood is being listed as week-to-week after suffering a right ankle sprain. Awful news for the NBA’s likely favorite to win most improved player of the year, and everyone’s favorite breakout star in fantasy basketball. The 25-year-old, on his sixth team in six years, has been nothing short of dominant this season, averaging 22 points, 10.2 rebounds, 1.5 blocks, and 1.9 threes per game on 55.8% shooting. Hopefully, the breakout center will be back soon, but he could realistically miss a month or more.

The former all-star will fill in as the starting center for the Rockets until Wood returns. Cousins has been terrific on a per-minute basis this season, and he has even averaged 13.6 points and 12.8 rebounds per game when inserted into the starting lineup this year. The team has capped him at 30 minutes per game for now, but that is still more than enough time for Boogie to make his presence felt both on the court and in the box score. Perhaps the minutes restriction will ease up as he gets acclimated to this workload, in which case the sky would be the limit in terms of fantasy production.

After initially being thought to be a fairly minor knee ailment, Hunter has now undergone meniscus surgery on his right knee. He is set to miss 7-10 weeks, which would bring him back to action in time for the stretch run and fantasy basketball playoffs, assuming no major setbacks. This unfortunate news puts Hunter’s breakout season on hold, but there are plenty of Hawks who could continue to trend up during his absence. As discussed in last week’s article, John Collins has seen a strong bump in usage and production, averaging 23.7 points and 8.7 rebounds per game since Hunter went down. These numbers are much closer to the 21.6 points and 10.1 boards he averaged last season, and there is no reason why this elite production shouldn’t continue.

Some other names were discussed as possible beneficiaries from Hunter’s absence, and Kevin Huerter has shown to be another big winner thus far. Now getting over 35 minutes per game, the third-year wing has put up averages of 18.7 points, 3 rebounds, 5 assists, 1.7 steals, and 3.7 three-pointers per game since the recent surge in playing time. He should remain a strong fantasy option for as long as Hunter is out.

For more help adding to your fantasy basketball squad head on over to our Fantasy Basketball Waiver Wire.