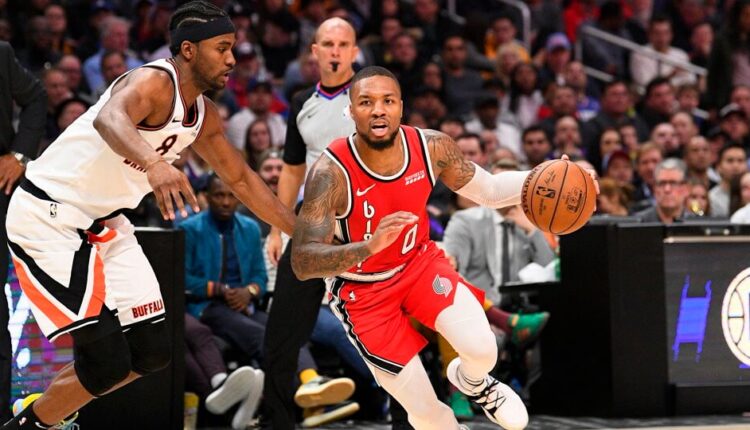 Welcome to another round-up of the most impactful fantasy basketball injury news from the previous week. As usual, the news will be paired with actionable fantasy advice that will hopefully help get you one over your league mates. This week’s edition will include updates on NBA stars Joel Embiid, Damian Lillard, and Paul George among others. For advice on Kahwi Leonard, you can read the round-up from week 5.

George left last Saturday’s game with knee soreness and has been diagnosed with a hamstring tendon strain since. No official timeline has been given by the Clippers. The injury itself, historically, could mean a period of rest of days up to months. While there has been no indication of the injury being too serious, an extended break for George wouldn’t be a surprise either. While George (and Kawhi Leonard) are out, look towards second-tier Clippers players: Morris, Jackson, Powell, and Mann. Terance Mann, in particular, seems to have slid into George’s role quite nicely.

Recommendation: Terance Mann is the man for now.

Embiid has been diagnosed with a mid-foot sprain on his left foot. The injury, on average, has meant about a month of absence from basketball. Luckily, this is not the foot with an injury history on Embiid. With seemingly half the Sixers roster injured, look towards the reserves to fill the stat sheet. Shake Milton and De’Anthony Melton led the team in scoring in their last game. Tyrese Maxey and James Harden aren’t expected to play any time soon either.

Lillard has been diagnosed with a grade one strain to the soleus muscle in the right lower leg. He will be re-evaluated in one to two weeks. Considering the player’s age and injury history, I’d expect an absence on the longer end of the projection. While Lillard is gone, Anfernee Simons will take the reigns over the Blazers’ offense. Shaedon Sharpe could play himself into relevance for deeper leagues though, just as likely, Lillard’s minutes could be spread evenly among Sharpe, Justise Winslow, and Nassir Little making none of them relevant in most fantasy leagues.

Recommendation: Keep an eye on the situation.

The #1 overall draft pick, Banchero, seems to be finally returning to the Magic after missing the last 7 games with an ankle sprain. Before the injury, he ranked around the top 60 in 8-cat leagues and the top 100 in 9-cat leagues. Banchero might take a game or two to return to form but he is expected to take the role of the #1 option on the Magic. That would mean a hit to the minutes and/or offensive usage of multiple players on the roster – Franz Wagner, Bol Bol, Chuma Okeke, and Jalen Suggs.

Recommendation: Okeke should be safe to drop in most leagues.

Rumblings out of Beantown indicate that Williams is expected to return to NBA action by Christmas. He is currently out recovering from knee surgery. The impact he could have upon returning can’t be understated. In 2021-22, I had him as the 12th-best player in 9-cat leagues due to excellent blocking, field goal, and rebounding numbers. It would take a while to get going again but if it all goes well Williams will be rolling by the fantasy playoffs.

Recommendation: Surely Williams isn’t on the waivers in your league. Could be pertinent to look to cash in on Al Horford on the trade market.

Fantrax was one of the fastest-growing fantasy sites over the last few years, and we’re not stopping now. We are the most customizable, easy-to-use, and feature-rich platform in the industry, offering the greatest fantasy experience for your dynasty, keeper, redraft, and best ball leagues. Fantasy sports doesn’t sleep, and neither does Fantrax, with seasons running 365 days a year. Take your fantasy leagues to the next level now at Fantrax.com!
NBA Injury Update
Share