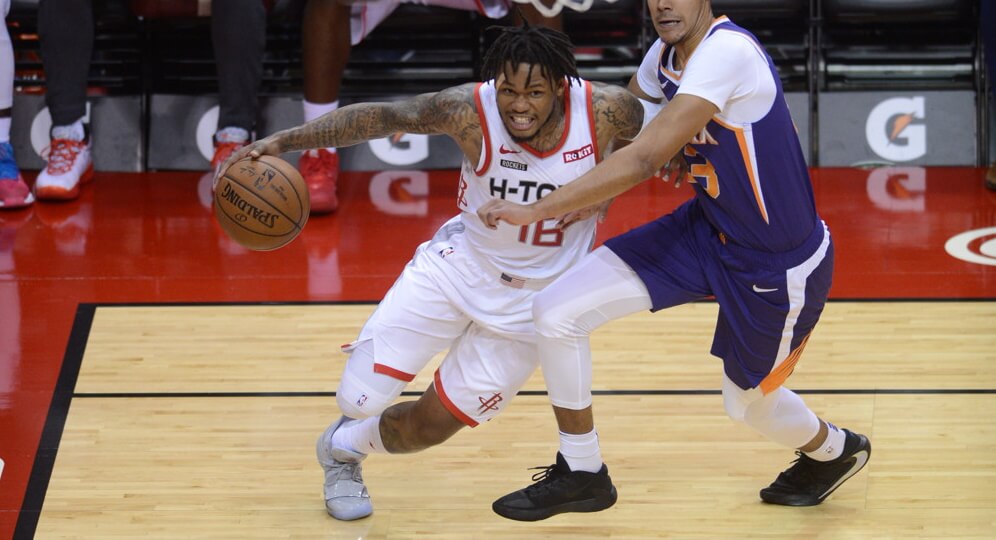 When it comes to fantasy basketball, there is an abundance of opinions available from multiple sources. As a way of collating those opinions, the Industry PRO/ject series was born. Every few weeks, I will join an elite company, garnering opinions on a range of fantasy basketball topics. The purpose of this series is both to entertain and educate, as well as giving you, the reader, a chance to agree or disagree.

In this edition of the Industry PRO/ject, I asked the analysts which fringe player could make a difference during the fantasy playoffs. Upon reading, you will notice a couple of inconsistencies. That is simply a result of collating these over a seven-day period.

What?! You’re not hosting your fantasy basketball league on Fantrax? Inconceivable!! Check out all the features of Fantrax Fantasy Basketball Commissioner. We’re pretty sure you’ll come around to our way of thinking.

Bruce Brown – Adam asked for a fringe 12-teamer that might make a huge fantasy impact. I know I’m veering off course a bit, since Brown has been above fringe status lately. However, he strikes me as a guy that got dropped in a lot of spots with the somewhat nebulous nature of his leg injury. With many playoffs starting next week (but even more beginning on the 16th) he strikes me as someone that likely gets back in the fantasy picture. He could ramp up his workload JUST in time to be a huge impact guy on a team with very few options. You could also toss Brandon Knight in there as an honorable mention on this chat. I simply don’t believe Luke Kennard and Derrick Rose are healthy enough to matter. This thrusts these two Pistons to the front of the photo.

Cam Johnson – Once again, Deandre Ayton is dealing with an ankle injury. He has missed the last two games and was seen leaving Tuesday’s game on crutches. The Suns are fading from the playoff race. Hence, they don’t have much motivation to rush their star center back from his third sprained ankle of the season. Even though it’s been Aron Baynes who has benefitted the most from Ayton’s previous missed games, I think it could be Cam Johnson who steps up this time. On Tuesday, he played 33 minutes and closed out the game in place of Ayton, while Baynes never got off the bench and played 0 minutes. Johnson ended up scoring 21 points with five threes and pulled down four rebounds.

Cam Johnson – The Suns’ season is spluttering and limping to a somewhat predictable mediocre finish. Kelly Oubre is done – whether the Suns officially admit it or not – which means there is zero reason to not throw their 24 year old rookie Cam Johnson 30+ minutes the rest of the way. Over his last 10 games he’s averaged 22.7 minutes, producing 10.1 points, 2.2 rebounds, 1.5 assists and 45/80 shooting splits. Quite pedestrian numbers, but it’s the 2.5 threes (45%) and 1.2 steals, with just 0.5 turnovers that will help your playoff run. His game against the starchy Toronto Raptors was easily his best, as he played a career-high 33 minutes. He responded to Oubre’s absence admirably, racking up his career high in points (21), field goals (7-16), threes (5-13) and blocks (3). The blocks are an anomaly, but over the 11 game H2H playoff run the Suns have (starting 16 March), expect Johnson to produce at a Duncan Robinson-type level from three, which can win you the category.

Brandon Knight – Around this time of the fantasy year, matchups tend to feel the effects of out of nowhere players coming in and putting up huge numbers. The obvious place to look for these gems are on teams soon to be out of the playoffs. Combine that with injuries or “injuries”, and you can pinpoint some potential fantasy gold. I looked to Detroit, and after hearing about Rose’s injury status (along with Kennard), Brandon Knight, hero of 2014-15, is set to soak up major minutes and usage. His efficiency from the field will certainly not help. However, to grab a player off of waivers that can possibly get you 20/5/4 with a couple of threes, is a huge boom for your squad.

Juancho Hernangomez – He’s not a fringe 12-team option to me, but he’s still available in 52 percent of Fantrax leagues, so I’ll select Juancho Hernangomez as my guy. He’s locked into the starting power forward job for a Timberwolves team that has played at the second-fastest pace in the league. The result has been him averaging 14 points, 6.9 rebounds and 2.2 three-pointers while shooting 46.6 percent from the field entering play Wednesday. The Timberwolves play three times each in Weeks 21 and 23. Add to that, four times in Week 22, and Hernangomez should have plenty of opportunities to be productive.

Dewayne Dedmon – He’s available in 52 percent of Fantrax leagues and 63 percent of Yahoo leagues. Since being dealt to Atlanta, he’s been the 89th-ranked player on a per-game basis in just 22.4 minutes. He’s provided great block numbers (1.7), but his rebounding (7.1) and swiping (1.1 STL) have also been positives. Even if Clint Capela (foot/heel) returns this season, it’s hard for me to believe that the Hawks will give Dedmon fewer than 20 minutes on a consistent basis. He allows Atlanta to move into five-out offense while still having a viable rim protector. The team is an absurd 12.0 points better per 100 possessions with Dedmon on the floor.

Elfrid Payton – As someone who plays in mostly H2H 9-Cat Fantasy Basketball leagues, I’m going to go with Elfrid Payton. This guy was someone that I picked up off of nearly every waiver wire a month ago. His stat-stuffing ability has been a huge boost to my teams. In fact, he’s averaging 11.1 points, 5.6 rebounds, 9.2 assists and 1.8 steals over his last 18 games played. Not many waiver wire guys can provide numbers like that. He is a great pick-up if you’re in good shape with 3PM because his low percentages aren’t really a big deal with his low shot/FT totals.

Derrick White – The Spurs are just about cooked. They are currently the 12-seed in the West and are four games back of the eighth-seeded Grizzlies. One more losing streak, and it will be time to focus on ping pong balls. Once the Spurs are eliminated, there’s a decent chance that we finally get an extended look at Dejounte Murray/Derrick White lineups. Popovich has been hesitant to roll with this combination because of the spacing issues created by Murray and DeMar DeRozan. But, with nothing to play for, you have to imagine that he starts to give Murray/White lineups a little more run.

I doubt White starts seeing 30+ minutes down the stretch, but he could flirt with the top-50 in a 28 minute role. The Spur has been a top-85 player over the last month in only 24.1 minutes. I like White because what he brings to the table is unique. It is almost impossible to find useful assists that are accompanied by a block per game. In a high-20s role, White would likely be able to average 4.0+ APG and 1.0 BPG. He would be especially valuable to a punt threes team as he does most of his damage from inside of the arc. The Spurs’ upcoming schedule enhances White’s value. The lottery-bound squad is one of only three teams that play four games during both Week 22 and Week 23.

James Johnson – The Timberwolves are more than likely, not going to feature in the playoffs. Moving forward, they will want to have a look at their roster and how it translates to wins next season. Johnson could be a player they view as part of their future. He has the ability to defend multiple positions while offering a scoring option both inside and outside the painted area. You might even consider him a watered-down version of Robert Covington.

Over the past month, Johnson has been a top-80 player in standard leagues. This comes in only 24 minutes per game, a number that certainly seems sustainable. He has a proven ability to contribute on both ends of the floor and this typically translates very well for fantasy basketball. His upside is limited due to his bench role, however, his across the board productions lends itself to value no matter the stats you might be chasing.

Jordan McRae – The fantasy basketball playoffs are right around the corner for those who compete in head-to-head leagues. If you have already secured your spot or locked in the bye, then you are likely scouring the waiver wire looking for difference makers who have been injured or flying under the radar.

I have been lucky enough to secure a playoff spot in most of my leagues. I have been taking fliers on a player who found himself a new home, Jordan McRae. McRae was a popular waiver wire add earlier in the season when playing for the Wizards. He was typically phenomenal when given minutes. McRae appeared in 29 games for the Wizards this season and averaged 22.9 minutes per game. He was then traded to the Nuggets where he barely sniffed the court. His per-36 numbers before leaving the Wizards pops off of the page with 20.4 points, 4.5 assists, 5.7 rebounds, 2.2 treys and one steal on 42 percent shooting from the floor. Now, most of these numbers were influenced by an increase in usage with Bradley Beal being off of the court. However, this leads us directly into McRae’s new venture.

McRae gets another chance to be relevant after agreeing to join the Pistons, who are desperate for a point guard. He was thrust into decent minutes in his first game on his new squad. He played 26 minutes and was not shy, shooting 5-of-11 from the field for 15 points with three assists and two rebounds. His new home in Detroit is not much different than it was when playing for the Bradley Beal-less Wizards. Derrick Rose and Luke Kennard are the Pistons with the longest tenure and highest usage. However, Rose is expected to miss a significant length of time and Kennard still needs another week before being re-evaluated. Therefore, McRae is stepping into another spot where he should be seeing solid minutes. This could lead to plenty of opportunity to chuck as many shots as he would like to.

The opportunity is there for McRae and he could be a difference-maker flying under the radar on your waiver wire.

Is Adam on the money with his Industry PRO/ject piece? Let him know in the comments below! Also, check out our Seven-Day Player Rankings and  2019-20 Fantasy Basketball Schedule Grid.