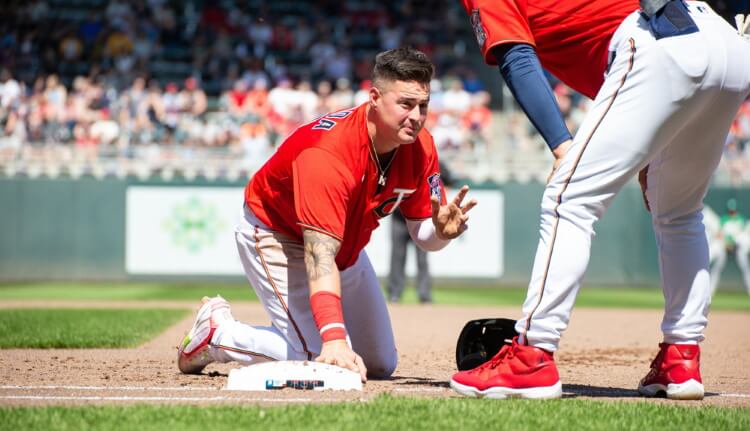 Another week, another Fantasy Baseball Waiver Wire report here on FantraxHQ. Regardless of what style league you play in and what point of the season it is, we should always be looking to improve our fantasy teams. Whether you’re looking to catch the next red hot breakout, find an injury replacement, or improve in a specific statistical category, the waiver wire can help you accomplish all of those. This week’s report features a lot of intriguing arms, a big SB threat, an undervalued veteran, and two surging young bats.

Indulge me for a minute as I start this week’s article with a question. What does Jose Miranda have to do to receive more love in fantasy circles? Sure, the beginning of his Major League career was underwhelming. How dare he take time to transition to the highest level of baseball in the world! When Miranda took the field on May 26th, he was slashing a measly .143/.184/.252 in his first 66 plate appearances. Since then, Miranda’s slash line sits at a stellar .343/.383/.579 in 149 PA with eight homers, 32 RBI, and 18 runs scored.

It’s not like Miranda appeared out of thin air either. This is a career .281 minor league hitter that broke out in 2021 to the tune of a .344/.401/.572 line in the upper minors with 32 doubles and 30 home runs in 127 games. He’s already demonstrating solid plate discipline with a 19.5% strikeout rate, 21.7% whiff rate, and 86.9% zone contact rate, and has recorded a 46.8% hard-hit rate since May 26th. With Minnesota finally treating him as a full-time starter, Miranda’s roster rate needs to skyrocket thanks to his four-category contribution.

We go from an underrated rookie in Miranda to an always underrated veteran in Kolten Wong. For the most part, injuries have limited Wong sporadically throughout his career and is one of the leading reasons why I’m able to write about him in an article like this once or twice each season. In 2022, Wong is having a very Wong-like season, pacing at around 13 home runs, 18 steals, and 80 runs scored with his usual solid plate approach. However, Wong missed three weeks in June, a month where he underperformed as well, which led many to drop him in 12-team leagues or less. In the month of July, Wong has scored 14 runs in 78 PA with a pair of homers and a pair of steals. He’s certainly worth a look if you need a second baseman or middle infielder right now.

The case of Alec Bohm is a curious one. In 2022, he’s hit well overall and now has an AVG pushing .300, but the power just hasn’t been there. Bohm has above-average to plus raw power, but he’s always been limited by a heavy groundball approach while I don’t see changing this season. But with that said, picking up Bohm can help you in AVG, runs , and RBI, with Bohm pacing at around 75 for each. This is the type of pickup you make if you’re looking for a stable corner infielder that won’t hurt you overall. If you’re doing well in power and speed, areas where Bohm lacks, he could be a solid addition for his contributions in AVG, R, and RBI.

As I’ve mentioned before, sometimes your waiver wire targets are to help in a specific category. Not every addition can be a sexy league-winner. That’s exactly the case here with Jorge Mateo. Entering games on Thursday, Mateo ranked 2nd in baseball with 24 steals, putting him on pace for over 40 this season. He’s only been able to muster a .216 average to go with that, but those steals are highly valuable and can make a difference over the remainder of the season. And it’s not like he’s a zero in the other departments. Mateo has eight home runs, 26 RBI, and 37 runs scored as well. Grab him for his speed and consider any offensive contributions as a bonus.

It’s safe to say that more than a few managers panic dropped Kirby before the all-star break when he was optioned to Triple-A Tacoma. That’s what we like to call a massive mistake. That “demotion” was simply to manage his innings a little around the all-star break and had nothing to do with Kirby’s performance, which has been rock-solid for a rookie arm facing Major League hitters for the first time. After tossing five shutout innings on Tuesday, Kirby lowered his ERA to 3.50 to go along with a 1.20 WHIP, and 22,7% strikeout rate. His stellar command and control have translated to the Majors as well, and Kirby currently sports a tiny 2.4% walk rate. And if you take out that one 7 ER blowup last month, Kirby would have a 1.98 ERA in 45.1 innings dating back to his late-May start against Baltimore.

With the trade deadline looming in a few days, who knows what uniform Cole Irvin will be donning next week. But in the fantasy world, he needs to be rostered in more leagues with how he’s pitching lately. In the month of July, he’s rattled off five consecutive quality starts with three of those coming against the Houston Astros. In those five starts, Irvin has allowed only seven earned runs in 34 innings with three walks and 22 strikeouts. He’s never been one to post gaudy whiff or strikeout rates, and likely never will be. But five straight quality starts are certainly notable and Irvin is now down to a 3.05 ERA and 1.04 WHIP for the season. Even with some regression, a 3.50/1.10 pitcher is still valuable moving forward.

In general, I try not to double-dip only a few weeks apart, but I needed to here with Detmers. It’s hard not to with how he’s been pitching in the month of July. Detmers has faced Atlanta, Houston, and the surging Baltimore Orioles in his three starts this month, allowing only two runs in 17 innings with 19 strikeouts. Overall, that’s a 1.06 ERA, 0.94 WHIP, and 29.2% strikeout rate. He’s been using an altered pitch mix this month, throwing the slider more and changeup less which seems to be working well for him. The slider has been lethal over this three-start stretch, recording a .120 BAA, .120 SLG, and .151 wOBA.  Detmers is starting to flash his strikeout upside more of late as well with all four of his offerings having a whiff rate above 23% in July. It feels like we’re in for a nice second half from the sophomore southpaw.

it’s taken some time, but Alex Cobb’s surface stats are slowly beginning to inch closer to where they probably should be given his underlying metrics. Since the beginning of June, Cobb has recorded a 2.84 ERA, 1.17 WHIP, and a 3.25 FIP. You have to love seeing the ratios come down, but Cobb’s strikeout rate has dropped to just 16.8% over this stretch after being in the 25% range for most of the season. I’m not overly worried about that dip though. Cobb has the stuff to tick back up over 20% and his metrics have hinted at him lowering his ratios for a while now. This performance since the beginning of June is very legit and Cobb needs to be rostered in all 12+ team leagues right now and maybe some deeper 10s too.