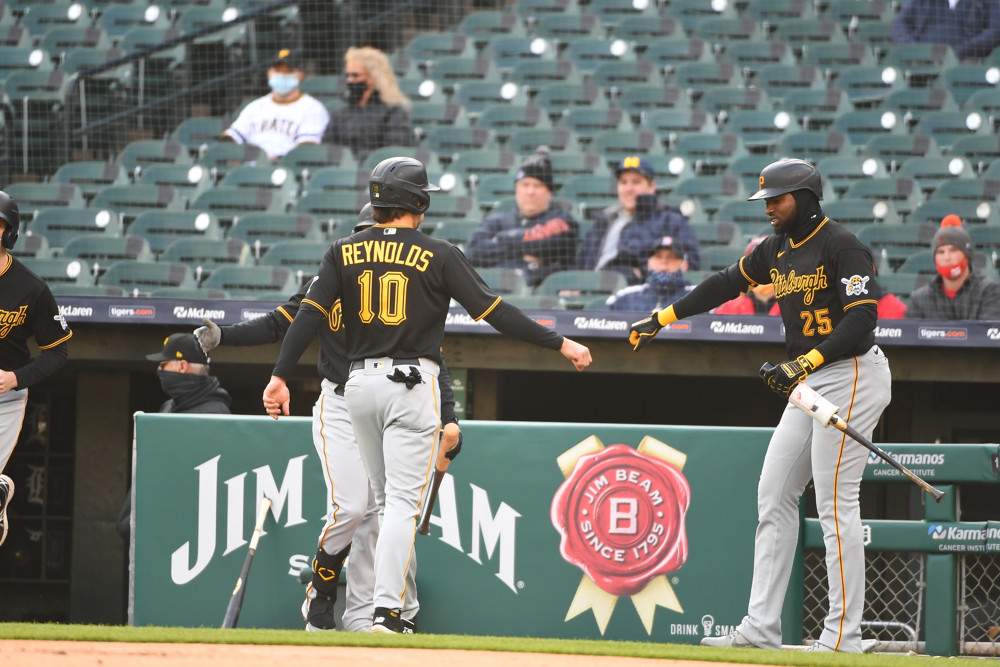 While it’s great to have a full 162-game season, we’re still dealing with plenty of postponements, COVID issues, and injuries. If you’ve got a horseshoe or rabbit’s foot somewhere and have avoided all of those, I’d recommend buying a lottery ticket because you’re one lucky you know what. But the other 99.9% of us have had to fill the voids on our team by hitting the waiver wire each week. This week’s fantasy baseball waiver wire report is a mix of new faces, old faces, and several players from a team you might not have expected. Well, the title kind of gave it away, but still.

With Cody Bellinger nowhere close to a return following a hairline fracture in his leg, Zach McKinstry is in line to continue playing every day and that’s very appealing for fantasy purposes. It doesn’t help that McKinstry was scratched yesterday with back stiffness but it doesn’t sound serious. McKinstry has been performing at a high level this season and really hasn’t stopped hitting since the 2019 season began. After a rough 2016 and 2017, McKinstry hit .282 with a .403 OBP in 2018 and really broke out in 2019 with a .300/.366/.516 slash line, 19 home runs, and eight steals in 121 games.

This season, McKinstry is slashing .296/.328/.556 through his first 58 plate appearances while seeing time in the outfield and at 2nd base as well. This is the type of player that the Dodgers love. McKinstry is a versatile defender capable of playing all around the diamond and does everything well offensively. He’s consistently shown the ability to hit for a high average, draw walks, and has the upside to flirt with 20/10 over a full season. That will certainly play in fantasy and McKinstry likely adding 2nd base eligibility soon will be an added bonus.

This is my fourth season writing this fantasy baseball waiver wire article and I’m pretty sure Adam Frazier has made an appearance every season. After a three-hit game last night, Frazier is now on a nine-game hitting streak where he’s scored nine runs and has five multi-hit games in his last seven. This streak has pushed his average up to .329 and Frazier has also walked more than he’s struck out this season. The downfall of Frazier is the limited power/speed profile, but Frazier can provide a boost in AVG/OBP and runs as he’s been mostly slotted in the leadoff spot this season.

Unfortunately, it’s sounding like Ke’Bryan Hayes will be out a bit longer after aggravating his wrist injury while swinging a bat earlier this week. But on the bright side, that means Phillip Evans will continue to receive regular at-bats. And if he hits well enough, Evans could stick in the lineup even after Hayes does eventually return. So far so good as Evans has slashed .293/.379/.534 entering Thursday’s game with four home runs and a steal. Although, an 0/4 showing yesterday dropped his average to .274.

This is really the first time Evans has had a chance to play regularly. Beyond the surface stats, Evans has posted impressive statcast data across the board, headlined by an 85th percentile hard-hit rate, 81st percentile average exit velocity and xwOBA, and an 82nd percentile xBA. He’s showing the ability to do a little of everything without hurting you in any one area and will soon be adding outfield eligibility in all leagues as well.

Respect your elders! No, seriously, it’s a viable strategy in fantasy as most will overlook the steady veterans for the flashier, younger options. MVP Joey Votto isn’t walking through that door anytime soon, but Votto is hitting the ball extremely well right now and this really started late in 2020. But let’s focus on this season. After all, that’s why you’re adding Votto to your team(s). It’s still early, but this is arguably the best version of Votto that we’ve seen in several seasons. With another home run last night, Votto is up to four home runs and a .247 average through his first 73 plate appearances.

That average doesn’t really stick out, but the underlying metrics sure do. Votto currently sports a .316 xBA, .647 xSLG, .423 xwOBA, and .469 xwOBACON, all of which are his highest marks since statcast started in 2015. It doesn’t stop there either. Votto also has his best exit velocity, hard-hit rate, and barrel rate in the statcast era as well. That homer last night was Votto’s 4th longball in his last nine games and he’s hit .333 (12/36) over that span while hitting 3rd of 4th every game. This might be his last hurrah of fantasy relevance, but make sure that’s on your team.

Three Pirates in one fantasy baseball waiver wire article? This just proves that you can find fantasy value on every single team, no matter how bad they look on paper. The unusual 2020 season took its toll on many players across the league, Bryan Reynolds included. But now he’s back up to his old tricks, looking a lot like the Reynolds we saw during his rookie season in 2019. That season, Reynolds slashed .317/.377/.503 with 16 homers, 68 RBI, 83 runs, and four steals in 134 games. So far this season, Reynolds has a .308/.400/.462 slash line with a pair of home runs and a 12% walk rate.

Reynolds underlying metrics support his hot start, mainly a .313 xBA, .560 xSLG, and .410 xwOBA. He’s consistently been hitting 3rd in the order and that shouldn’t change any time soon as long as he doesn’t go into any prolonged slump. Rostering Reynolds might not be the most exciting thing in the world, but if you need a boost in AVG with decent counting stats and 20-homer pop, Reynolds is your guy.

As we discussed on the latest episode of the Five-Tool Podcast, the Texas Rangers rotation is pretty uninspiring with one lone exception: Dane Dunning. The former White Sox farmhand is off to a red-hot start to the 2021 season, posting a 0.60 ERA, 0.80 WHIP, and 27.6% strikeout rate. This success has happened following an arsenal shift, both in terms of pitches thrown and the usage of each offering.

Dunning has scrapped his four-seamer this season in exchange for more sinkers, which is already paying dividends. Dunning’s four-seamer was a below-average pitch for him last season while opposing hitters hit a mere .173 against his sinker. That mark has improved to .158 this season despite a 1.5 mph velocity drop. In addition, Dunning’s slider has nearly been unhittable this season, just as it was last season. While wins and quality starts might be hard to come by, Dunning can post solid ratios with a strikeout rate north of 25%.

Okay, I honestly didn’t intend to put four Pittsburgh Pirates players in this article, but that’s just how it shakes out sometimes. In the first three starts of the 2021 season for JT Brubaker, he’s allowed only one earned run in each start. In total, Brubaker has a 1.76 ERA, 1.04 WHIP, and 27.3% strikeout rate across 15.1 innings despite hitting five batters so far including three in his last outing.

Brubaker’s five-pitch arsenal has been a mixed bag this season, with his slider and changeup getting hit around, but his four-seamer, sinker, and curveball have been highly effective, posting a combined BAA of .034. Obviously, this is a small sample size and not sustainable, but Brubaker mixes his pitches well and has a whiff rate above 24% on every offering outside of his changeup.

Eight batters into his season debut, Dinelson Lamet had to be pulled due to forearm tightness. Uh oh. This comes after dealing with similar issues dating back to last season, making one wonder if Lamet will be looking at a lengthy absence here. At the very least, he’s going to miss a few starts and Ryan Weathers will be taking his spot in the rotation. Yes, I know everyone was hoping this spot would go to MacKenzie Gore, but that’s not going to happen quite yet. Weathers isn’t nearly the same caliber pitcher that Gore is, but there’s reason to be intrigued in 12+ team leagues.

In his second start of the season against the World Champion Dodgers, Weathers tossed 5.2 shutout innings, allowing one hit and one walk while striking out six with a 33% CSW rate. Weathers kept hitters off balance all game, mostly with his bread and butter fastball/slider combination. This outing lowered his ERA to 0.61 through 14.2 innings this season with a 16/5 K/BB. Weathers has never been a big source of strikeouts but his above-average command and control profile gives him a sturdy floor and he’s going to get a chance to stick in the rotation for now as long as Lamet is out.