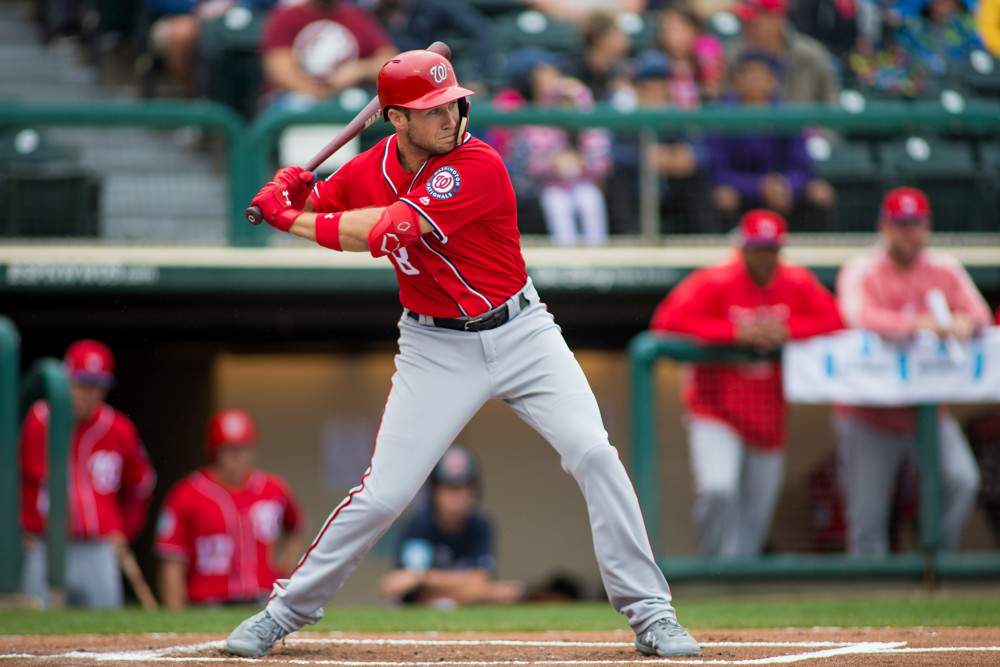 This week’s Fantasy Baseball waiver wire report got a infusion of youth with several top prospects getting the call over the last week or so. Yes, more prospects than just Vladimir Guerrero Jr have been promoted. Though, on that note, HAPPY VLADIMIR GUERRERO JR DAY! Okay, sorry, had to get that out of my system. Luckily this report comes out on Fridays each week as my top waiver wire recommendation this week was promoted from Triple-A last night. If you look at the title, you can figure out who that is.

Well, he didn’t get called up in time to make my Prospects Report this week, but Carter Kieboom immediately becomes the most interesting Fantasy Baseball waiver wire pickup of the week. Get ready to see some big FAAB bids this weekend. Kieboom has developed into one of the best shortstop prospects in the minors over the last couple of seasons. He might not quite be on the Wander Franco, Royce Lewis, Bo Bichette level, but Kieboom is right in that next tier with the likes of Andres Gimenez and Brendan Rodgers. In my top-250 prospects list in February, I ranked Kieboom 22nd overall as the 5th best shortstop prospect in baseball.

In his first taste of Triple-A ball this season, Kieboom has flourished, hitting .379/.506/.636/1.142 with 10 extra-base hits, three home runs, 18 RBI, and 14 runs in 18 games. On top of that, Kieboom has displayed a more patient approach this season, improving his walk rate from an already solid 10.4% in 2018 to a robust 19.3%. With an above-average hit tool and above-average to plus power, Kieboom offers immediate upside in both the batting average and power departments.

And for those worried that this is a temporary promotion, relax. Trea Turner is still out for another couple weeks and second base has been mostly a black hole for Washington this season. Kieboom made six starts at second base this season and got plenty of work in there during the 2018 Arizona Fall League. As long as he hits, he should be up for the long haul. Get those wallets out.

In case you haven’t noticed, Renato Nunez has been one of the hottest hitters in baseball lately. Over the last two weeks, Nunez has been a top-10 fantasy contributor due to hitting .333 with five homers, 13 RBI, and 11 runs scored. Included in that is a 5/9, three ding dong combined performance during a double-header on April 20th. With Nunez off to a hot start and the Orioles not really having many better options, Nunez has put a lockdown on the cleanup spot in the lineup, starting there routinely over the last couple weeks. He’s unlikely to keep this pace up for the rest of the season, but Nunez absolutely needs to be owned right now as a guy that could finish around .270 with 20-25 homers and 150-plus R+RBI.

As a die hard Red Sox fan, I hate to see a veteran beloved player like Dustin Pedroia land on the IL over and over. But if there’s a silver lining to the latest IL trip for Pedey, it has opened an opportunity for Boston’s top prospect, Michael Chavis, to come up and show what he can do. And what Chavis does is hit the ball… hard. I caught many Chavis at-bats live when he was in Double-A and hard contact was a regular ending to his at-bats. Whether it resulted in a hit or an out, most of the contact he made was loud. Even now, his average only sits at .222 through his first 18 at-bats, but three of Chavis’ four hits have gone for extra bases with two leaving the yard.

Michael Chavis out here trying to knock the light tower over. pic.twitter.com/mXfbHWewqE

He wasted no time showing off his plus power wuth his first career homer travelling 441-feet. With Chavis’ power and fly ball tendencies, Fenway Park is a great park for him to be playing his home games in. Even if he remains hitting 7th or so in the order, there’s enough talent around him to allow him to contribute solidly in runs and RBI, and Chavis’ batting average should start creeping up soon. I don’t expect Pedey to be back any time soon and Eduardo Nunez/Brock Holt are better suited as backups which should allow Chavis to play regularly at second base moving forward. If he’s still sitting on your waiver wire, I’d scoop him up in a heartbeat.

Continuing on this youth movement theme we have going on, Cole Tucker would like your attention. The Pirates promoted Tucker to take the place of the Erik Gonzalez and the rookie with the flowing locks has a real chance to take over the starting shortstop role in Pittsburgh permanently. Tucker was a career .269 hitter in the minors with plus speed that translated into 36 steals per every 500 at-bats. There’s not much power upside here, but with his contact skills and speed, Tucker has the tools to provide steady fantasy value as long as he’s starting. If he gets 450-500 at-bats the rest of the way, something along the lines of .270 with 20-plus steals and a handful of home runs is a real possibility.

Ah, the infamous Josh Reddick hot streak. While varying in duration, the Reddick hot streak is an annual occurrence, making him a hot Fantasy Baseball waiver wire addition at some point every season. For 2019, that time appears to be right now. Up until last night, Reddick was on a seven-game hitting streak with five of those being multi-hit efforts. The hot streak has pushed his season slash line up to .375/.423/.528/.951 with three home runs in 20 games. Anyone playing regularly in Houston’s loaded lineup warrants fantasy consideration and Reddick has proven that he can be a reliable asset many times in the past. Sure, he has Kyle Tucker and Yordan Alvarez breathing down his neck, but for now, Reddick is worth adding in mixed leagues.

One of the most common questions I received on Twitter over the last 48 hours was what can we expect from Ty France and should he be added in fantasy? The short answer is yes in deeper leagues. France was absolutely annihilating Pacific Coast League pitching to the tune of a .423/.500/.885/1.385 slash line with seven doubles, nine homers, 28 RBI, and 24 runs scored in just 19 games. With Luis Urias back in Triple-A, Jose Pirela hurt, and Ian Kinsler declining with each passing game, France has a chance to play semi-regularly moving forward if he can carry any momentum over from Triple-A and prove he’s not as offensively challenged as Kinsler. That shouldn’t be too hard. Those in NL-Only or deeper mixed leagues should give France a look.

Before the season, Velasquez was one of my starting pitcher sleepers for the 2019 season. I had him pegged for a so-so ERA/WHIP due to his inconsistent command, and a high K rate to go along with it. While the K rate is still around a strikeout per inning, it’s the improved control/command which has me impressed with Velasquez’s start to the season.

After making one relief appearance, Velasquez has made four starts and hasn’t allowed more than two earned runs in any of them while dropping his BB/9 to 2.8, nearly a full walk less than last year’s rate. After his five shutout innings on 4/24 against the Mets, Velasquez now sits at a 1.99 ERA and 1.01 WHIP on the season. Velasquez has always had the stuff to be a mixed league asset, and if this improved command continues, Velasquez could be a top-50 fantasy starter at season’s end.

The closer role in Tampa Bay has been a revolving door this season with five different pitchers recording at least one save. The latest to enter the saves mix, recording back to back saves on 4/22 and 4/23, is Emilio Pagan. After a couple seasons on the west coast, Pagan came to Tampa during the offseason and has started the season with six hitless innings and a 6/1 K/BB ratio. While he might not be the full-time closer moving forward with other solid options like Jose Alvarado and Diego Castillo in this pen, Pagan is definitely in the saves/holds mix.