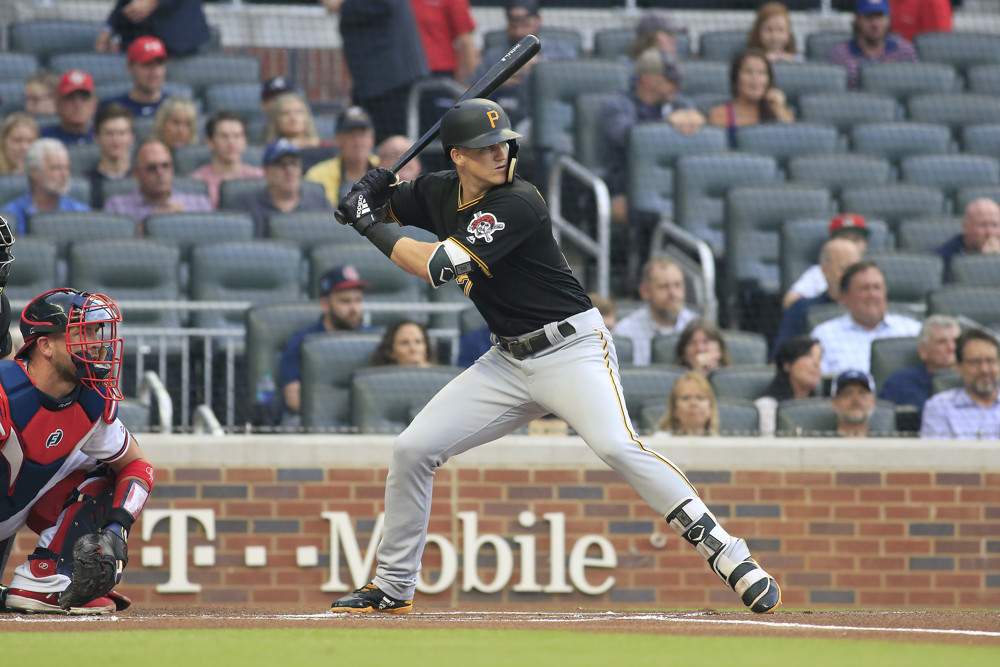 We’re now in what I consider to be the most crucial month of the fantasy baseball season when it comes to waiver wire usage. The month of June is the month where tough decisions need to be made for the sake of saving your fantasy season. For re-draft leagues, it’s time to get rid of the guys you’ve been holding all season, hoping they’ll get out of their season-long funk and perform like you thought they would back in the pre-season when you drafted them.

Everyone is guilty of it. Jesse Winker was my personal example of this on a few of my teams. Could he bounce back later in the season and provide some value? Sure. But, if I want to be in a good spot with those re-draft teams, I had to kick him to the curb and hit the waiver wire hard. Don’t be the one that waits too long and misses out on adding guys that can turn your season around.

Hello, Newman. Man, if you didn’t watch Seinfeld in the 90s, what were you doing? Between Kevin Kramer and Kevin Newman, the Pirates have a little Seinfeld theme going on in this organization. You could tell me they have someone in the front office named Elaine and I’d believe it. Well, Newman is putting down the mail sack for a bit in order to take over as the Pirates starting shortstop and leadoff hitter, pushing Cole Tucker back down to Triple-A Indianapolis.

During his time as a Pirates farmhand, Newman displayed an above-average to plus hit tool with above-average speed and a solid plate approach along with it. For his minor league career, he hit .287 with a .343 OBP, 10.3% K rate, and 23 steals per every 600 at-bats. All of which have carried over to the Majors this season as his 86.0% contact rate ranks 13th in baseball and his 6.8 SwStr% is the 18th lowest mark. With how well Newman has played this season, Pittsburgh has slotted him in the leadoff spot right in from of Bryan Reynolds, Starling Marte, and Josh Bell who are hitting .350, .285, and .320 respectively.

If Newman can continue to post a high contact rate and low K%, expect the average to remain high with some modest speed and runs scored numbers as well. This is a sneaky-good waiver wire pickup if you need a middle infielder.

There hasn’t been this much excitement surrounding a player named “JaCoby” since Jacoby Ellsbury was still healthy and productive. Both of which feel like decades ago. Earlier this week, the Tigers realized that JaCoby Jones is their best current leadoff option and moved him into the spot. Jones scorching last month of play had a lot to do with the switch in lineup spot. Over the last month, Jones has hit .365 with six home runs and four steals batting mostly from the bottom of the order. That power/speed blend is nothing new as Jones flashed above-average raw power and double-digit speed throughout his minor league career. Assuming this elbow injury is nothing serious, Jones is one of my favorite waiver wire targets around right now due to his ability to provide solidly across the board. Keep an eye on his injury updates.

For a week stretch in mid-May, Willie Calhoun was a waiver-wire darling. From 5/15-5/21, Calhoun hit .435 (10/23) with two homers, seven RBI, and five runs scored. Finally. After two years of struggling at the Major League level, Calhoun was finally showing some promise! Then came the strained left quad on 5/21, reminding us that this is why we cannot have nice things. But maybe, just maybe, we can get Calhoun back in our lineups soon. The pint-sized slugger has begun a rehab assignment and is expected to return to the Rangers lineup within the next week, likely back in a starting gig.

Yes, his first two stints in the Majors didn’t go according to plan, but one must not forget that Calhoun can flat out rake and packs as much of a punch as a 5’8 hitter can, displaying 30-homer upside in the minors with the ability to hit for a good batting average as well. Even when he’s struggled, Calhoun has always limited his strikeouts very well and even had more walks (22) than strikeouts (19) before his promotion to Texas this season. From the looks of his near 90% availability in fantasy leagues, Calhoun is likely sitting on the waiver wire in your leagues just waiting for you to click the add icon next to his name.

From the king of sleepers to the court jester. The 2018 season wasn’t overly kind to Mr. Kingery. He got off to a terrible start to the season and was never really able to recover, finishing the season with an uninspiring .226/.267/.338/.605 slash line. He did chip in eight home runs and 10 steals, but that wasn’t nearly enough to offset the damage he did to fantasy owner’s AVG/OBP.

Fast forward to this season and Kingery has pulled a complete 180. In 111 at-bats, Scotty-K has a much improved .315/.356/.613/.969 slash line with 10 doubles, seven home runs, and two steals. This added power has been a welcomed addition to Kingery’s offensive profile after just the eight dingers all of last season. A reason for this has been Kingery’s near double hard contact rate a more pull-happy nature. Sure, his high .379 BABIP and subpar K/BB rate signal for some batting average regression, but even with an average in the .270-.290 range, Kingery’s power/speed profile provides plenty of value now that he’s starting regularly in center field with Andrew McCutchen done for the season.

Death, taxes, and Brian Dozier heating up in the 2nd half of the season. Ah, the three certainties in life. Throughout his career, Dozier has been a notorious slow starter, hitting .220 in April and .236 in May. Flip the calendar to June and that average goes all the way up to .267. This season has been no different. Dozier hit .184 in April, .233 in May, and now is scorching in June, hitting .387 with a 1.246 OPS in 31 at-bats.

We all know it can be frustrating to own Dozier throughout a season due to how up and down he can be from lower contact rates, but this season he’s stayed mostly in the middle of the pack in contact percentage, ranking 113th of 163 qualified players and 82nd of 180 in the Month of June. Both his hard contact and fly ball rates are up a few percentage points this season as well. If you’re hurting for a middle infielder or some power, give Dozier a look.

If you know me, you know I’ve been a Pablo Lopez supporter all season parking my rear end in the Pablo Lopez fan club. Even including him in this waiver wire report not too long ago. Now, being a member of this fan club had certainly had its share of ups and downs this season. A 6.60 ERA through his first three starts dimmed his sleeper gleam and a 3 IP, 10 ER disaster in Citi Field against the Mets on May 10th caused owners to drop him like he was hot. Or not hot, you get it.

We can all forgive and forget, can’t we? I mean, Lopez has completely turned things around since that outing. In four of his last five starts, he’s gone 6+ IP and allowed zero or one earned run in each start. This recent hot stretch has dropped his ERA from 5.93 all the way down to 4.26. There’s honestly a lot to like here with Lopez ROS. He’s only allowed more than two walks in an outing once this season and is right at a strikeout per inning.  Those of you in Wins leagues likely won’t get a ton of help in that category, because you know, the Marlins are horrible, but the ratios should be solid and expect a fair number of quality starts.

Lopez is still available in over 3/4 of fantasy leagues. Don’t make me included him in this article again in a few weeks. I’ll do it!

Two things really surprised the buzz around Peter Lambert’s call up and MLB debut. First was the name across the front of his jersey. Even with the success of German Marquez, Kyle Freeland (last year, not this year), and Jon Gray over the last few seasons, the Rockies pitcher stigma is still quite strong. Giancarlo Stanton strong, if you will. Next was his uninspiring 5.07 Triple-A ERA. But remember, Triple-A can be a nightmare for a pitching prospect’s ERA, especially the Pacific Coast League.

Now that we have all of that out of the way, how about some positives? If you’re going to have any type of success while pitching half of your games at Coors Field, you’re going to need to keep the ball on the ground. Lambert does that. In each of the last two seasons, he’s recorded a ground ball rate right around 50% with fly ball rates below 35%, thanks in large part to his low-90’s fastball with strong sinking action. That, along with his plus command and above-average to plus curveball and changeup, will certainly help limit the damage. Don’t expect his first two starts to be the norm, but there’s a good chance for Lambert to provide solid back-end value the rest of the way.

After over a decade as a starter with mostly middling numbers outside of a 21-win season in 2011 with Arizona, Ian Kennedy converted to a bullpen role this season and has found moderate success so far with a 3.71 ERA, 1.4 BB/9, and 11.5 K/9 in 26.1 innings. Both the walk and strikeout rate are career-best marks while the ERA is Kennedy’s lowest since the 2014 season.

As you can expect, Kennedy has made some changes since moving to the pen. First, his fastball velocity is up nearly two full mph this season from 91.9 mph to 93.7 mph. Not at all surprising for a pitcher going from a starting role to shorter bullpen stints. Beyond that, Kennedy has all but eliminated the changeup from his arsenal, throwing it less than 2% of the time this season, opting for a three-pitch fastball-cutter-curveball mix. The cutter has experienced even more of a velocity jump, rising from 87.6 mph to 91.2 mph this season.

It appears that Kennedy has taken over as the full-time closer in Kansas City for the foreseeable future and is still widely available in fantasy leagues… For now.