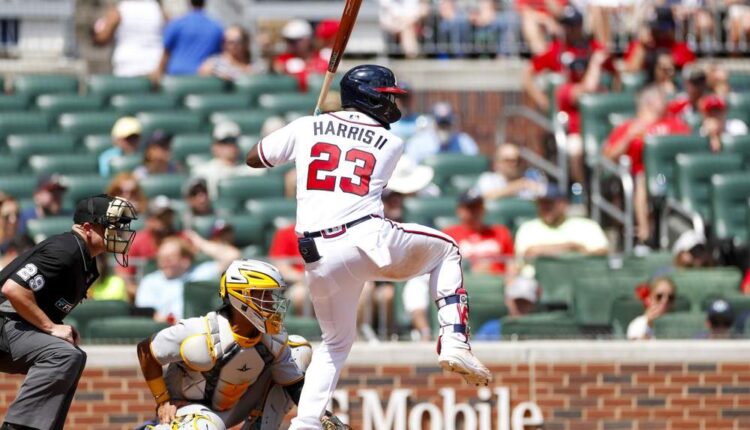 Another week, another Fantasy Baseball Waiver Wire report here on FantraxHQ. Regardless of what style league you play in and what point of the season it is, we should always be looking to improve our fantasy teams. Whether you’re looking to catch the next red hot breakout, find an injury replacement, or improve in a specific statistical category, the waiver wire can help you accomplish all of those. This week’s report is filled with exciting offensive targets, including plenty of possible replacements for all of you that just lost Ozzie Albies.

I’ll admit, Atlanta calling up Michael Harris straight from Double-A was surprising, but the 21-year-old outfielder has excelled thus far. A current eight-game hitting streak has pushed Harris’ season line to .328/.357/.537 in 70 plate appearances with two homers, two steals, 11 RBI, and 12 runs scored. This after slashing .305/.372/.506 with five homers and 11 steals in 43 Double-A games. It’s certainly nice to see Harris’ power tick up this season, posting an ISO over .200 at both levels. He’s long been known for his ability to hit for a high AVG and steal bags, but the additional power gives Harris a well-rounded offensive profile that could make him a top-100 overall fantasy selection one day. You won’t find this much upside on the waiver wire often, so go scoop him up if he’s available.

Michael Harris II now owns an .874 OPS as he plays in his 17th big league game. I think he's fitting in quite nicely with the #Braves. pic.twitter.com/4oqBNgQgBz

Many fantasy managers rejoiced when Luke Voit was traded to San Diego, seemingly putting him in a position to play more regularly than he did with the Yankees. Well, it took a while for Voit to find his groove this season, but he’s really begun heating up in the month of June with five home runs and 18 RBI with a .254 AVG. That .254 AVG is likely in the ballpark of what you’ll get with Voit, but he’s always been a top-notch power bat when he’s been on the field, evident by his 62 home runs in 1177 plate appearances since the start of 2019. Voit’s quality of contact metrics have remained solid as well with his barrel rate and hard-hit rate staying above 13% and 40% respectively for each of his last five seasons. If you need a power boost or some corner infield help, Voit can help you out.

Similar to Harris above, Ezequiel Duran was quietly having a very productive season in the Double-A leading up to his promotion a couple of weeks ago and has continued that performance in the Majors with Texas. In 200 plate appearances in Double-A, Duran slashed a stellar .317/.365/.574 with seven homers, seven steals, and a whopping 24 doubles. That power/speed blend has continued with Texas as Duran has a pair of homers and steals in 12 games while hitting .317. Duran has always shown that level of power and speed throughout his professional career, racking up 46 homers and 48 steals in 284 games. But it really wasn’t until late last season that Duran received top-100 consideration in prospect rankings. With his power/speed blend and multi-positional eligibility, Duran should be a priority waiver wire target right now in all 12+ team leagues and deeper 10-teamers as well.

Amed Rosario was a preseason, late-round sleeper target for many, but it’s taken until recently for him to put himself back on the radar in mixed leagues after a very sluggish start to the season. Over the last two weeks, Rosario is hitting a robust .375 with a home run, three steals, and 13 runs scored. He, unfortunately, won’t be able to play all his games in Coors Field where he’s gone off the last few days, but Rosario can help managers in need of speed or a fill-in at shortstop or outfield right now. Don’t expect much speed, but a .270+ AVG and 15+ steals the rest of the way is certainly possible.

While losing a top-25 pick like Ozzie Albies is never easy, Orlando Arcia becomes an intriguing waiver wire target this week as he steps into the starting lineup. The former Milwaukee top prospect hasn’t lived up to expectations in the Majors overall, but his performance and underlying metrics in limited playing time this season have been incredibly impressive. In 66 plate appearances, Arcia has slashed .375/.439/.607 with a trio of home runs but his underlying metrics might even be more notable.

Arcia currently has a 13.6% barrel rate, 94.9 mph AVG EV, and a 56.8% hard-hit rate while displaying a sound plate approach as well. With Albies out for the next two months at least, Arcia’s value gets a solid boost and he could be a viable four-category producer moving forward that will soon have 2B/OF eligibility.

With St. Louis getting all of their bats back in action, it speaks volumes that they’re still playing Brendan Donovan every day. It also helps that he can play multiple positions around the infield. In  154 plate appearances this season, Donovan is slashing .341/.448/.465 with 22 runs, 20 RBI, one homer and two steals. While he doesn’t possess a sexy power/speed blend and his quality of contact metrics are uninspiring, Donovan can help in runs, RBI, and AVG/OBP while adding value with his three-position eligibility. He’s a great stop gap to plug in while you wait for your starter to return from injury.

Another great target for all of you that lost Ozzie Albies or just need middle infield help is Luis Garcia. In 61 plate appearances since his callup, Garcia is hitting .326 with a pair of home runs and 9 RBI while starting regularly for the Nationals. Don’t worry, there’s literally no threat to his playing time neither as long as he performs adequately at the plate. Garcia really reinvented himself as a hitter over the last two years, adding more power than we had ever seen from him previously.

When you combine his Triple-A numbers from 2021 and this season, Garcia cranked 21 homers in 79 games with a .296 ISO and .599 SLG last season and .217 and .531 respectively this season. He added power while also hitting over .300 in both stints with a 17% strikeout rate. Don’t expect any steals from him, but Garcia has the skills to hit .270+ with a 20-25 homer pace the rest of the way while having dual 2B/SS eligibility in most leagues.

In general, the Oakland Athletics have put a minor league lineup on the field for most of the season, but that doesn’t mean we can’t find fantasy value in that lineup here and there. In the month of June, Christian Bethancourt has been starting regularly, mostly at first base, and has racked up four home runs, nine RBI, seven runs, and a steal while hitting .333 in 39 plate appearances. His underlying metrics have been even more impressive too.

Bethancourt currently sports a 16% barrel rate, 91.9 mph AVG EV, and 49% hard-hit rate. His AVG will likely come back down due to his aggressive approach, but Bethancourt’s power is why you’ll be targeting him in fantasy leagues right now. If he was strictly a first baseman, I’m not sure I’d be recommending him this week, but that catcher tag next to his name makes Bethancourt a lot more appealing.

While Hunter Greene has hogged the spotlight and Nick Lodolo to a lesser extent, Graham Ashcraft has quietly gone about his business through his first five Major League starts. In 28.1 innings of work, Ashcraft has posted a 2.22 ERA and 1.02 WHIP, albeit, with a less than spectacular 12.9% strikeout rate. Outside of 2021, Ashcraft has never been known as a big strikeout guy, so don’t expect him to magically jump to 25%, but what he can do is post solid ratios for your team.

Since opening day in 2021, Ashcraft has a stellar 2.69 ERA in the upper minors and had a 1.65 ERA in seven Triple-A starts before his promotion. He’s done a superb job limiting hard contact and walks, both areas that got Hunter Greene into trouble earlier this season. And while I don’t expect big strikeout numbers from him, Ashcraft definitely has the stuff and command to improve on his current K rate, maybe even settling in around 20%.

One of the biggest underachievers when it comes to surface stats this season has been right-hander Alex Cobb. On the surface, Cobb’s 5.73 ERA and 1.49 WHIP doesn’t inspire many to hustle over to their league’s waiver wire, but his underlying metrics sure will. To start, Cobb’s ERA indicators are all below 3.00 with his xERA sitting at 2.06. He’s also allowed a tiny 1.9% barrel rate while posting the best strikeout rate and K-BB rate of his career at 28.7% and 21.4% respectively. And to take things one step further, Cobb’s whiff and chase rates are both above league average with his chase rate sitting at a lofty 36.3%. I’m fully a believer that Cobb is in for a major turnaround moving forward and he’ll return to the mound this Sunday against Pittsburgh.

If you’re looking for some help in the saves department this week, Seranthony Dominguez, Brad Hand, and Kendall Graveman are a trio you should look at. Graveman is expected to be the primary beneficiary when Hendriks is on the IL with Hand and Dominguez likely sharing closer duties while Knebel pitches in lower-leverage situations.