Let’s take a deep breath. This time of the season is prime time for overreactions and panic button smashing, but we still have over 150 games remaining in the season. There’s no need to panic just yet when around 95% of the season still remains. Yes, losing Fernando Tatis Jr sucks. There’s no more eloquent or professional way to say that. It flat-out sucks. But you gotta find a replacement and move on. That’s how the fantasy baseball world works. Tatis isn’t the only notable player to get hurt this week, so this week’s Fantasy Baseball Waiver Wire report can hopefully help you find some solid pieces to fill into your lineup. Included is a trio of Tigers, which is something I never thought would happen when I sat down to write this.

For those of you that have unfortunately lost Fernando Tatis Jr for possibly the entire season, Willi Castro would be my top recommendation as someone that is probably available in your league. Castro is a far cry from Tatis (who isn’t), but the 24-year-old infielder has the tools to stick as a mixed-league-relevant shortstop this season. In the minors, Castro displayed above-average contact skills with above-average speed and now his power has ticked up over the last year or so as well. Castro slugged six homers in 140 plate appearances last season and added three more in 52 plate appearances this spring.

Willi Castro is picking up where he left off. #DetroitRoots pic.twitter.com/z9kgAWKq6o

But while the power has ticked up, Castro hasn’t appeared to want to run as much, attempting only one steal in 2020. It would be great if he decided to run more, but even if he doesn’t, Castro has the potential to hit .270+ this season while approaching 20 homers. Detroit’s lineup around him isn’t stellar by any means, but Castro has hit in the top-3 every game thus far which should keep his counting stats respectable as well. This is far from a sexy pickup, but certainly can be a productive one.

Most of the time, these waiver wire recommendations are stats-based, but not this one. Even since Ha-Seong Kim has come to the states by way of the KBO, he’s struggled with the transition. Kim is off to a 3/18 start this season after going 7/42 in spring training without a home run or a steal. But on the plus side, Kim did walk nine times in spring training, showing that his patient approach in the KBO could transfer over into the Major Leagues.

Again, I can’t wow you with any metrics here for Kim, but this is a hitter that showed a great approach in the KBO with the upside to flirt with 15/15 annually. He’s also the primary beneficiary from the Tatis injury and has started the last three games at shortstop since Tatis landed on the IL. It’s sounding like Tatis should be out for a while as well, maybe even for the remainder of the season, so Kim could be in for a big boost in value as long as he shows he can handle Major League pitching well enough to remain an everyday starter. I’d give him a look in 12+ team leagues.

There was a brief period of time when Akil Baddoo was approaching the top-50 in my prospect rankings. That time was early in 2018 when Baddoo was coming off a .323/.436/.527  line in 2017 with more walks than strikeouts and a 12-homer/27-steal pace. Following that impressive showing, Baddoo’s average plummeted to .243 and .214 respectively in 2018 and 2019 as he advanced past rookie ball and into Single-A. But while the average dropped, Baddoo’s high walk rate remained and he was still pacing at a similar power/speed pace each season. The drop in average was a bit of a surprise too as Baddoo graded as at least a 50-hit player by most that saw him.

He homers on the first pitch of his MLB career. pic.twitter.com/JKI5goelHQ

It was a bit of a surprise to see Baddoo make the opening day roster following two lackluster seasons in A-Ball, but with how he performed in spring training, it was warranted. Baddoo slashed .325/.460/.750 with five homers and four steals in 50 plate appearances. That strong performance has carried over into the regular season as well with two homers and a steal through his first five games with a 92nd percentile sprint speed. It’s not like Detroit has an all-star cast of outfielders on the roster either. If Baddoo continues to perform, he should have not issues staying in the starting lineup on a regular basis and had the power/speed blend to make a decent fantasy impact this season.

While he has cooled down a bit from his scorching start to the season, Cedric Mullins is still riding a seven-game hit streak with a home run, steal, and five runs scored. Mullins has done all this while serving as Baltimore leadoff hitter in every single game. It doesn’t matter what team you play for, leading off is leading off. And Baltimore’s lineup is definitely on the up and up with Ryan Mountcastle, Trey Mancini, and Anthony Santander all hitting behind Mullins. That’s not Murderer’s Row, but if Mullins can stick in the leadoff spot, he could get up into the 80-90 runs scored range this season.

However, for Mullins to stick in the leadoff spot, he’s going to have to hit as he’s never been one to walk at a high clip. Mullins posted a 7.6% walk rate in the minors and that has dipped to 6.9% in the Majors. That’s not terrible, but again, it puts more emphasis on Mullins hitting for a solid average to stick at the top of the order. Mullins certainly has the speed for the top of the order and that speed is primarily why I’m recommending him this week. In the minors, Mullins paced at 36 steals per 162 games and was on a near 30-steal pace in 2020 as well. A .270/80/10/25 season is within reach in 2021 for Mullins which gives him plenty of intrigue in fantasy leagues.

I’m not sure what’s in the water this season in Cincinnati, but I’m digging it. The Cincinnati Reds have been red hot to start the season and Tyer Naquin has been a massive part of that. Naquin currently leads the Major Leagues in home runs with five and is tied for the league lead with 14 RBI. Keep drinking that kool-aid Tyler! 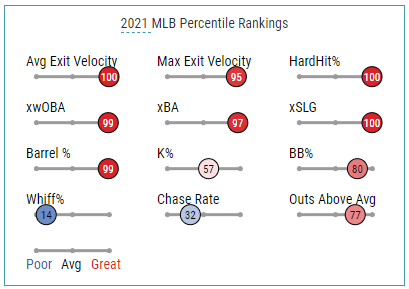 As you can see above, Naquin is pummeling everything he sees this season with a 99th percentile barrel rate and 100th percentile average exit velocity, hard-hit rate, and xSLG. He’s also spent plenty of time in the leadoff spot this season with Nick Castellanos, Joey Votto, and Mike Moustakas hitting directly behind him. Is this hot start going to last? Probably not. Is Naquin going to sink back into waiver wire fodder later this season? Possibly. But as long as he’s hitting this well, Naquin needs to be rostered in all but the shallowest of leagues.

How is Tarik Skubal still available in around 2/3 of leagues? This was one of the best pitching prospects in baseball for the last two years or so and one with immense strikeout potential. In 2019, Skubal posted a 2.42 ERA, 1.01 WHIP, and a ridiculous 36.5% strikeout rate, including a 48.3% mark in Double-A. Sure his 2020 Major League debut wasn’t spectacular with a 5.63 ERA, but Skubal still posted a 19.4 K-BB% which would’ve put him right in the middle of Hyun-jin Ryu, Carlos Carrasco, Zac Gallen, and Lance Lynn. That mark could rise a bit too as Skubal’s strikeout rate was only 27.6% in 2020, and he’s capable of a mark higher than that.

Tarik Skubal was doing some painting on Sunday afternoon. pic.twitter.com/OJf1VpJuWA

In his first start of 2021, Skubal allowed two runs over 5.1 innings against Cleveland and will get the light hitting Cleveland squad once again in his next start followed by the Oakland Athletics who are off to a terrible start and rank 29th in both wOBA and wRC+ so far. His next two starts after that line up to be against Pittsburgh and Kansas City too. So yeah, Skubal has an easy upcoming schedule. I’d bet a ton of money that Skubal is rostered in more than double the leagues he is now by the end of April.

For the last several years, Kenley Jansen has been the man in Hollywood. I’m not including Corey Knebel here in anticipation of Jansen losing the role entirely, but it’s certainly possible that Knebel sneaks in 5-10 saves this year as the primary backup for save opportunities on the Dodgers. As the most talented team in baseball, the Dodgers are going to win a ton of games once again this season, possibly topping 100 for the second full season in a row. And when you win a ton of games, you’re likely going to get some games where Dave Roberts goes to Knebel for the save as Jansen has pitched in the last couple of games.

Through his first 3.1 innings of work, Knebel has dominated, allowing just one lone walk while striking out six. After missing 2019 and struggling in 2020, Knebel was basically off the fantasy radar entering 2021 and likely is available in most leagues. Looking back to 2017 and 2018, Knebel was one of the more effective relievers in baseball. Over 133 appearances spanning 131.1 innings, Knebel combined for a 2.54 ERA, 1.13 WHIP, and 40.2% strikeout rate. If you’re already chasing saves, which a lot of us are, Knebel or this next man are a great place to start.

The trendy reliever to roster this season in Cleveland has been a big game of musical chairs. James Karinchak was the hot target in spring drafts until Nick Wittgren emerged late in spring training. Now, after how he’s looked to start the season, it appears that Emmanuel Clase could be in the mix for saves as well. Through three appearances, Clase has pitched three perfect innings while striking out five of the nine batters that he’s faced.

Clase has worked primarily with his cutter/slider combo which hitters haven’t been able to touch yet this season. The cutter has averaged 100.6 mph with a 40.6% whiff rate while his low-90’s slider has a whopping 80% whiff rate so far. Obviously, this is a small sample size, but Clase has always had electric stuff like this and is back to being 100% healthy. At the very least, Clase should be able to provide good ratios and plenty of strikeouts, and if he’s able to continue getting some save opportunities, his value would get a nice boost.