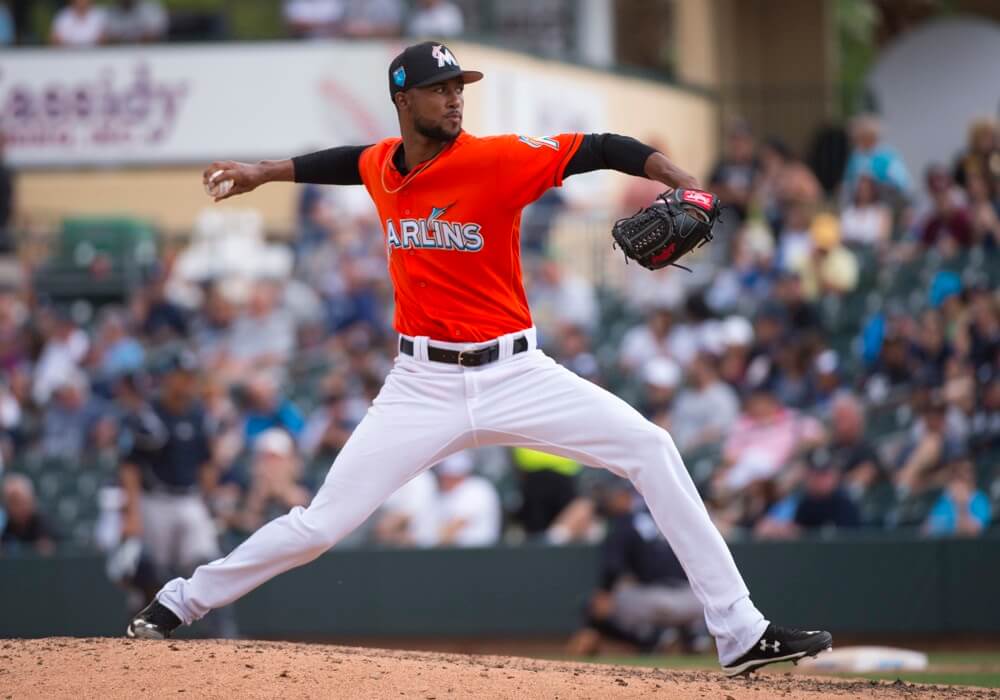 Alright, take a deep breath. The madness of opening day and the first week of the regular season is over and we can now settle into a groove. There’s no need to panic about your team quite yet, but tinkering and trying to improve is always welcomed. Unless you play in a league with me. In that case, leave your team alone. Kidding aside, let’s check out the fantasy baseball waiver wire for some roster boosters, including two closers! Who doesn’t need more saves?

A lot of people have been looking at Yandy Diaz as a trendy breakout pick for the last year or two and that breakout could very well be happening in 2019. Diaz has hit safely in each of his seven games this season, hitting .360 with two home runs, three RBI, and six runs scored. He’s played in all but one of Tampa Bay’s games thus far and has slotted anywhere from leadoff to 5th in the lineup, giving him solid upside in R+RBI potential as he’s shown in his first seven games.

OKAY Yandy go off then 💪

Yandy Díaz breaks his bat on his two-run HR in the first inning.

All of that is nice, but what has impressed me the most is the two homers. Coming into 2019, Diaz had one career dinger in 265 at-bats but had teased us with his raw power, hinting that more power was on the way. With a solid plate approach and contact skills, Diaz should be able to hit for a good average with some modest power and R+RBI to go along with it. If you don’t expect anything in the speed department, you should be happy with your investment.

Already trending up, Christian Walker is now firmly on the mixed league radar after the news that Jake Lamb will be sidelined six weeks with a quad strain. The two had been sharing time at first base and now Walker will get the lion’s share of the playing time there with Lamb on the shelf. Just ignore the back to back 0/4 games for a second and focus of the future. Walker has been hitting the ball hard this season and already has three home runs despite receiving only five starts to date. That power is his calling card. In Walker’s very limited and scattered career, he’s slugged nine homers in 107 at-bats and 50 over his last 838 minor league at-bats. If your fantasy team needs a power boost, Walker is your man.

Who doesn’t love Willians Astudillo? The portly catcher became a fantasy darling down the stretch in 2018, hitting .355 with as many home runs as strikeouts (3) in 93 at-bats. How often can you say that last part? Granted, he only walked twice in those at-bats, but hey, the man likes putting the ball in play. Regardless of where he’s been playing, that contact-oriented approach has been extremely prominent throughout his career. In 2,265 minor league at-bats, Astudillo struck out just 81 times for a neat little 3.6% strikeout rate. That number drops to 2.2% in his 623 Venezuelan Winter League at-bats.

At the very least, you can expect a solid batting average from Astudillo this season, which is more than you can say about most current Major League catchers. Don’t expect much outside of that average, but if Astudillo continues to start a few times a week, he’s worth owning in mixed leagues for the batting average boost he can provide.

Lost in the immense buzz of the Chris Paddack debut over the weekend was a very strong outing from Sandy Alcantara. In fact, his performance was arguably the better of the two. Alcantara tossed eight shutout innings against a good Colorado offense, allowing four hits and zero walks while striking out six. With three above-average to plus pitches, the upside with Alcantara has always been intriguing, but his inconsistent command has held him back. It’s just one start, but the command was certainly there against Colorado.

Sandy Alcantara looks phenomenal against the Rockies. Working in the zone, going after everybody. Super fast pace, pretty much getting the ball and throwing. Didn’t go over 16 pitches in any inning.

Just ended the 8th striking out Garrett Hampson on a fastball in a 3-2 count.

He even struck out the great Garrett Hampson! If that doesn’t make you run to your waiver wire, I don’t know what will. The upside alone is worth an add in mixed leagues and if the command remains in check, we could be looking at a top-50 pitcher ROS with close to a strikeout per inning. If you’re a little skeptical and want to see him again before adding him, he’s going tonight against Atlanta.

Facing the Houston Astros in your season debut? No problem for Yonny Chirinos. In seven innings of work, Chirinos allowed just a pair of hits and one earned run while striking out six. It was encouraging to see him get off to a good start after battling forearm issues last season. For the time being, Chirinos should stay in the rotation and has a juicy matchup with the Giants up next. The upside here is too much to leave on the wire.

As is accustomed this early in the season, certain bullpens across MLB are frequently changing in the back end. Hunter Strickland entered the season as the closer in Seattle, but is now on the 60-day IL with a Grade 2 right lat strain. That injury has opened the door for Anthony Swarzak to slide into the role and he converted on his first save attempt in his first outing of the season on Tuesday, getting the final two outs in a 2-1 win against the Angels.

Swarzak was one of the top relievers in baseball in 2017, but really struggled last season with the Mets. In 29 appearances, the 10-year vet recorded a 6.15 ERA and saw his BB/9 rate nearly double from 2.6 to 4.8. That was the first time since his rookie season in 2009 that his walk rate was above three. Even with the down season, Swarzak still posted a strong strikeout rate and could be a borderline RP2/3 moving forward as long as he has the role.

Make up your mind Rocco Baldelli! I feel like I’ve promoted a new Twins reliever each week since mid-March. The latest flavor of the week in Minnesota is Blake Parker, who could have some staying power in the closer role after notching back to back saves this week. Pre-2017, Parker was a middling reliever bouncing around a few different organizations and even missing the entire 2015 season due to injury. But once he got to the Angels in 2017, Parker became one of the most reliable relievers in the American League and combined for 22 saves in his two-year tenure with Los Angeles. Trevor May and Taylor Rogers will likely still receive some save opportunities, but Parker is the arm to own in the Twins bullpen for the time being. If you need saves, he’s a solid add.