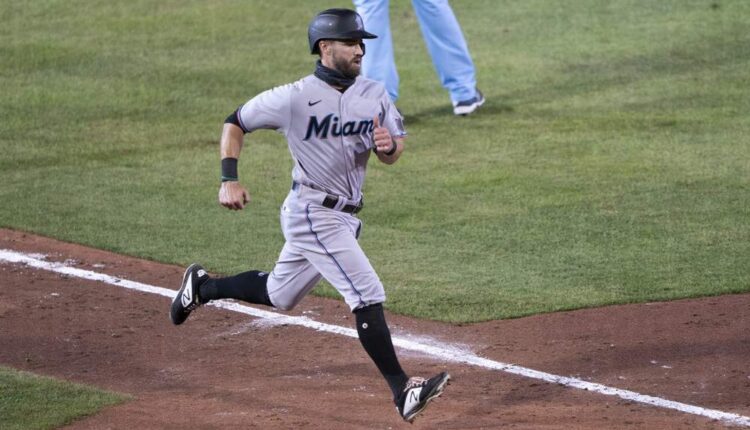 With June wrapping up, we are about halfway through the season. This week’s surprise performers article will look at five surprise/great performances from June. A little different from our usual weekly article, which will be back next week. When deciding which players to discuss, I looked for five standouts with questions about continued success. There were a lot of options, but we will stick with these five names to look back on as they had a monster June for your fantasy teams.

Harris was called up in late May and locked himself into everyday at-bats for the Braves. He hit safely in 24 of 27 games in June for an impressive .347 batting average. Harriss collected 13 extra-base hits, including four home runs and four stolen bases. His .228 ISO, .946 ISO, and 159 wRC+ are outstanding for his first entire month in the bigs. In addition, Harris showcased a near 11% barrel rate with a 38% hard-hit rate.

If we had to find something to be concerned with, Harris’s plate discipline would be. His plate discipline could improve as he walked 2.9% of the time while striking out nearly 23%. However, Harris had an alarming 46% O-swing and 14.6% SwStr, which give some cause for concern. Harris could see a prolonged slump if he does not improve his plate discipline. For now, though, he is producing in a big way and should still play nearly every day for the Braves. Eddie Rosario is back, but he should platoon with Adam Duvall for now. But there is something else to monitor as the Braves outfield is filling up with Ronald Acuña Jr. and Marcell Ozuna playing daily.

The second half of 2021 left many concerned with Garcia heading into 2022. So far, so good for the Rangers outfielder, and June was a big month for Garcia. He hit .314 with seven home runs and six stolen bases. In addition, he had a .267 ISO, .929 OPS, and 163 wRC+, producing for fantasy managers in a big way. Garcia even struck out only 25% of the time, which is not too bad for Garcia and the previous strikeout rates he has showcased.

Garcia is now hitting .246 on the season with 15 home runs and 12 stolen bases. His .220 ISO is excellent, while his .752 OPS and 110 wRC+ are respectable. Additionally, Garcia is striking out 27.1% of the time, which is still an improvement on his 31% rate last season. According to the BAT X, the rest of season projections have Garcia hitting .233 with 13 home runs and eight stolen bases. The power and speed are still excellent going forward, and if he can outperform that .233 average a bit, then he will be a fantasy gold mine this season. A potential 30/20 season could be in store for Garcia.

Most of us thought Drury would be just an injury fill-in for Jonathan India but little did we know that Drury would be the next best thing in fantasy baseball. In June, Drury hit .333 with eight home runs and even threw in a stolen base. In addition, Drury had a .294 ISO, 1.004 OPS, and 172 wRC+, making for one of the best fantasy players of the month. His plate discipline was also quite impressive, with a strikeout rate below 19% and a Z-contact of 91%.

Drury is now hitting .270 on the season with 17 home runs and two stolen bases. He has a .255 ISO and 131 wRC+, so he should not be losing playing time soon. The rest of season projection has Drury hitting 12 more home runs while hitting .252, which he may outproduce the way he is playing right now. Drury also brings multi-position eligibility to your fantasy team, making him an even better fantasy asset.

What a month of June for Berti. He sent fantasy Twitter a blaze as he took over everyday playing time with Joey Wendle and Brian Anderson hitting the IL. In June, Berti hit .297 with 18 stolen bases. He did not hit for power as he had zero home runs and a .079 ISO, but that was expected. Even without power, Berti still had a .737 OPS and 114 wRC+.

Berti continues to lead off for the Marlins and has 25 stolen bases. Look for Berti to get 40+ steals by the season’s end, especially if he continues to play every day. Playing every day could be a concern when the Marlins are fully healthy, but for now, they are not, which means it is Berti’s time. So enjoy all the stolen bases while we can.

Schwarber has been unconscious with the power, and June was no exception. He hit 12 home runs in June and even stole two bases. Schwarber had an insane .408 ISO, 1.065 OPS, and 187 wRC+. He even showcased his crazy OBP skills with a nearly 16% walk rate to go with all the power. Some may wonder how legit Schwarber’s power was, and a 27.4% barrel rate and 61.6% hard-hit rate support all the power.

Schwarber is now hitting .226 on the season, and the power has continued as he now has 27 home runs. He has a .314 ISO on the season with a 140 wRC+ while still walking 14.3% of the time. Schwarber is leading off for the Phillies, allowing him to continue producing significantly. Schwarber is joining his new digs in Philadelphia, and that should not stop anytime soon.