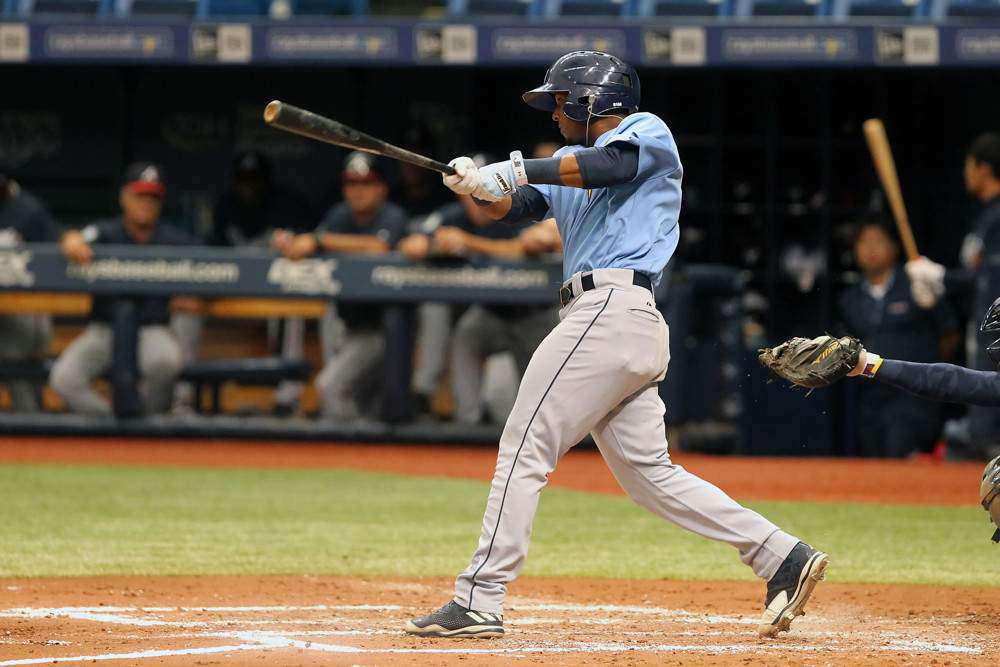 It’s hard to believe that the first month of the minor league season has come and gone. Damn that was fast. In a blink of an eye, Yordan Alvarez has mashed about 147 home runs and it feels like we’ve had just as many prospect promotions. While we didn’t have any big-time promotions to the Majors over the last week like we did in the previous prospects report, we did have some promotions down in the minors that are noteworthy and some positive news regarding injuries that I’ll get to below. But first, let’s check in with the new #1 overall prospect in my rankings (Once Vlad graduates), Wander Franco.

What’s Up with Wander Franco?

Now that all four of the prospects I had ranked ahead of him this spring are playing in the Majors, I figured we’d check in with the golden boy, Wander Franco.

After assaulting Rookie ball last season, the Rays bumped up the 18-year-old shortstop phenom to the Single-A Midwest League to start the 2019 season. After a small adjustment period, Franco returned to his usual dominant self and was one of the hottest hitters in the minors for a week or two. He’s cooled off a little since then, but is still slashing .286/.373/.500/.873 in his first 27 games. For a guy that is barely 18 and experiencing his first taste of full-season ball, that’s impressive. Oh yeah, he’s still walking more than he strikes out, currently sporting an 11.9% walk rate and a strong 9.3% strikeout rate.

With one of the best hit tools in the minors, lightning-quick bat speed, and phenomenal control of the strike zone, Franco looks like the kind of hitter that can continue to post low strikeout rates while hitting over .300 on a regular basis to go along with his power/speed upside. When I was recording the FantasyPros MLB podcast with Bobby Sylvester, he asked me who I thought was the next top prospect now that Vlad and company are up. The answer is Wander Franco.

After missing the first month of the season recovering from a wrist injury, Alex Kirilloff returned to action late last week for Double-A Pensacola and wasted zero time picking up where he left off last season. Kirilloff recorded two multi-hit games in his first five games back with two extra-base hits. Ho-hum. This guy could roll out of bed, grab some lumber and hit .300. Literally with any type of lumber. He could go grab a 2×4 from Home Depot and hit .300 with it. Kirilloff is one of the top pure hitters currently in the minors and has one of the highest floors as well to go along with his all-star caliber upside.

The month off doesn’t really change his ETA much at all in my mind. If the Twins are still in the playoff hunt come September and Kirilloff is doing typical Kirilloff things at the plate, adding his potent bat to their lineup for the stretch run will be quite enticing. There are a handful of prospects that can challenge Wander Franco for the title of new top dog in the minors and Kirilloff is one of them.

Nate Pearson Up to Double-A

On Monday, I posted a fun little tweet with my top-10 pitching prospects currently in the minor leagues (No Paddack, Soroka, Kopech, etc). For your convenience, as I know not everyone is on Twitter, I’ve posted that tweet below. Happen to see who’s at #9?

Been tinkering w/ my rankings. These are my current top-10 pitching prospects still in the minors. #MiLB

That’s right, Nate Freaking Pearson. I’m sure that’s his middle name, no need to fact check that. I honestly could’ve ranked him as high as 7th too. Pearson is an absolute beast on the mound at around 6’6/250 pounds and has one of the best fastballs you’ll see in the minor leagues, regularly hitting triple-digits on the radar gun. He’ll offset that gas with a plus slider with sharp break, an improving changeup, and a curveball.

While the entire arsenal as a whole is impressive, that fastball is truly a weapon. Not only does Pearson throw it with high velocity, his big frame and extension in his delivery also create a solid downhill plane. Throw in some arm-side run and it’s lights out for opposing batters. In the wise words of Metallica, “Sleep with one eye open, gripping your pillow tight.” There is a monster in your closest and he likes to be called Nate.

After dominating the Florida State League, the Blue Jays bumped Pearson up to the Double-A Eastern League where he made his first start last night. More domination ensued. Pearson finished with five shutout innings, allowing just two hits while striking out eight. On the season, he now has a 0.69 ERA, 0.58 WHIP, and 43/3 K/BB ratio in 26 innings. With his injury woes hopefully in the rearview mirror, Pearson looks poised to shoot up prospect rankings as one of the top pitching prospects in all of baseball.

Jo Adell (OF – LAA): We’re nearing the eight-week mark of Jo Adell’s 10-12 week timetable and finally have some good news in that he’s going to start running very soon. At this point, he’s likely going to be closer to the 12-week mark than 10, but I don’t care one stinking bit. Give him all the time he needs. No need to rush Adell back into action until he’s 110% healthy. All reports have been positive so far. Let’s hope it stays that way.

Carter Kieboom (SS – WAS): Well, that didn’t quite go according to plan. Kieboom hit a couple early home runs, but overall, his stint with Washington was a struggle, hitting .128 with a 37.2% strikeout rate in 39 at-bats. He’ll get some additional seasoning in Triple-A and should be back up this summer.

Corbin Martin (RHP – HOU): While most of the attention has been on guys like Whitley, Cease, and Luzardo for potential 2019 call-ups, Corbin Martin of the Astros has quietly been dominating at Triple-A Round Rock. After five innings of one-run ball last night, his season line now sits at a 1.48 ERA, 1.03 WHIP, 4.1 BB/9, and 10.4 K/9 in 24.1 innings of work. He should be up at some point this summer and has the potential to provide sneaky good value down the stretch.

Austin Riley (3B – ATL): While I’ve always liked Austin Riley as a prospect, I’ve been a little lower than most on him over the last 12-18 months. That’s mostly been because I’m not quite as high on his hit tool as others in the industry. I’m still not, but Riley has shown some improvements to start the 2019 season, hitting .300 while lowering his strikeout rate from 28.4% to 20.9% in 134 plate appearances. It’s a small, yet encouraging sample size.

C.J. Chatham (SS – BOS): Bobby Dalbec might be the big masher on this Double-A Portland team, but don’t you dare sleep on C.J. Chatham. The Red Sox 2nd round pick in 2016 has been on fire this season, hitting .337 with 11 doubles and a .831 OPS. Here’s what I said about Chatham this off-season:

“Chatham’s contact skills and feel for hitting make him a safe prospect with a reasonable floor. Chatham limits his strikeouts well and can use the whole field but can get a tad long with his swing at times and doesn’t create much loft. Still, he’s strong enough to develop double-digit pop to go along with stolen base totals in the teens. Chatham has displayed decent footwork and above-average range at shortstop and has a strong enough throwing arm to move to third if he’s forced off of shortstop.”

Skye Bolt (OF – OAK): You might have missed it if you weren’t paying attention, but Skye Bolt got promoted and then demoted back to Triple-A within a week. The 25-year-old outfielder with the 80-grade name should be back up with Oakland at some point this summer but isn’t a big dynasty league target and projects more as a 4th outfielder than a regular.

I’d like to start by admitting that I criminally under-ranked Dustin May back in the spring. Sorry Dustin. The 21-year-old right-hander with the flowing red hair is off to a strong start for Double-A Tulsa with a 3.25 ERA, 1.08 WHIP, 2.9 BB/9, and 10.7 K/9 in his first six starts. That strikeout rate is a big jump from the 7.3 K/9 he posted in his six Double-A starts at the end of last season.

May’s arsenal consists of four pitches, with three of them grading as above-average or better. His fastball sits in the low to mid-90’s with plenty of riding life and sink out of a low 3/4 arm slot. He changed from a four-seam grip to a two-seam grip last season, which led to a huge improvement in the effectiveness of his heater. Due to the run/sink on the pitch, May has routinely generated strong ground ball rates anywhere from 50-60% throughout his minor league career.

This right here is why this guy is so good. This is 97 with run from Dustin May. Insanity. pic.twitter.com/MRAt3AUDfj

Out of his three secondaries, May’s slider is the best of the bunch. He’ll throw it in the low-80s with big two-plane break that has proven to cause fits for both right-handed and left-handed batters. May’s changeup has lagged behind, but has shown improvement over the last year and has flashed above-average. If he can continue to develop that changeup, I like May’s chances of developing into a #2 or #3 starter. He’s also added a low-90’s cutter to his arsenal which has been a positive addition, especially against left-handed hitters when he’s commanding it on the inner half of the plate.

This spot will highlight some top prospect performances and trends throughout the season. 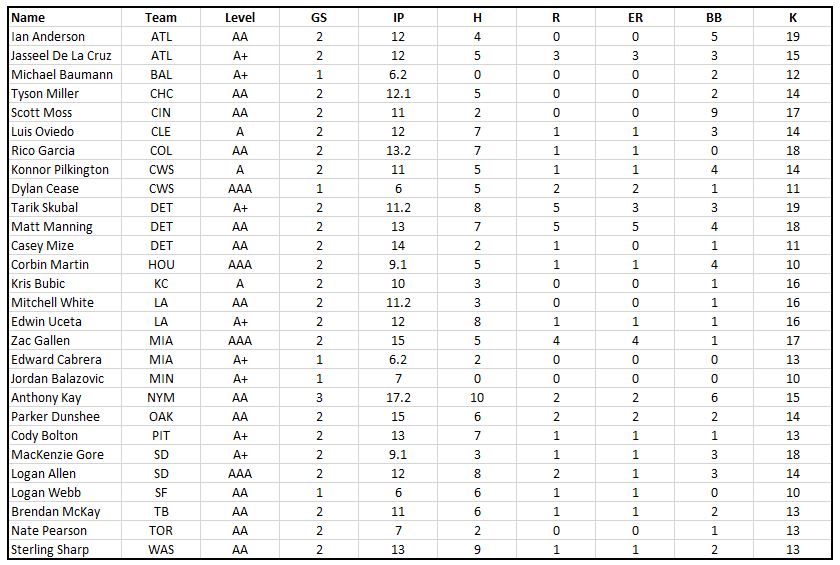 Prospects currently in the minors that can make the biggest 2019 impact. This is a combination of ETA and potential 2019 impact.