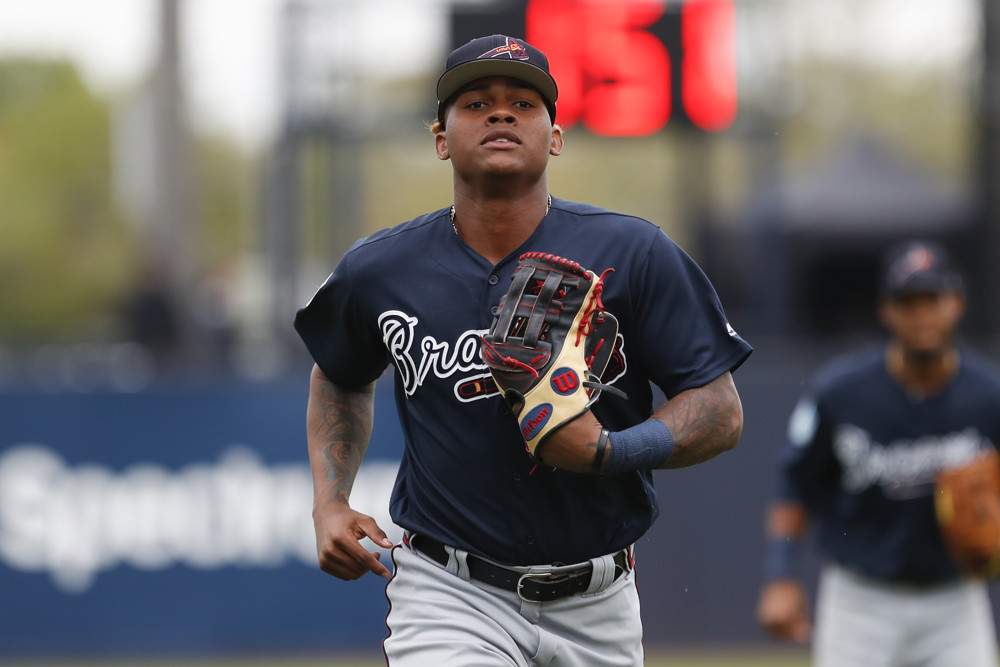 Promotions, promotions everywhere! Promotions as far as the eye can see. As you might be able to guess, the theme of this week is high-profile prospect promotions, mostly from Double-A to Triple-A. Atlanta went hog wild on Monday, promoting their top three prospects to Triple-A and giving us all a nice little kick in the ass to start the week. Those coming a few days after the Angels promoted my #2 overall prospect to Triple-A late last week. With som may promotions to discuss, let’s get right to it!

For those of that were hoping to see Jo Adell in the Majors this season, that’s now becoming more of a possibility. Who am I kidding, we ALL want to see Adell in the Majors. My #2 overall prospect got the bump to Triple-A late last week after slashing .308/.390/.553/.944 with eight home runs and six steals in 159 Double-A at-bats. He’s yet to record a homer or steal in Triple-A but is hitting .318 through his first six games.

If it weren’t for that knee injury in Spring Training, Adell might already be up with the Angels. He’s one of the elite few prospects that have plus or better grades on his hit tool, power, and speed. And his raw power is one I would even slap a 70-grade on. Those robust tools have led to per 600-AB averages of 80 extra-base hits, 26 homers, and 22 steals with a career .304/.370/.540/.909 slash line. Adell needs to be stashed in re-draft leagues right now. Long-term, there’s first-round fantasy upside due to his .300/30/30 potential.

It’s really not that surprising to see Nick Madrigal in Triple-A just 14 months after being drafted. He was arguably the most advanced hitter from the 2018 draft class with plus contact skills and elite plate discipline. Elite isn’t even a strong enough word. Since being drafted, Madrigal has accrued 589 plate appearance. Only 16 of them have ended by way of the K. 16! That’s an absurdly low 2.7% strikeout rate. While it takes some players just one game to strike out three times, it takes Madrigal around a month. There’s minimal power potential here, but Madrigals plus hot tool and speed will allow him to provide plenty of value with an early-2020 MLB debut very likely.

Alright, who gave everyone in the Atlanta Braves front office an espresso shot in their coffees Monday morning? What a way to start the week. In the span of a few hours, they promoted their top three prospects from Double-A Mississippi to Triple-A Gwinnett. Those three, of course, being outfielders Cristian Pache and Drew Waters, along with right-hander Ian Anderson. Another righty, Tucker Davidson, also got the bump up to Triple-A.

Let’s start with Pache and Waters. You’ll be hard-pressed to find a better outfield prospect duo in one system. The only duos that even come close are Kirilloff/Larnach in Minnesota and Kelenic/Rodiguez in Seattle. When you add in his gold-glove caliber defense, Pache is up there with the likes of Adell and Robert when it comes to outfield prospects. With his exceptional range and plus arm, there’s a good chance that Pache wins more than one gold-glove award in his career.

The offensive side of his game isn’t quite as advance at this stage, but there’s plenty of offensive upside here as well. Pache easily has plus speed, which he has utilized in the outfield, but has yet to develop and hone his baserunning skills. He’s been caught more times (11) than he’s been successful (8) this season and only has a 60.4% success rate for his minor league career. The speed is here for Pache to be a 30+ stolen base threat if he can improve his pitcher reads and really develop as a base stealer.

At the plate, his plus contact skills have been apparent throughout his minor league career and he’s shown at least average raw power with that power trending up over time, as seen below. Slowly but surely, his offensive game is catching up to his stellar defense, giving Pache all-star upside on both sides of the ball.

His Gwinnett outfield buddy might not be the same caliber defender, but man, can Drew Waters swing the lumber. Waters broke out in 2018, hitting .293with 39 doubles, nine triples, nine home runs, and 23 steals, and has been even better this season, currently sporting a .322 average. While his plus hit tool and speed have been apparent over the last year and a half, Waters raw power has struggled to translate into game power. With his raw power, I think Waters can become a 20-25 homer bat down the road, but he’s going to need to add some loft to his linear swing path for that to happen.

There’s a chance we could see Pache and/or Waters up with Atlanta this season with both debuting by mid-2020 at the latest. Just think about how exciting an Acuña, Pache, Waters outfield is going to be.

Lastly, we have Ian Anderson, one of the best pitching prospects in baseball. Drafting high school arms in the top-5 can be a risky proposition and most teams have avoided it for the most part. Tyler Kolek or Riley Pint anyone? However, sometimes it works out beautifully and you end up with a budding frontline starter like the Braves have with Anderson. Anderson has dominated at every level thus far after being drafted #3 overall in 2016 (One spot ahead of Pint), en route to a career 2.76 ERA, 1.21 WHIP, and 10.9 K/9 in 356 innings. With three plus pitches in his low to mid-90s fastball, curveball, and changeup, and solid enough command/control, Anderson has borderline ace upside and will make a formidable 1-2 with Mike Soroka soon enough. If Anderson isn’t up this season, he’ll be up in early-2020.

Patino will sit in the low to mid-90s with his fastball and can ramp it up into the 97-98 range. His heater has plus arm side run on it as well, making it an incredibly difficult pitch to square up. Both his curveball and slider are plus offerings with strong break on each pitch and his changeup is a serviceable fourth offering. You’ll notice a very athletic delivery when you watch Patino with a high leg kick that nearly mirrors MacKenzie Gore’s. Even with the higher leg kick, Patino has been able to repeat his delivery consistently and has clean mechanics. All the tools are here for Patino to develop into a strong #2 starter or borderline ace with high strikeout potential.

Before I get into Isan Diaz the player, did you happen to see the video of him hitting his first career home run while his father was getting interviewed? The reaction from his father is absolutely priceless. A real feel-good moment. Now, how about Diaz the player? After back to back seasons of hitting .222 and .232, Diaz really broke out this season in the Triple-A Pacific Coast League. I know, everyone basically has in that league, but it was encouraging to see Diaz hitting for a solid average again after doing so in the lower minors pre-2017. In 102 games, Diaz slashed .305/.395/.578/.973 with 21 doubles, 26 home runs, and five steals.

This type of power potential has always been lurking in Diaz’s bat, but his contact skills were putting a hard cap on that power. Until this season that is. Diaz began making more consistent contact and cut his strikeout rate down from 27.4% to 22.1% while still walking over 10% of the time. While I don’t project Diaz as a .300 hitter long-term, he should settle in as a .270 type with a strong OBP and 25-homer pop. Not an elite-level second baseman, but certainly one with some long-term appeal.

When I started writing this article, there was already a bunch of prospect promotions to talk about. Then Patino, who we discussed above, got promoted to Double-A last night and shortly after that, Riley Greene was promoted to the Single-A Midwest League from the short-season NYPL. Greene didn’t tear up the NYPL by any means, but held his own with a .295 average in 24 games. This is one of the best pure hitters from the 2019 MLB draft class so it will be interesting to see how he handles the Midwest League. Greene is my #4 overall prospect for FYPDs due to his plus hit tool and above-average raw power. He won’t steal you many bases, but Greene has legit .300/25 upside.

Let’s step away from all these promotions and talk about the turnaround of Forrest Whitley. Okay, maybe it’s a little too early to call it a turnaround, but Whitley’s last two starts certainly have been encouraging. After battling injuries and serious command issues for most of 2019, Whitley has looked like the Whitley of old in his last two starts, allowing two hits, one earned run, and two walks in nine innings while striking out 14. His command in these starts has shown much improvement and provides some much-needed optimism about his ROS and future outlook.

Coming into the season, Whitley was my #1 ranked pitching prospect. The struggles and injuries have dropped him behind McKenzie Gore and Casey Mize but Whitley still arguably has the highest upside of any pitcher in the minors. I’d highly recommend throwing some buy-low offers out there in dynasty leagues as I have a hunch the buy-low window will soon be slammed shut.

No, these aren’t rankings of what prospect have the best mustaches. These are the prospects currently in the minors that can make the biggest 2019 impact. This is a combination of ETA and potential 2019 impact.