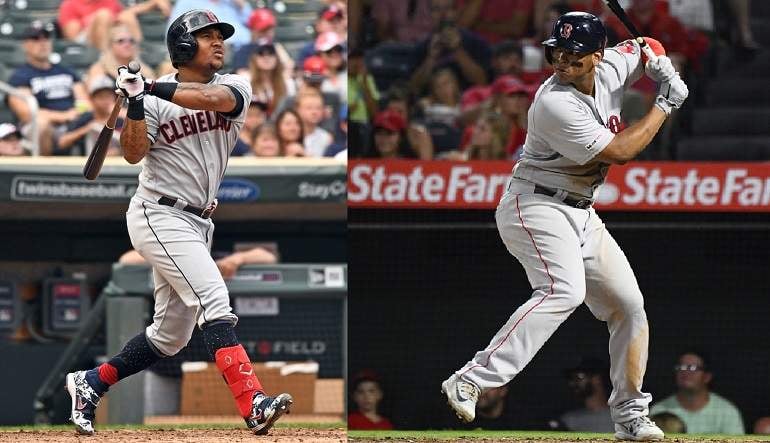 One of the greatest aspects of fantasy sports, and sports in general, are the debates. Whether you’re debating with a co-worker, significant other, friend, or even drunk Uncle Bob at the family reunion, the debates are endless. That’s what brings us here today. In the fantasy baseball world, player debates are everywhere, including in your own mind when trying to make that tough draft-day decision. Well, we’re here to help. Today we turn our attention to the hot corner where we debate one of the biggest headaches of the 2019 season and one of the biggest breakouts. It’s Jose Ramirez versus Rafael Devers. Ring that bell!

Jose Ramirez or Rafael Devers in 2020?

This was a difficult one for me. If you’ve been following our staff positional rankings, you’ll know I ranked Devers 3rd and Jose Ramirez 5th with Anthony Rendon sandwiched in between. All three are incredibly close and make up my second tier behind Nolan Arenado and Alex Bregman for 2020. If this question was asked a year ago, we’d get laughed at and have tomatoes thrown at us for even having this debate. But after Ramirez’s wildly inconsistent season and the rise of Devers, this has become a great debate.

There are a few reasons why I’m giving the edge to Devers here. First, he’s a safer option in my eyes. Yes, Ramirez’s first half of the 2019 season was the worst-case scenario. The seven home runs and 18 steals were nice, but the .218 average from a top-5 pick at the end of June made his owner’s stomachs turn. Then the 2nd half came along and Ramirez hit .327 with 16 home runs but only stole six bases. Ramirez’s contact metrics are solid, but at the same time, he’s never ranked high on the hard contact leaderboards and tends to get pull-happy at times, with a pull rate at or damn close to 50% in each of the last two seasons. In today’s game with all the advanced metrics and scouting going on, teams see that and adjust their defense accordingly.

The sliders above aren’t a perfect science but that red is a lot darker on Devers’ side, especially in the exit velocity department. Simply put, Devers is a better hitter right now and is just scratching the surface of his monstrous potential. As someone that saw nearly every Devers at-bat this past season, I can assure you that none of this is smoke and mirrors. There is no BABIP inflation here. Just simply a young player ascending to greatness. And while Ramirez has the edge in stolen bases, I’d feel confident in saying that Devers will lead J-Ram in the other four main hitting categories. He’s hitting in a better lineup, giving him higher R+RBI potential and his power is growing by the game.

I’m still a Ramirez supporter and will continue to pump him up in 2020, but if I have to pick between the two, give me Devers.

I already ate crow on the Devers breakout last season, waiting a year too late for the breakout. His consistent, hard contact fueled a .311 average with a 93rd percentile .295 XBA. The only hole there is to poke in his profile is his mediocre 50% SB success rate on 16 steal attempts. His odds of stealing double-digit bags are about the same as me landing a date with Alexandra Daddario.

It’s impossible to wash the putrid taste of Jose Ramirez’s .652 first-half OPS out of our mouths. Even while he was lost at the plate, his expected metrics pointed towards positive regression. Sure enough, he posted a 1.105 OPS over the second half and looked like the JoRam of old. His season-long .274 XBA was still well above his .255 average, but the reason I’m taking him over Devers is the 24 steals in 129 games. Even in what was essentially the worst-case scenario for JoRam, he still went 23/24/.255. With steals more valuable than ever, the chasm in that category is an easy difference-maker for me.

I actually have these two players back to back in my ranks and even in the same tier at third base. With that said, I still prefer Jose Ramirez to the likes of Rafael Devers. There are a couple of reasons for this. The first is simply the track record. Although we saw Ramirez struggle for a full season when combining the two putrid halves, he still sustained some sort of value due to the stolen bases. He bounced back in a big way in the second half of 2019 but it was cut short due to injury. If he completed the second half I fell the conversation between these two would not be so close. Devers had the breakout and has the pedigree. I buy into it for the most part but there are a few things that keep me concerned.

Since July 4th, José Ramírez has driven in 43 runs, which is the most in baseball.

This leads me to my second reason, Devers has some plate discipline metrics that concern me. He had a career year without a doubt. One glaring concern is that the chase rate jumped to 40%! That type of chase rate would typically suggest bad outcomes. However, he improved the O-contact rate with it. So why am I worried? If that contact rate falls even a bit from what he gained, you’d lose a bit of batting average and could lead to increase K-rate. That could very well happen. Also, there’s a chance the Red Sox sell off parts around him and the crazy counting stats take a big hit. I just expect regression to occur and I ultimately prefer the proven commodity in Ramirez.

Jose Ramirez and Rafael Devers are two of the top third basemen, going behind Nolan Arenado, Alex Bregman, and Anthony Rendon in our consensus rankings. While Ramirez is considered one of the elites in that tier, I firmly believe Devers has joined them and even surpassed Ramirez. Last season, Ramirez was a top-five pick coming off a season in which he hit 39 home runs and stole 34 bases. Much of that 2018 production came in the first half as his well-documented struggles in the second half carried over to 2019. A second year of declining average and a year-long slump gives me reason to question how much we can trust Ramirez.

Devers broke out in a big way last season hitting .311 with 32 home runs and eight stolen bases. His 55 doubles led all of MLB third baseman and helped him achieve a .555 slugging percentage, well above Ramirez’s .479. Devers cut down on his strikeout rate from 24.7% in his first full season in 2018 to 17% in 2019. Everything about Devers’ underlying metrics says that he is legit with a .295 expected average and exit velocity in the 94th percentile. At just 23 years-old, Devers is on his way to becoming the next Rendon. If given the choice between the two third basemen in 2020, I’m taking the young Red Sox phenom.

I am going to take Rafael Devers here every time. Devers took a huge leap forward last season and proved he can be an offensive stud. He led all of baseball in hard-hit balls and finished among the league leaders in several other offensive categories. Devers will generate a ton of counting stats in a potent Red Sox lineup. While he will never be prolific on the basepaths, I think he has a chance to steal 12-15 bags. But the biggest reason I will choose Devers over Jose Ramirez is the latter’s lack of consistency. If I knew we were getting 2018 first half Ramirez or 2019 second half Ramirez, I might have a different answer. Ramirez is like the crazy ex who made you question your sanity and moral compass at points in the relationship. Give me Devers and I will rest easy at night.

Third base is one of the deepest positions in fantasy baseball and at the top, we have two players who get to their value in vastly different ways. Just a few years ago, Jose Ramirez looked to be a threat to Mike Trout’s crown as the perennial top pick in the draft but he regressed significantly in 2019. On the flip side, Rafael Devers broke out in a big way in 2019 and looks like a true star in the making.

For 2020 though, I’m taking the side of Ramirez. As has been a theme for me in my roster building in recent seasons, I think the value of a stolen base in the current environment is massive and getting a true 25/25 threat like Ramirez is too good of a proposition to pass up. Ramirez possesses true top-five upside that I don’t think Devers has due to his lack of steals and for that reason, I’ll be taking my chances on a bounce back from the Indians’ third baseman in my drafts.

A bad first half won’t make me quit on Jose Ramirez, especially when he went bonkers in the second half. Sure, as a J-Ram owner, I will admit that I was considering trading him at an 80-percent value in June, but thank God I didn’t. He went on to hit .327/.365/.739 with 16 homers and a 1.105 OPS after the All-Star break after a dismal first three months.

Rafael Devers is a fine young man, very good at smashing baseballs. A .311/.361/.555 line with 129 runs is nothing to sneeze at. However, let him prove he can mash without the “juiced ball” first before considering grabbing him ahead of J-Ram. The Indians’ infielder has actually done it in the past.

It’s close, but give me Ramirez over Devers any day of the week. I won’t ever forget how he contributed in steals even in the worst of slumps, with 18 thefts in the initial half.