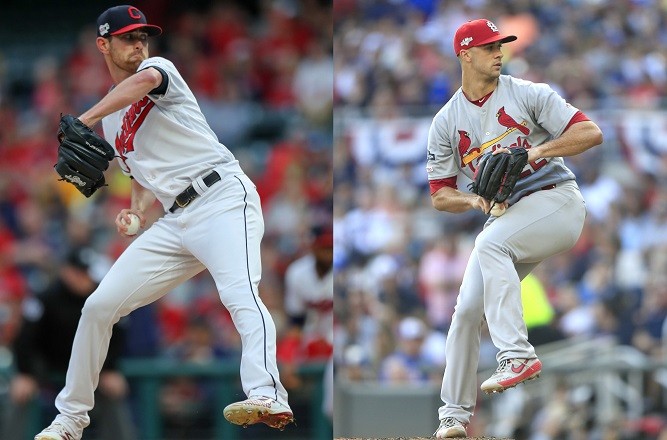 One of the greatest aspects of fantasy sports, and sports in general, is the debates. Whether you’re debating with a co-worker, significant other, friend, or even drunk Uncle Bob at the family reunion, the debates are endless. That’s what brings us here today. In the fantasy baseball world, player debates are everywhere, including in your own mind when trying to make that tough draft-day decision. Well, we’re here to help. After debating who should be the top pick in fantasy drafts, we move to the mound today to debate two of the biggest breakout pitchers from 2019: Jack Flaherty and Shane Bieber.  Let’s debate!

TALE OF THE TAPE 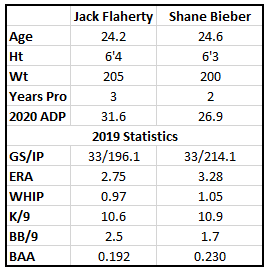 Shane Bieber or Jack Flaherty in 2020?

To be honest, I didn’t think we’re be having this discussion in 2020 when 2019 started. At least not with both Jack Flaherty and Shane Bieber being considered fantasy aces and top-10 starters for 2020. Both have an ADP within the first three rounds in the second tier of starters that includes Mike Clevinger and Stephen Strasburg. This is the tier I usually find myself taking my first pitcher in so far in all the 2020 mocks I’ve done. In fact, I have a share of all four of these guys in at least one league so far. But the question remains, Biebs or Flaherty?

To me, I like to go with a safe pitcher as my ace, and that is Bieber. I’m not saying Flaherty isn’t safe, because he is, but the massive swing from the first half to the second half does leave me at least a little concerned about consistency moving forward. After the first half of the 2019 season, Flaherty’s ERA sat at 4.64 before going all beast mode on the league with a 0.91 ERA in the second half. Yes, that’s a sub-1 ERA. Bieber, on the other hand, never had an ERA above 3.68 in any month and was one of the most consistent pitchers in baseball last season.

Shane Bieber was incredibly consistent in 2019 month to month. Never posted an ERA above 3.68 or a K/9 below 9.6 & had a BB/9 below two in 5/6 months. Not the flashiest guy around, but this upside and consistency is what you want from your #FantasyBaseball ace in 2020. pic.twitter.com/rQIaciovib

If we’re talking strictly upside, these two are very close and I might even give the slight nod to Flaherty. He has one of the best fastballs and best sliders in the game, and really has a chance to strikeout 10-plus in any start. Bieber’s arsenal isn’t quite as dynamic, although he has a nasty curveball, but the pinpoint command and control of a very good arsenal inspires a ton of confidence that he’s not going to have any prolonged rough patches. I’ve been targeting both of these arms in every draft I’m in, but if I’m on the clock and have both Flaherty and Bieber on the board, I’m siding with the Biebs.

Flaherty? More like Flatulence! He stinks! Of course, I am joking. I would be pleased as punch to own either (or both) of these arms in 2020. However, for the sake of this debate, I’m going Bieber. Bieber was more consistent in 2019 and features elite command that edges out Flaherty. Flaherty also far out-performed his peripherals, with a 2.75 ERA but a FIP, xFIP, and SIERA all ranging between 3.46-3.68. Bieber needed no such luck, as his 3.28 ERA was right in line with his peripherals ranging from 3.23-3.36. I’m old enough to remember Flaherty’s 4.64 first-half ERA compared to his 0.91 ERA after the All-Star break, an incredible run that is essentially unrepeatable.

Over the course of the second half of the season, there were few pitchers better than Jack Flaherty. The Cardinal’s right-hander was essentially perfect and was easily a difference-maker for fantasy owners. The uptick in success coincided with a massive change in pitch usage as his four-seam usage dipped every month from June on. The change led to an uptick in slider usage which is easily his best pitch based on whiff rates. While it is impossible to think he could repeat the success from last season’s second half, the changes are real and should lead to continued success for 2020. While Bieber is a budding fantasy ace himself, Flaherty showed incredible growth over the course of the last season and he is my preference of the two.

Don’t get me wrong, I love Bieber. I think he is a fantastic fantasy pitcher: durable, young, with lots of Ks and a fantastic WHIP. However, if it is my turn to draft and both are available, I’m taking Flaherty, the man with the crazy-good upside.

Shane Bieber and Jack Flaherty, both 24-year-old breakouts, are primed to be aces for fantasy baseball teams next season. If faced with the decision while on the clock, I’m taking Shane Bieber. Bieber finished the season with a 3.28 ERA and 259 strikeouts in 214.1 innings. One of 12 members of the 200 innings and 200 strikeouts club, only Justin Verlander threw more innings while Bieber was fifth among that group in ERA. What separates Bieber is his impeccable control, walking only 4.7% of batters, good for eighth in baseball among all pitchers with at least 100 innings pitched. Pair that with a 30.2% strikeout rate supported by a 14% swinging-strike rate, and you’ve got real makings of an ace.

That’s not to say Jack Flaherty is a slouch. Flaherty had one of the best second halves in all of baseball with a 0.91 ERA. This came after putting up a 4.64 ERA in the first half which included a 7.01 ERA in June. Bieber was much more consistent on the other hand, never having a month in which his ERA was higher than 3.68. If the decision is a close one for you consider this, Bieber gets to feast on the AL Central division that includes the Royals and Tigers. While the White Sox, while improving, still had a propensity to strike out with a 25.6% strikeout rate as a team that was third-highest in baseball. Do yourself a favor and catch the Bieber fever.