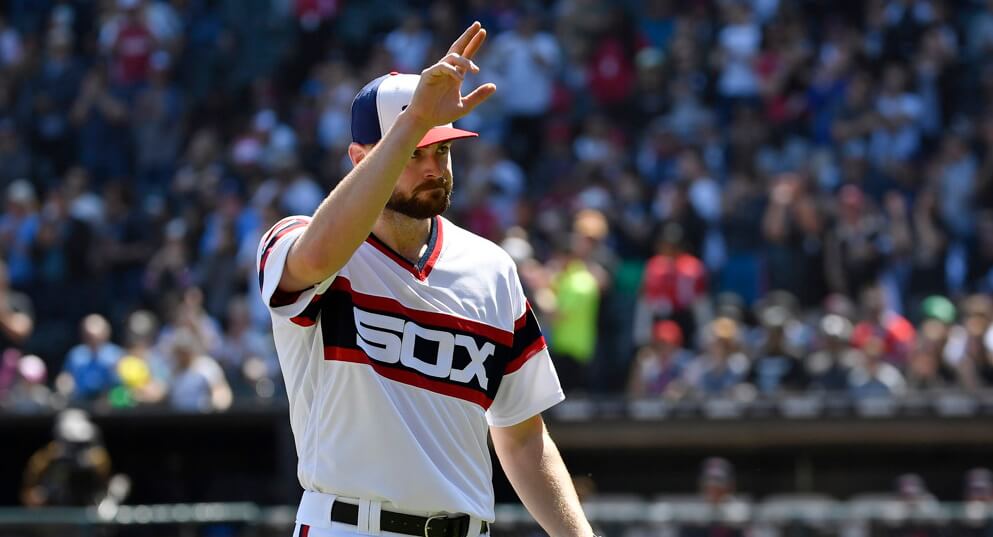 One of the greatest aspects of fantasy sports, and sports in general, are the debates. Whether you’re debating with a co-worker, significant other, friend, or even drunk Uncle Bob at the family reunion, the debates are endless. That’s what brings us here today. In the fantasy baseball world, player debates are everywhere, including in your own mind when trying to make that tough draft-day decision. Well, we’re here to help. Today, we discuss two of the more intriguing starting pitchers for 2020. It’s 2019 rookie phenom, Chris Paddack, squaring off against former top prospect and 2019 breakout, Lucas Giolito.

Lucas Giolito or Chris Paddack in 2020?

At one point, I was very high on both Lucas Giolito and Chris Paddack when they were prospects.  In fact, I once ranked Giolito as the top pitching prospect in the game back before I joined Fantrax. So why have I been so slow to come back around? Command. That’s something that Giolito has struggled with dating back to his days at a prospect. Paddack? Not so much. Yes, Giolito made some adjustments and improved exponentially in 2019, but are we forgetting he was literally the worst pitcher in baseball in 2018 and not drafted outside of the Giolito family fantasy league? And even there he was a late-round flier.

I’m not saying Giolito is going to regress back, but I’m just not 100% sold on him as a borderline ace pitcher. Even last year, he wasn’t exactly consistent, posting an ERA over 5.00 in three of six months. Paddack, on the other hand, has always shown plus command and control over his arsenal which has allowed him to remain much more consistent throughout his professional career. You can say what you want about him being a two-pitch pitcher, but those two pitches are plus to double-plus offerings and he’ll at least mix in a curveball around 10% of the time. While their upsides are pretty close, Paddack feels like the safer option to me in 2020.

You can’t argue with the success Lucas Giolito had in 2019. He revamped his entire delivery and changed his pitch mix, going from the worst starter in baseball in 2018 to a borderline ace. That said, his fly ball tendency tended to bite him at home as he suffered a 1.49 HR/9, leading to a 4.06 ERA. I wouldn’t expect that to change in 2020. He also faded down the stretch, as he posted a 3.76 ERA over the second half and finished the season on the IL with a lat strain.

Chris Paddack gets a bad rap because he relies mostly on his split-change to keep batters off his fastball, but it is a great pitch. He does also have a curveball, but it isn’t an effective option. Typically I veer away from two-pitch starters, but Paddack has such elite command that I believe he can get away with two strong pitches and a fringy third option. He shouldn’t have any innings restrictions after being shut down at 140.2 innings in 2019, so I’ll take that elite command and consistency over Giolito for 2020.

I do like Chris Paddack a lot for 2020 but he still is not ranked ahead of Lucas Giolito for me. We saw the full-on breakout of Giolito in 2019 and we are hoping for Paddack to even offer that type of year in 2020. Instead of taking a guy hoping for him to hit on that upside I’d rather take the guy who has done it and is coming into a second season to build off the success.

Another factor in Giolito’s favor is the signing of Grandal. This is a huge boost to any pitcher. Mix in the fact that he gets to pitch in, what I would say, is the best division in baseball for pitchers. This is due to the lack of high-end offenses in the division. Other than the Twins, there is little to be concerned with as far as lineups are concerned there. This should lead to a better chance at a higher win total and like it or not, win potential is a factor in fantasy baseball. I expect Paddack to take another step but I expect Giolito to sustain what he’s already proven and give me the proven, or more proven, commodity every time.

Lucas Giolito and Chris Paddack are two young pitchers vying for ace consideration going into 2020. Paddack was the shiny new toy out of the Padres’ system. Giolito was the former first-round pick many gave up on as he struggled to live up to expectations. Both had successful seasons in their own right. The future looks bright for each but in 2020 I’m taking Giolito.

The pitcher with the high pedigree, there was a bit of fatigue with Giolito. But he put it all together for a great season of a 3.41 ERA supported by a 3.43 FIP. Meanwhile, Paddack finished the season with a 3.33 ERA but a 3.95 FIP suggests he didn’t pitch as well as the results indicated. Giolito also had more success in the strikeout department with 228 strikeouts in 176.2 innings. His 15% swinging strike rate supports that nicely. Paddack will be another year removed from Tommy John surgery but still only pitched 140.2 innings. If one of these pitchers have a chance at 200 innings and 200 strikeouts, I think it’s Giolito.

Lucas Giolito was a top-20 starting pitcher in 2019 after leading the league in runs allowed the year prior. His breakout coincided with a change in his approach on the mound. Giolito scrapped his traditional sinker and reduced the usage of a middling curveball. He wisely increased the number of changeups he threw, and it made a world of difference. Giolito struck out over 32 percent of batters faced while allowing hard contact on less than 35 percent of batted ball events. Based on his revised approach, I believe the strides he made last season are highly sustainable going forward. That is why I would prefer him to Chris Paddack in 2020 drafts.

Paddack had a great rookie season, but the limits placed upon him prohibited him from being an elite fantasy performer. He averaged just over 5.1 innings per start and had just nine wins last season. While wins is a flawed stat, Paddack’s 5.88 strikeouts per start were lower than Madison Bumgarner’s. The Padres plan on removing the kid gloves from Paddack, but I still think his opportunities for wins and strikeouts will be somewhat limited. I would also like to see him develop a third pitch. His curveball was by far his weakest offering. Opponents hit .267 off the curve compared to .204 on the fastball and .187 against Paddack’s stellar changeup. These factors make him a bit of a risk as an SP2 for me.

While I believe in the talent level of Paddack and am a sucker for any pitcher with a high-level change up, I think Giolito is the better pick for 2020. As of right now, I view Paddack as a two-pitch pitcher with hype that will exceed his fantasy utility. Giolito has the skill set of a fantasy ace and I believe the changes he made are for real. I also tend to heavily favor guys who once ranked in the top 10 of prospect lists and think the ceiling with Giolito is too much to pass up. With the White Sox on the rise after a flurry of offseason moves, I’ll be betting on the power right-hander from Chicago this season.

Both Chris Paddack and Lucas Giolito took significant steps forward in 2019. The former had an awesome debut in the bigs, and the latter finally turned the corner after a couple of disappointing seasons. I want them both on my team but if I’m forced to choose, I’ll lean to Giolito’s side. The Chicago White Sox ace has three pitches with at least a 26.0 whiff rate: his four-seamer (26.0) his slider (42.0) and his changeup (41.3.) Paddack has his changeup (29.2,) which is an elite offering, but his fastball (23.4) and curve (17.0) don’t match Giolito’s bat-missing profile.

The San Diego Padres’ young righty relies on his change and in fastball command to get by, and it worked wonders in the first half (2.84 ERA.) Big league hitters started to figure him out some after the break (4.01 ERA) and he will need to trust his curve more. Paddack’s curve spin ranks in the 11th percentile. Hitters slugged .444 against the pitch. If he shows enough improvements with it, he could leapfrog Giolito but for now, I prefer the safer, more consistent former Nationals prospect.