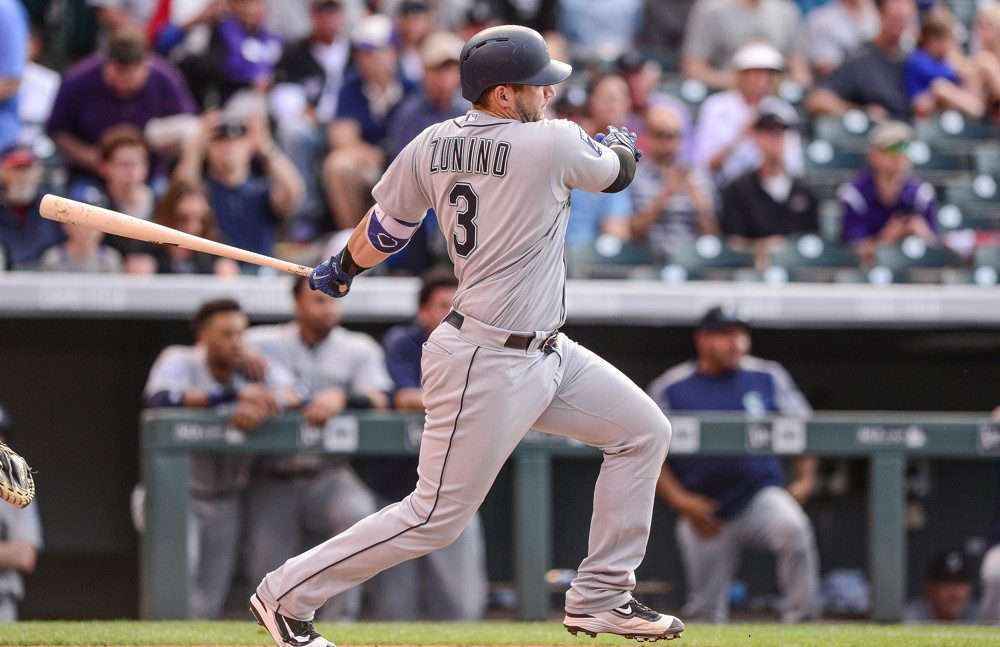 One of the most enjoyable parts of fantasy sports in debating which players are better than others. We’ve all done it. You’re hanging out with some friends, probably enjoying a beer or two, and you get into a long discussion over which player is better than another one. Sometimes it might get heated, but that’s okay. We aren’t all going to agree on every single player. That would make fantasy leagues incredibly boring.

The same can be said here at Fantrax. We have a great group of writers and podcasters (that might not be a word but who cares) who are all very knowledgeable, but we don’t always agree. So we figured we’d have some good ol’ fashion debates about two players that are close in potential 2018 fantasy value.

With a career strikeout rate of nearly 34% and coming off the worst contact season of his career, I have some skepticism of Zunino’s reliability. He will not come anywhere near repeating his .355 BABIP from last season, and as a strikeout-prone, fly-ball hitter, he cannot be expected to offer anything in the batting average department. That said, I will still take him over Grandal, whose plate discipline cratered last season.

They are actually pretty similar players: high-strikeout, low line-drive hitters who rely on home runs to prop up their fantasy value. Zunino has consistently offered slightly higher exit velocities than Grandal, and he is nearly three years younger, likely entering his prime at age 27. That said, the real separator for me is simply opportunity: Dodgers’ catcher Austin Barnes was sensational in his limited time last season, and it was Barnes who got the start in all seven games of the World Series.

Given our most recent evidence, Barnes appears to be the favored option for manager Dave Roberts, and the two seem likely to split time fairly evenly out of the gates. Zunino, on the other hand, stands opposed by only veteran minor-leaguers Mike Marjama and David Freitas on the 40-man roster, so, even given his offensive uncertainties, he figured to have a fairly long leash in Seattle.

If Grandal ends up traded to a team with more consistent playing time available, I may be inclined to change my pick, but, as things stand, I would take Zunino of these two.

At first glance, Mike Zunino and Yasmani Grandal are similar fantasy catchers. They both have plus power and strike out more than a drunk jerk hitting on a nice girl at the club. Yeah, every now and then their cheesy pick-up lines work and they end up scoring, but more often than not, they get a cheap beer or a mixed drink poured on their head.

Everything about his 2017 season screams that regression is coming in 2018. And not just a normal scream — one of those horror movie type of screeches. I’m letting him be someone else’s headache this season.

Grandal has his own concerns to worry about in 2018. Mainly, Austin Barnes. However, I find it very hard to believe that one bad month from Grandal is going to cost him his job. Barnes will be a factor, sure, but I still expect Grandal to get the bulk of the catcher at-bats for the Dodgers this season.

In 2017, Grandal has a .247 average and 22 home runs. However, he didn’t need an inflated BABIP to hit around .250 like Zunino did. His .297 BABIP in 2017 and much better batting average track record makes me much more confident in his 2017 average than I am with Zunino’s. The power will likely be similar, but the batting average sways me over to Grandal in this debate.

It almost feels too good to be true. On the back of a 25-homer season, it might sound weird to label 2018 as Zunino’s “make it or break it” year, but that’s exactly what this is. Success for Zunino has come far and few between, and as a former first-round draft pick, sustainability certainly hasn’t been a common trait throughout his five-year career, either.

So what exactly does this season hold?

Zunino finished with a strong batted ball profile in 2017, and his 24.0% HR/FB rate was on par with guys like Bryce Harper and Marcell Ozuna. It’s tough to see him repeating a 38.6% hard-hit rate, however, and even though Zunino’s .251 average was impressive, even that number is hard to replicate.

What owners can bank on, though, is more of the same home run and power production. Zunino was lights out when ahead in the count 1-0, hitting eight home runs and also going on to earn 31 total walks. If he can adjust to off-speed pitching, something Big Z swung at 61% of the time, that nasty 36.8% strikeout rate could drop rapidly.

If you’re looking to invest in the 26-year-old, you have every right to feel wary. It’s a small sample size of success, but Zunino is now a top-10 catcher that won’t necessarily cost a top-10 catcher price.

I am NOT getting sucked in by Zunino again. Drafting Mike Zunino is like doing the 20-piece challenge at McDonald’s. If you’re not familiar with that, it’s where you and your buddies each order 20 McNuggets and then order other items off the menu to see who can eat more. It sounds like fun and you think your day is going to end in sweet, glorious, barbeque sauce drizzled victory. Instead, it ends in misery and an extra 15 minutes on the john. I’m so done with Zunino.

Meanwhile, reports of Grandal’s demise have been greatly exaggerated, and the hype on Austin Barnes is already out of control. Do you really think one of the best offensive AND defensive catchers in the game is just going to disappear? Yes, he pulled a disappearing act in the second half and lost some of his discipline at the plate, but I’m confident he can find himself again and give you the simliar power to Zunino with better a AVG/OBP.

This one is pretty much a no-brainer for me, despite the fact that his ADP alone makes it seem like Mike Zunino is the much better player. 2017 was certainly a better year for Zunino, but it was by no means a “real” breakout. You may point to the .251 average or the 25 home runs and be excited for what’s to come for the 26-year-old. But the truth of the matter is far grimmer than could be expected.

Zunino’s .251 average is a full .037 higher than his previous high in the majors, and this time around it was aided by an insane .355 BABIP (a full .088 points higher than his previous high). He didn’t manage to put the ball in play much, either, as he set a new career high in K% at an astounding 36.8%. We know only two nice things about Mike Zunino: he’s going to hit for power, and he’s going to walk. Aside from that, the rest is more likely to be a train wreck than a repeat of 2017.

On the other side of the coin is Mr. Consistency Yasmani Grandal. Since his first real full season in the Majors in 2014, he’s averaged 452 plate appearances, 20 homers, and a .234/.331/.437 slash line, with those home run totals being 27 and 22 in 2016 and 2017, respectively. The Yasmanian devil is not an elite player by any means, but he’s a solid pitch framer, throws out a decent number of would-be base stealers, and he’s just now 29 years old.

I know the power potential for Mike Zunino is super enticing, but to be honest, Grandal’s power has been nearly the same, and he’s done it without striking out every third at-bat. This victory goes right to Yasmani Grandal for me.

Thank-you for reading and we hope you can use this article to your advantage and get a leg up on your fellow league members.  Got a question that we didn’t cover here? Then follow us on Twitter (handles above) and ask there.