For those of you in re-draft leagues, you’re probably hearing crickets in your leagues right now. No baseball means not a whole lot of action in yearly leagues as no one knows when we’re going to get this 2020 season started. That’s somewhat true in dynasty leagues as well, but to a much lesser extent. We can always be tinkering, making trades, and trying to improve our rosters for the present and for the future. That’s where this article comes into play. One vital part of dynasty leagues is acquiring rising talent for a good value. Or at least, at a value that will eventually look like a bargain. The below handful of players aren’t sleepers or off the radar by any means, but are guys I expect to continue increasing their dynasty stock and rise further up my dynasty ranks in 2020.

These are the outfielders I’m trying to acquire as many shares as I can in dynasty leagues.

By this point, everyone knows about the tear Eloy Jimenez went on to finish the 2019 season. In August and September, Jimenez mashed 11 doubles and 14 home runs across 52 games while hitting a robust .308. Finally, right? We had been waiting for Jimenez to fully break out and he did just than over the final third of the season after a very inconsistent first four months with three of those months ending with a sub-.250 average and two below the Mendoza Line. Basically, outside of June, he was a disappointment for his fantasy owners through July.

Now, what can we expect from Mr. Jimenez moving forward? Honestly, he’s not far off from Pete Alonso moving forward. In fact, basically every prospect list around ranked Jimenez far ahead of Alonso coming into 2019. For me, Alonso sat in the 20-30 range while Jimenez was a locked-in top-10 dynasty prospect. But when one of this duo flat-out mashes for the whole season and finishes with 52 homers, it’s easy to see why he’s more highly-regarded at the moment. I expect this to correct itself moving forward. That’s not to say Alonso is going to trend down, but rather, I expect Jimenez to continue trending up and put himself right on Alonso’s level as top-25 caliver dynasty assets.

With all that said, we can’t overlook some of the concerns surrounding Eloy’s batting average and OBP moving forward. Sure, he hit .308 down the stretch and was a .311 career minor league hitter, but his contact skills don’t signal that type of average is sustainable moving forward. During his prospect days, Jimenez displayed an above-average hit tool but also didn’t walk a whole lot, posting just a 6.8% walk rate. On the other side, you have to be impressed with 18.3% strikeout rate from a slugger with his type of power.

I’m not saying Jimenez is going to be a Joey Gallo type of slugger, but he’s more of a .270-.280 hitter than one that will hit over .300 annually. The reason I’m not putting him down in Gallo’s level despite mediocre contact rates in 2019 is the fact that he doesn’t really have any major holes in his swing or struggle against a certain type of pitch. As you can see below, Jimenez handed breaking and offspeed pitches fine last season with his wOBA against each not too far below his mark against fastballs.

Back to the power, it’s freaking majestic. Jimenez possesses elite raw power that is nearly on the same level as Alonso’s. “But why did he never post big home run totals?” Great question. While Jimenez’s raw power cannot be questioned, a lower flyball rate did limit his in-game power. The highest flyball rate he’s had at any level was a 37.6% mark in 228 Double-A plate appearances in 2018 and was under 30% with the White Sox. To reach his lofty 40-plus homer potential, he’s going to need to improve that rate and add loft to his swing. The Major League average launch angle was 11.2 degrees in 2019 which was nearly two degrees above Jimenez’s 9.3 degree mark. With some added loft, 40-homers annually should be the norm for Jimenez.

Long story short, I expect him to catch up to Alonso value-wise in the very near future.

After the dominant stretch he had in the middle of 2019, it’s a tad surprising to see Ramon Laureano with an ADP around 100 in Fantrax drafts. Sure, he had the injury down the stretch and missed crucial time during the most important part of the fantasy season for us, but we can’t forget that Laurano was a borderline top-25 fantasy asset for roughly 1/3 of the season. After a rough April, Laureano combined to hit 83/273 (.304) with 51 runs, 18 home runs, 47 RBI, and nine steals in May through July before the stress reaction in his leg on July 30th. That’s damn close to a .304/110/40/100/20 which would put Laureano in first-round consideration. Obviously it was just a few months, but those few months showcased how valuable he can be to a fantasy team.

Statcast data is solid and there's more SB in those legs too. Great value at his current ADP.

Losing someone that hot that was likely keeping many teams afloat while big names were injured or slumping was a major blow. I would know as I rostered Laureano on nearly half my teams last season. And you know what? I’m rostering him a ton again this season. Not on half my teams as the fantasy world is well aware of him now, but still, this is a phenomenal power/speed target around pick 100.

When looking at his Statcast data, nothing offensively jumps out at you, but he posted 60th percentile or better in xBA, xSLG, and xwOBA while having an 84th percentile sprint speed. It’s fair to expect a slight drop in power, but at the same time, I truly believe there are more stolen bases in those legs. Laureano has a real chance to post a .280/25/25 line and finish as a top-50 player this season. This is the definition of a rising fantasy talent.

Mercado was one of the more pleasant surprises when it came to rookies last season. In 115 games following a mid-May promotion, Mercado hit .269 with 15 home runs and 15 steals and added another four dingers and 15 steals in 30 Triple-A games. The 19 combined home runs marked the most of Mercado’s career for a single season and marked only the second time he’s been in double digits, previously topping out at 13 in 2017.

Don’t let the power spike fool you into thinking he has the upside for more though. Mercado benefitted from the juicy ball in a big way with his estimated fly ball distance jumping way up to 311.6 feet in the Majors after never being higher than 291.4 feet in the minors. Beyond that, Mercado registered a 16th percentile exit velocity, 24th percentile hard-hit rate, and 24th percentile xSLG. Those don’t exactly inspire much confidence in his power moving forward. It’s fair to project him to remain in the teens for homers annually moving forward, but I’m not anticipating him getting up above 20.

What we can expect is more speed though. Mercado averaged 50 steals per every 150 games in his minor league career and has been above 29 every full year in his professional career starting back in 2014. His success rate sits at a modest 71.4% but has improved to 75.5% in 2018 and 80.5% in 2019 between Triple-A and the Majors. Cleveland has run a ton over the last two seasons finishing 1st in steals in 2018 and 6th last season, so as long as Mercado can remain efficient, he should get the green light often. There’s 30-plus steal upside in Mercado’s legs to pair with homer totals in the teens and a batting average in the .260-.270 range. A .260/15/30 season would make him a top-100 asset and there might even be upside for a tad more.

There’s a lot to like about Franmil Reyes in 2020. Outside of having a sick nickname like “The Franimal”, Reyes has massive offensive upside and enters 2020 with a full-time locked-in starting gig on opening day for the first time in his young career. Plus, he moves into a better power park which elevates his already gargantuan raw power. Just look at him in the featured image for this article. That’s one strong man right there. Take a gander at his Statcast data below if you want more proof of that. 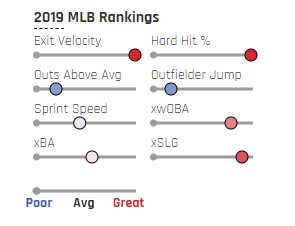 That’s a 99th percentile exit velocity, 98th percentile hard-hit %, and 89th percentile xSLG. Those are numbers worth of the Franimil nickname. Everyone has always known about Reyes’ power and now he isn’t being jerked around for playing time like he was for most of his time in San Diego. Roster Resource has Reyes batting 5th this season right behind Carlos Santana and Jose Ramirez, two annual OBP darlings (excluding J-Ram last season). It wouldn’t shock one stinking bit if Reyes put up a 35/110 season with 80-90 runs and a batting average that won’t kill you. A .250/85/35/110 line would put Reyes well above his ADP value and put him in top-50 overall discussion. He’s a damn steal in the middle rounds and firmly trending up in dynasty leagues. This guy can flat out mash.

The below image is one I’ll share until it’s no longer relevant.

I’m not saying Lourdes Gurriel is going to be as good or better than Gleyber Torres. But what I am saying is that he could be pretty close. When healthy in 2019, Gurriel was a beast playing at a near 40/12 pace. You can babble on about how the juicy baseballs fed into that, which they probably did to some degree, but let’s not discredit what Gurriel did entirely. He was well above league average in barrel%, launch angle, exit velocity, xSLG, and wOBA, and hard-hit%.

While the power was impressive, his contact metrics were less inspiring. Gurriel only posted a 69.1% contact rate, bu that was also right behind guys like Gary Sanchez, Eloy Jimenez, Jorge Soler, and Yoan Moncada, and right in front of Bryce Harper, Javier Baez, Keston Hiura, and Fernando Tatis Jr. So while it’s not a spectacular percentage, it’s not a death sentence either with how hard Gurriel hits the ball. With his power, 30-plus home runs can be expected over the course of a full season with close to double-digit steals along with it. As long as he can keep his batting average respectable in the .260-.270 range, there’s plenty of value here in dynasty leagues.

How To Evaluate Pitching: Stats, Tools, and Metrics